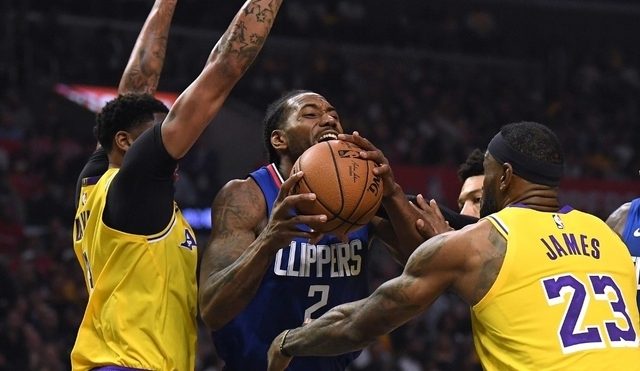 Kawhi Leonard pumped in 30 points, 6 rebounds, 5 assists, and 2 steals to lead 5 players in double figures as the Clippers came out triumphant in a battle of top title contenders from the Western Conference.

Playing in his first game with the Clippers since he left reigning NBA champion Toronto Raptors, Leonard struggled at first, missing his first two shots and committing back-to-back turnovers that contributed to a 13-2 Lakers start.

But as Leonard found his groove, so did the Clippers.

The Clippers turned a 22-25 first-quarter deficit to a 62-54 halftime advantage before outscoring the Lakers 27-17 in the final period to kickstart their championship campaign on the right foot.

Lou Williams finished with 21 points, 7 assists, and 5 rebounds, while Montrezl Harrell contributed 17 points, 7 rebounds, and 4 assists – both off the bench – for the Clippers.

“It was great. A lot of emotions, game one,” said Leonard, who grew up in Riverside, 50 miles east of Los Angeles.

“I am just happy we came out and got a victory. We had great practices and had some carry over from that tonight.”

Jamychal Green had 12 points and 6 rebounds and Mo Harkless chipped in 10 points, 4 rebounds, 4 steals, and 2 blocks in the win.

Danny Green, a former teammate of Leonard in championship teams with the San Antonio Spurs and the Raptors, put on a scoring clinic for the Lakers with 28 points off 7 three-pointers.

Anthony Davis played in his first official game for the Lakers and impressed with 25 points, 10 rebounds, 5 assists, and 2 blocks, but did not have much support with LeBron James the only other Laker in double digits with 18 points.

James still flirted with a near triple-double by picking up 9 rebounds and 8 assists as he proved just as deadly in his 17th season.

The Lakers hope that their offseason changes, highlighted by the James-Davis power pairing, will boost the team’s fortunes after they finished a disappointing 37-45 and failed to qualify for the postseason for the sixth season in a row. – With a report from Agence France-Presse