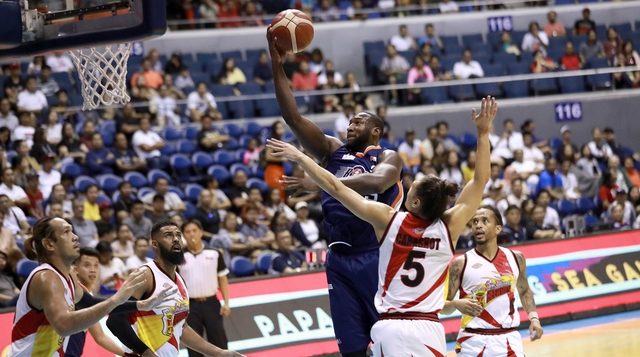 MANILA, Philippines – Magnolia drew prolific performances from Allen Durham and Baser Amer to shred San Miguel to pieces, 125-99, in the 2019 PBA Governors’ Cup at the Araneta Coliseum on Sunday, October 297.

Durham submitted a triple-double while Amer shot the lights out as the Bolts improved to 5-2 for the No. 3 spot and dealt the Beermen their third loss in the last 4 games.

The two-time Best Import of the Conference Durham had 29 points, 15 rebounds, and 11 assists in the dominant display that saw Meralco zoom to a 30-21 lead after the opening quarter and never look back.

San Miguel import Dez Wells then missed the entire second half due to an apparent left ankle injury – an unfortunate incident Durham and his side capitalized on to break the game wide open.

Durham scored half of the Bolts’ 28-point, third-quarter assault as they headed into the payoff period comfortably ahead at 92-70.

Amer chalked up 26 points off 4 triples to go with 7 rebounds and 5 assists while 4 of his teammates breached double figures, among them Chris Newsome, who had 14 points, 6 rebounds, and 6 assists.

Raymond Almazan added 12 points, 9 rebounds, and 2 blocks in the win, Bryan Faundo chipped in 10 points, while Allein Maliksi – who was traded from Blackwater to Meralco this week – had 12 points and 5 rebounds.

June Mar Fajardo paced the Beermen, who dropped to 5-3 after going unbeaten in their first 4 games, with 31 points and 13 rebounds as Wells still put up 18 points despite playing only 18 minutes.

Losing Wells, though, evidently dented their chances of staging a comeback in the second half, considering he averaged 39.9 points prior to the match.

Alex Cabagnot was the only other San Miguel player in double figures with 12 points.