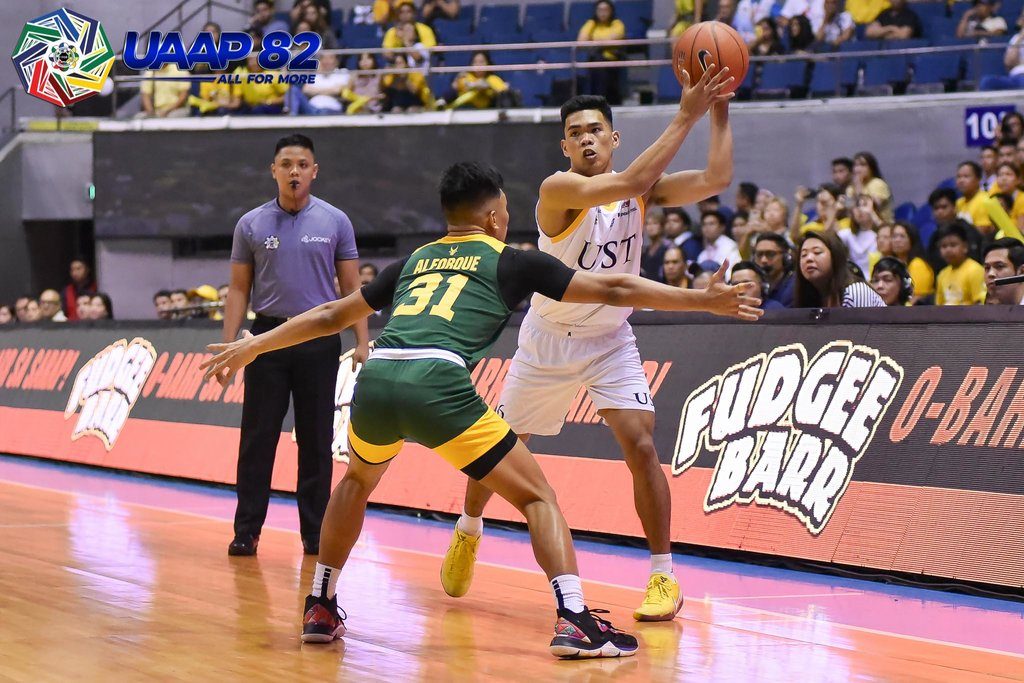 Facebook Twitter Copy URL
Copied
Despite blowing a huge lead, the UST Growling Tigers eliminate the FEU Tamaraws to face the UP Maroons next

MANILA, Philippines – The UST Growling Tigers survived a huge FEU rally and ousted the Tamaraws, 81-71, in the UAAP Season 82 stepladder semifinals at the Araneta Coliseum on Wednesday, November 6.

With the win, the streaking Tigers advance against the twice-to-beat UP Fighting Maroons on Sunday, November 10, still at the Araneta Coliseum.

Soulemane Chabi Yo, just hours after being named as this season’s MVP, helped get things back in order as the Tigers held off a rallying Tamaraws side.

(Right from the start of our season, it was really hard. We thought this game would be easy, but we’re up against FEU, it’s a team that doesn’t just give up.)

Straight off warmups, UST blazed white-hot with a 20-9 start thanks to Brent Paraiso’s streak from downtown.

The Tigers then extended the gap by as many as 26 points, 54-28, at the half. Within that run, graduating FEU center Barkley Ebona got two unsportsmanlike fouls, leading to the end of his collegiate career after the ejection at the 1:19 mark of the 2nd.

However, FEU slowly chugged along in the second half and got back within 8 points, 62-70, off a slick Hubert Cani layup with 8:09 left.

L-Jay Gonzales then cut the lead to 5, 65-70, off the and-one with 6:37 left in the regulation. However, he suffered cramps as Ino Comboy took the substitute free throw.

Unfazed, Renzo Subido and Chabi Yo conspired for two quick buckets to get back up 9, 74-65, at the final 5:34 mark as the Tigers held off the Tamaraws’ repeated comeback attempts in the closing minutes.