Nov 12, 2019 5:33 PM PHT
Agence France-Presse
Facebook Twitter Copy URL
Copied
'Thanks for all those years. It was a crazy ride,' says Tony Parker in his emotional jersey retirement ceremony 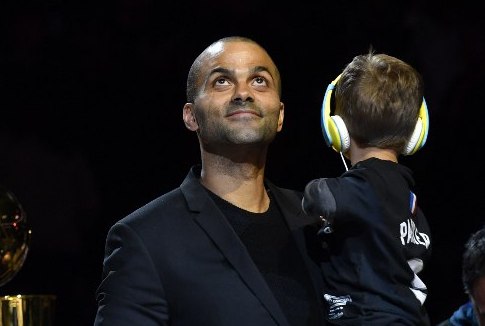 WASHINGTON, USA – French NBA star guard Tony Parker was given an emotional tribute Monday, November 11, by the San Antonio Spurs, who retired his No. 9 jersey in a post-game ceremony after a loss.

Parker won 4 NBA titles in 17 seasons with the Spurs, joining the club in 2001 and becoming a starter as a 19-year-old European newcomer after only 4 games.

He averaged 15.5 points, 5.6 assists and 2.7 rebounds over 1,254 career NBA games, playing a final campaign last season with Charlotte after making his fame with San Antonio.

“Thanks for all those years,” Parker said. “It was a crazy ride.”

After Memphis beat the Spurs 113-109, the ceremony saw several former teammates and coach Gregg Popovich pay tribute to Parker, who led the AT&T Center crowd in a final cheer before watching his number unveiled among the others in the arena rafters.

“I want a big ‘Go Spurs Go.’ Can we do it one last time for me?” Parker exhorted the spectators, who reward him with a memorable final cheer.

The most emotional moments came when Popovich spoke about the player he doubted at first, then helped mold into an NBA superstar.

“Tony, I want to apologize for all the physical and mental abuse I gave you the whole time you were here,” Popovich said with a smile.

“I’ve been the luckiest guy in the world to see you from age 19 to this point. I feel fortunate I was there to see it all. I love you.”

Coach Popovich brings the jokes and kind words to @tonyparker before his #9 jersey gets raised to the rafters! #MerciTony

Watch the ceremony on https://t.co/Pqxh2EPubW or the NBA app pic.twitter.com/62k5Xb3oIL

Popovich expects Parker soon to be named to the Basketball Hall of Fame.

“Pretty soon we’re going to be there when you enter the Hall of Fame,” he said. “That’s pretty amazing. You have done amazing things. You’ve made my life richer” although he joked, “I spent any money on wine you taught me all about.”

Parker appreciated the lessons he learned about the NBA and life from Popovich.

“You are always the boss but on this night I am,” Parker said with a smile.

“For me, the impact you had in my life – you were the unbelievable second dad to me, the way you taught me stuff and made me better.

“Thanks for believing in me. You inspire me. You taught me a lot and I’ll be thankful forever.”

All spectators received a black “Merci Tony” T-shirt, the silver lettering accompanied by a drawing of Parker going up for a shot.

Fellow Frenchman said of Parker: “There’s no way you can talk about French basketball without Tony.”

Argentine star guard Manu Ginobili, who recalled being showed around as a newcomer by confident teen Parker, said, “It has been a pleasure man. I wish you all the best.”

"From day one, his optimism and confidence… it'd really get me going."@manuginobili looks back at the memories from he and Tony's time with the @spurs! #MerciTony pic.twitter.com/pREkLvzAO9

Ex-Spurs star Sean Elliott called Parker “an absolute master in the open court with his speed only matched by his heart.”

Australian guard Patty Mills, a current Spurs standout, looked to him as an idol growing up.

“As a small point guard coming from overseas, he’s someone I watched and looked up to — he has been an inspiration for sure.” – Rappler.com