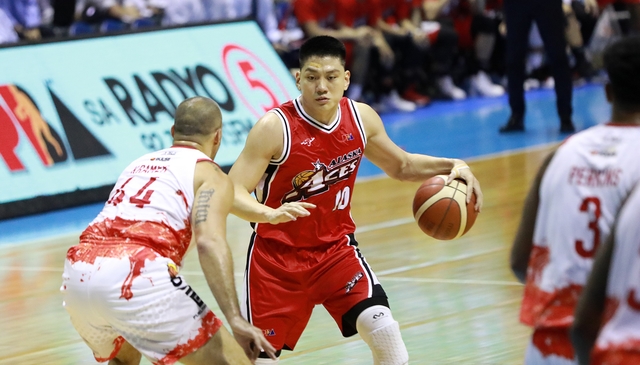 MANILA, Philippines – Alaska may have solidified its playoff bid in the PBA Governors’ Cup with a 105-102 conquest of Phoenix, but it was not all roses as Jeron Teng suffered an apparent knee injury.

Teng subbed out with less than a minute remaining and did not finish the contest on Wednesday, November 13, after his right knee collided with the back of Justin Chua during a rebounding battle.

Chua landed on his back and bumped into Teng, who immediately clutched his knee following the impact and looked to be in significant pain.

Fortunately, Alaska held on to the win without Teng – who had 17 points, 8 rebounds, and 4 assists before his departure – as it forced a three-way tie with NorthPort and Columbian for the last two playoff spots.

“I hope he’s good. I’m not sure. His reaction when he sat down on the bench was hitting the chair. So it doesn’t seem like it’s good. That means he feels something,” Alaska coach Jeff Cariaso said.

Teng was one of the last Alaska players to exit their locker room and he needed to be assisted by a team personnel and his girlfriend out of the Araneta Coliseum.

Losing Teng would deal a huge blow for Alaska, especially since his return sparked their resurgence in the season-ending conference.

Missing the first 5 games of the conference – all ending in losses – due to a hamstring injury, Teng came back and steered Alaska to its first win.

His presence has done nothing but wonders for the team as Alaska won 4 of its last 5 games to barge into the playoff picture after starting the Governors’ Cup at the bottom of the standings.

Barring any serious injury, Teng will have a full week to recover before Alaska takes on league-leading NLEX next Wednesday, November 20, at the Ynares Center in Antipolo City. – Rappler.com