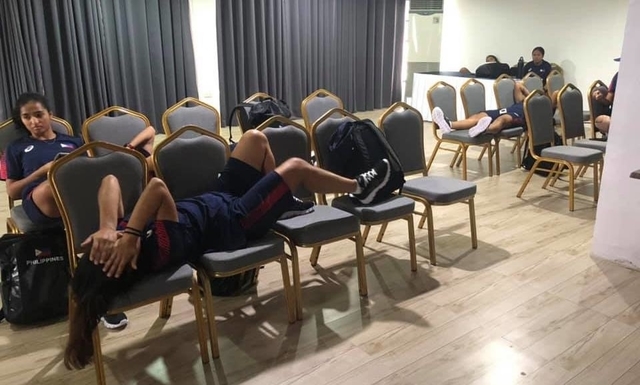 MANILA, Philippines – There’s no sparing even the Philippine athletes.

The country’s own women’s football squad suffered the same problems that troubled visiting teams from rival countries in the run-up for the Southeast Asian Games.

Hali Long, a veteran member of the Philippine team, revealed she and her teammates were forced to wait at a function room at the hotel where they are billeted since their rooms were not ready. (READ: Football teams grumble: SEA Games hosting chaotic)

“Arrived to our SEAG hotel at 11:30 am. Rooms weren’t ready yet, so we ate lunch while they fixed our rooms. Instead of two per room, we’ve adjusted to 4 to 5 per room,” Long wrote on Facebook on Sunday, November 24.

“It’s now 2:15 pm and the rooms aren’t ready. They moved us to a function room, so we wouldn’t crowd the lobby for other arriving teams.”

Transportation and accommodation woes were highlighted over the weekend as Cambodia, Timor Leste, Myanmar, and Thailand experienced difficulty upon their arrival in the country.

But hours after the Philippine Southeast Asian Games Organizing Committee (PHISGOC) apologized for their shortcomings, Long bared their own “sad” experience.

“Sad that we’re the host team and this is how we’re being treated. I can’t imagine how other countries must feel,” Long said.

The Philippines will face Myanmar for its tournament-opener at the Biñan Football Stadium in Laguna on Tuesday, November 26. – Rappler.com