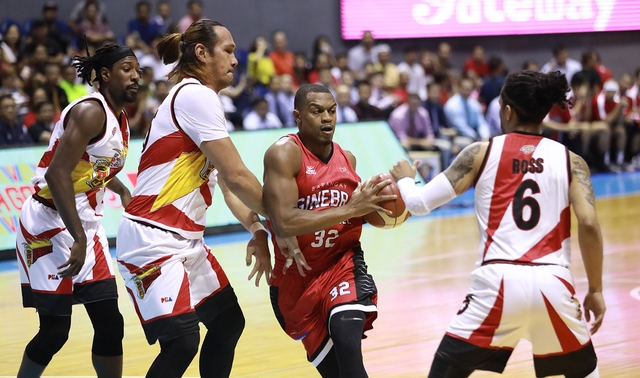 MANILA, Philippines – History repeated itself as Barangay Ginebra denied San Miguel a Grand Slam with a 100-97 quarterfinal win in the 2019 PBA Governors’ Cup at the Araneta Coliseum on Sunday, November 24.

Import Justin Brownlee carried the scoring load and came up with a crucial defensive stop in the final minute for the Gin Kings, who capitalized on their twice-to-beat incentive to punch their ticket to the semifinals.

While he led the game in scoring with 41 points, it was on the defensive end where Brownlee shone the brightest after blocking a potential game-tying triple from Terrence Romeo as his side held on for the win.

Romeo found himself slightly open from beyond the arc with 13 seconds left only to witness Brownlee swat his shot out of bounds.

The Beermen had plenty of time to send the game to overtime but were forced to settle for a long Chris Ross trey which hit only the back iron as it signaled the end of their quest for a rare Triple Crown.

It was a déjà vu of sorts for Barangay Ginebra, which also prevented San Miguel from completing the feat done only 5 times in PBA history with a dominant quarterfinals win in the 2017 Governors’ Cup.

But the Gin Kings had to fight tooth and nail to avoid a do-or-die match.

A Romeo bucket gave the Berrmen a 95-93 advantage with 3 minutes remaining before Brownlee and Stanley Pringle put the opposing side on the front seat with a triple and a layup in consecutive fashion.

John Holland narrowed the gap for San Miguel to 97-98, but Pringle, who finished with 24 points and 5 assists, made it a three-point play for Barangay Ginebra with a pair of freebies in the last 30 seconds.

June Mar Fajardo had 24 points, 18 rebounds, and 2 steals for the Beermen, who lost their last 3 games and were reeling from the absence of Arwind Santos, Kelly Nabong, and Ronald Tubid due to suspension.

San Miguel seemed primed to capture its second Grand Slam in franchise history after a 4-0 start to the conference but lost 6 of its last 8 outings.

Holland ended his stint with the Beermen winless despite firing 20 points, 8 rebounds, and 2 steals, while Mo Tautuaa and Alex Cabagnot had 12 and 11 points, respectively, in the crushing loss.