Nov 26, 2019 12:28 PM PHT
Rappler.com
Facebook Twitter Copy URL
Copied
The SEA Games will serve as the zonal qualifier for the AVC Continental Cup Finals where an Olympic berth is at stake 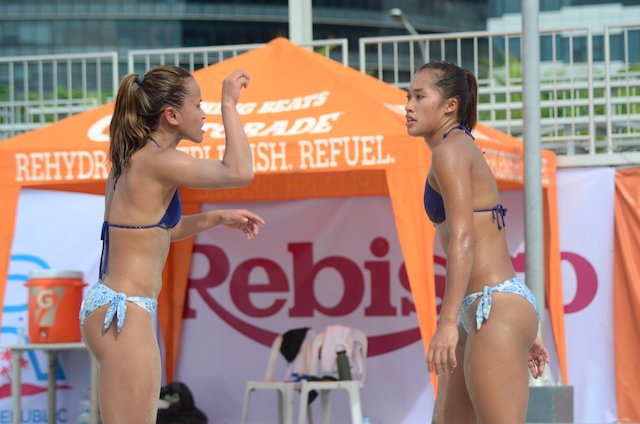 MANILA, Philippines – As the Philippines vies for a podium finish in the 2019 Southeast Asian Games beach volleyball competition, the country’s bets also hope to gain a spot in next year’s AVC Continental Cup Finals.

The regional biennial meet will serve as the Southeast Asian Zonal qualifier for the continental tournament, so the women’s and men’s squads have been training doubly hard for the tournament which begins on Friday, November 29, at the Subic Tennis Court. (ATHLETE’S CORNER: Sisi Rondina pours out love for volleyball)

“The Philippine beach volleyball teams have been staying in Subic since last Friday, training and preparing hard for the games,” said team manager Charo Soriano, who is also the Beach Volleyball Republic founder.

“We are fortunate to be able to be at the venue early and we are scheduling training both in the morning and in the evening so the athletes can get used to the sand and lighting conditions,” she added.

The pairs Sisi Rondina and Bernadeth Pons, and Dzi Gervacio and Dij Rodriguez will lead the women’s team, while Edmar Bonono and Jude Garcia, and Jaron Requinton and James Buytrago will banner the men’s side.

The team had a good warm-up via the recently concluded 2019 Rebisco Beach Volleyball International Open at Sands SM By The Bay which boosted the country’s preparations to the SEA Games.

“Everybody is excited. The coaching staff, management staff and the players. We have been waiting this opportunity to bring pride to our nation. And we will make sure to give our all,” said Soriano.

The Philippines last won a medal in 2005 courtesy of the Fil-Am pair of Heidi Ilustre and Diane Pascua. Also, the beach volleyball event is back in the SEA Games after an eight-year absence.

When the regional beach volley action wraps up on December 6, the gold medalists in the men’s and women’s categories will advance to the third phase of the AVC Continental Cup (Finals) in June, while the silver medalists will qualify for the second phase (semifinals) early next year. The Continental Cup champion will then book a spot in the 2020 Tokyo Olympics.

Despite all the tremendous odds, the Philippines is ready to bring its A-game against the best sand court players in the region. – Rappler.com