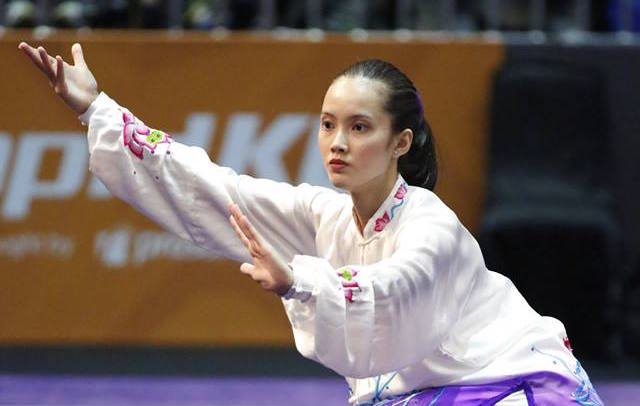 MANILA, Philippines (UPDATED) – Agatha Wong dominated the 2019 Southeast Asian Games wushu competition once again as she defended her title in the women’s taolu taijiquan on Sunday, December 1 at the World Trade Center.

Wong scored 9.67 in the final round to snatch the Philippines’ second gold medal in the regional biennial meet.

Brunei’s Basma Lachkar tallied 9.55 to pick up the silver and narrowly edged Vietnam’s Thi Minh Huyen Tran, who scored 9.53 for the bronze.

Although many had high expectations of her, Wong made sure that she didn’t dwell on the pressure of another golden performance.

“I didn’t expect anything, maski na they’ve written articles about me na parang, double-gold standard,” said the 21-year-old. “I’m really happy na I delivered the gold, and I have no regrets for today.”

(I didn’t expect anything even if they’ve written articles about me that I’m up for a double-gold. I’m really happy that I delivered the gold, and I have no regrets for today.)

After falling short in 2017, veteran Daniel Parantac returned to the podium with a bronze in the men’s taolu taijiquan event.

Parantac started the competition with a score of 9.56, but Malaysia’s Loh Choon How followed with a golden performance that merited a score of 9.68.

Philippine bet Jone Inso was also in the running for a bronze after a 9.54 tally, but the last performer Zheng Yu Hosea Wong of Brunei bumped him off and copped the silver with 9.59 points. – Rappler.com