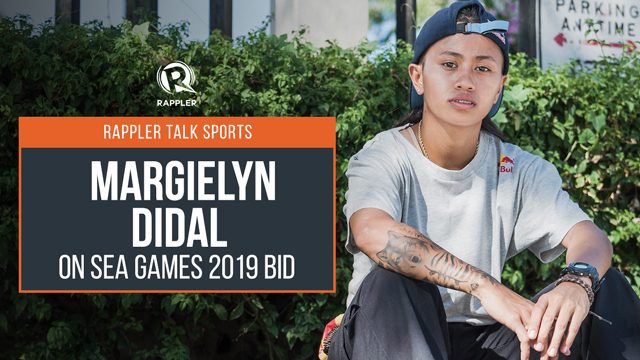 CLARK, Philippines – As the reigning Asian skateboarding champion, Margielyn Didal doesn’t want to settle for anything less than a double gold in the 2019 Southeast Asian Games.

Rappler sits down with the spunky 20-year-old standout as skateboarding debuts in the regional biennial meet.

Didal, who won the inaugural 2018 Asian Games crown, kicks off her campaign in the women’s Game of S.K.A.T.E. event on Wednesday, December 4, and also aims for a top finish in the women’s street event at the Tagaytay City Extreme Sports Complex.

Ranked No. 14 in the world, the Cebuana standout has been busy competing in international events to boost her qualification bid for the Tokyo 2020 Olympics. But for now, Didal just relishes the chance to perform in front of her family and friends for the first time in her career. (WATCH: Margielyn Didal stands up for PH skate scene) – Rappler.com