Ancajas retains world crown by 6th round TKO in Mexico 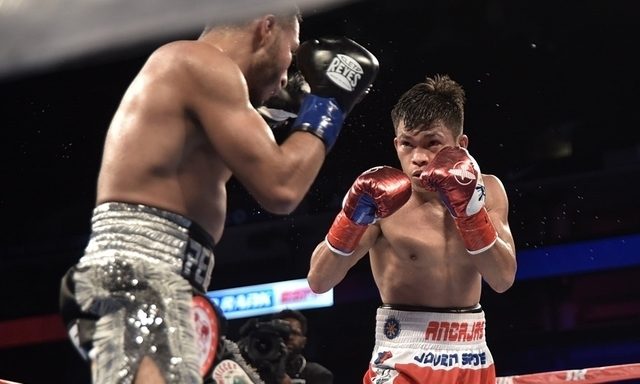 Landing hooks and crosses to the head, Ancajas wobbled the Chilean in the 6th before landing more punches, prompting referee Wayne Hedgpeth to call a halt at the 1:53 mark.

Ancajas’ eighth defense of the 115-point title improved his chances of forging a unification showdown with the division’s bigwigs led by Mexican Juan Francisco Estrada.

It was a performance reminiscent of Ancajas’ TKO victory over Japanese Ryuichi Funai after the seventh-round bell rang on May 4 in Stockton, California, with the pride of Panabo City letting his hands fly early after Gonzalez went for the body.

Faster and stronger, Ancajas forced Gonzalez to switch to defensive mode by the 4th round, softening the Chilean with combinations before going for the kill starting in the 5th.

Showing no ill effects of the cancellation of his title duel against original rival Jonathan Rodriguez last November 2, Ancajas was sharp and accurate from the start as he followed the fight plan charted by chief trainer Joven Jimenez.

Their decision to remain in Redondo Beach, California, where they’ve been holed up since October 18, to resume training rather than return home, paid dividends as Ancajas’ stature as elite fighter rose along with his marketability.

Jobert Alvarez, who served as Ancajas’ training and sparring partner in the US, also won by unanimous decision against Mexican Luis Alberto Escobedo Garcia in their six-rounder.

The Seattle-based Alvarez climbed to 20-2-2 with 7 knockouts under the tutelage of Dodong Llagas, who provided company to Jimenez.

Apart from Gibbons, other members of Team Ancajas in Mexico were assistant trainer Fernando Parcon and nutritionist-dietitian Jeaneth Aro. – Rappler.com