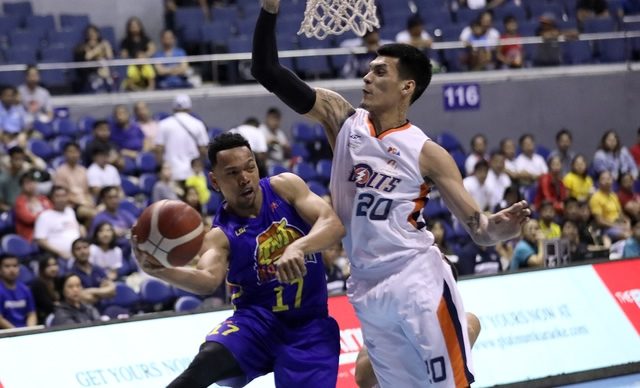 MANILA, Philippines – KJ McDaniels bucked a rocky first half as TNT moved a win away from the finals of the 2019 PBA Governors’ Cup with a 101-97 win over Meralco at the Araneta Coliseum on Thursday, December 19.

The former NBA player missed his first 8 field goals but found his touch in the second half and finished with 18 points, 14 rebounds, and 2 blocks to propel the KaTropa to a 2-1 lead in the best-of-five semifinals series.

With the Bolts knocking within a point, McDaniels hit the biggest shot of the game when he sank an off-balanced putback off a Jayson Castro miss that gave his side a 100-97 lead with less than 40 seconds left.

Two missed free throws from Roger Pogoy in the ensuing play opened the comeback door ajar for Meralco, but TNT held on to the hard-earned victory thanks to a crucial turnover by import Allen Durham.

Durham was trying to find a teammate to assist for the game-tying three-pointer before dishing a pass in the direction of Cliff Hodge, who had his hands up on the sidelines as if he was asking for the ball.

Hodge, however, had already been subbed out and could not catch the rock.

Castro, who chalked up 17 points, 10 assists, and 4 steals, then secured the win for the KaTropa by splitting his foul shots.

Troy Rosario paced TNT with 25 points, Roger Pogoy bounced back from his scoreless Game 2 outing with 15 points and 8 rebounds, while Ray Parks had 12 points, 7 rebounds, 5 assists, and 3 steals.

Durham delivered 32 points, 19 rebounds, and 7 assists in another monster performance, but his turnover just proved too costly as Meralco now teeters on the brink of another semifinals exit in the Governors’ Cup.

Chris Newsome had 20 points, Baser Amer put up 19 points and 5 assists, while Bong Quinto added 8 points in the loss.

Game 4 is on Saturday, December 21, at the Ynares Center in Antipolo City.