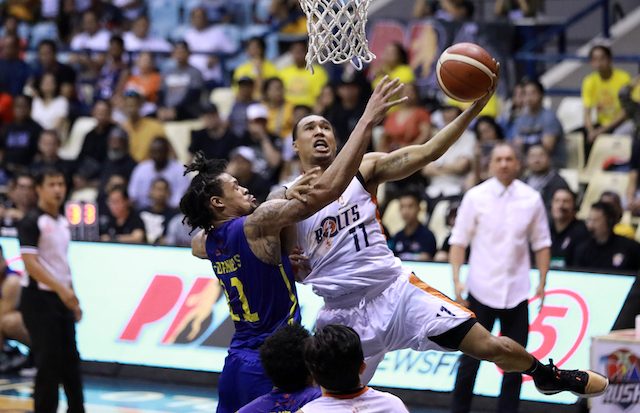 ANTIPOLO, Philippines – TNT failed to contain Allen Durham and Meralco cruised to an 89-78 win to capture the last finals berth in the 2019 PBA Governors’ Cup at the Ynares Center on Monday, December 23.

Stopping Durham was the top priority for the KaTropa going into the semifinals match, but the two-time Best Import of the Conference churned out a near-triple-double outing as the Bolts won the best-of-five series, 3-2.

Durham, seeking a third finals appearance in the Governors’ Cup in the last 4 seasons, was not to be denied with 28 points, 10 rebounds, and 8 assists to help Meralco set up another finals date with Barangay Ginebra.

It will be the third time that the two teams will meet in the finals of the season-ending conference, with the Bolts eyeing to exact revenge on the Gin Kings, who won the crowns in the 2016 and 2017 editions.

“We already had two rounds with Ginebra. We’re looking forward to the third round and come out with the victory this time,” said Meralco coach Norman Black.

The best-of-seven finals series will kick off on January 8 next year.

But it was not just Durham who shone in the series clincher as rookie Bong Quinto had his finest PBA game with a career-high 19 points, sparking an early fourth-quarter run that completely put the Bolts ahead.

Quinto scored a three-pointer, converted an and-one, and buried a jumper for a personal 8-1 spurt that led to a 14-3 run, which Meralco used to pull away after ending the first 3 quarters ahead by a slim 66-61 lead.

The KaTropa never recovered as they were outscored 36-52 in the final two quarters after leading 52-37 at halftime.

Chris Newsome had 23 points, 8 rebounds, and 4 assists in the win, while Allein Maliksi added 11 points and 2 steals off the bench.

Import KJ McDaniels had his usual performance of 30 points, 13 rebounds, 2 blocks, and 2 steals, but his numbers were not enough for TNT to reach the finals for the second straight conference this season.

Ray Parks chipped in 15 points and 10 rebounds, Jayson Castro put up 11 points, 6 rebounds, 4 assists, and 2 steals, while Troy Rosario and Roger Pogoy pumped in 10 points each in the losing cause.