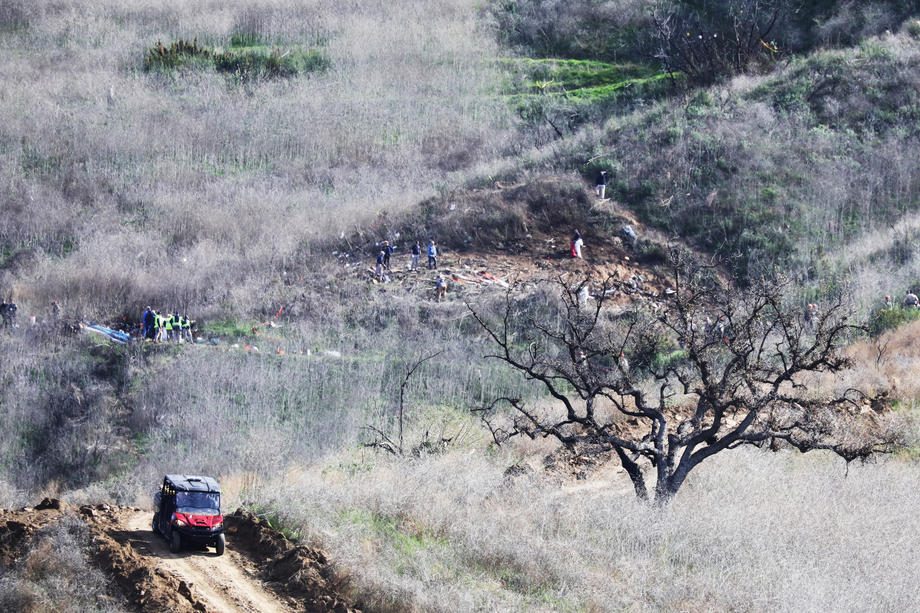 LOS ANGELES, USA – Federal investigators on Monday, January 27 sifted through the wreckage of the helicopter crash that killed basketball legend Kobe Bryant and 8 other people, hoping to find clues to what caused the accident that stunned the world.

Bryant, 41, was traveling Sunday with his 13-year-old daughter Gianna and 7 other passengers and crew when the Sikorsky S-76 slammed into a rugged hillside in thick fog in Calabasas, northwest of LA. There were no survivors.

A five-time NBA champion for his only team, the LA Lakers, and a double Olympic gold medalist, Bryant is widely regarded as one of the greatest basketball players in history.

He was traveling on his private helicopter from Orange County, where he lived, to his Mamba Sports Academy in Thousand Oaks where his daughter was set to play.

Jennifer Homendy, a member of the National Transportation Safety Board, told a press conference that investigators would remain at the site of the crash throughout the week to collect evidence.

“It was a pretty devastating accident scene,” she said, adding that the wreckage was strewn across about 600 feet (180 meters).

“We will be here about 5 days on scene to collect perishable evidence,” she said. “We are not here to determine the cause of the accident. We will not determine that on scene.”

Homendy said the aircraft did not have a black box, which was not required on that type of helicopter.

Los Angeles County Sheriff Alex Villanueva told reporters that it would “take a while” to recover the remains of the victims because of the force of the crash and the rugged terrain.

He added that given the number of people trying to access the site unlawfully, his agency has had to resort to police on horseback or all terrain vehicles to secure the area.

“We want to make sure everyone stays where they should be … and keep everyone safe because the area is dangerous even in daytime because of the steepness of the terrain,” he said.

Philippe Lesourd, a helicopter pilot and instructor who has been flying in California for 29 years, told AFP that the heavy fog likely caused the pilot to lose control of the aircraft.

He said he pilot most probably suffered “spatial disorientation” after losing sight of the ground upon entering the clouds.

The fog was heavy enough on Sunday that the Los Angeles Police Department and the sheriff’s office grounded their helicopters for part of the day.

Witnesses told local media the helicopter appeared to be flying very low and seemed to struggle before it slammed into a hillside.

Dozens of firefighters and paramedics battled across hilly terrain to reach the flaming wreckage but found no survivors.

Villanueva said the recovery effort would probably take days because the steep terrain at the crash site made it a “logistical nightmare.”

Apart from Bryant and his daughter Gianna, the other passengers on the flight included baseball coach John Altobelli, his wife Keri and their daughter Alyssa, who played basketball at the same club as Gianna.

Christina Mauser, an assistant coach of the Mamba girls’ basketball team, was also killed along with Sarah and Payton Chester, a mother and daughter.

News of the crash reverberated across the globe and hundreds gathered at the Staples Center in downtown Los Angeles, where Bryant wowed fans for 20 years, placing flowers, candles and messages for their fallen hero.

“It’s unbelievable that he is gone,” said Esmeralda Cisneros. “Everyone feels empty. California and LA feel empty without him.

Tributes have also flooded in from former US presidents, pop stars and athletes from different sports, a sign of how the man known as the “Black Mamba” had transcended basketball.

“Kobe was a legend on the court and just getting started in what would have been just as meaningful a second act,” Barack Obama tweeted.

The NBA announced that it had postponed Tuesday’s Lakers game against the Los Angeles Clipper in the wake of the tragedy.

“The decision was made out of respect for the Lakers organization, which is deeply grieving the tragic loss of Lakers legend Kobe Bryant, his daughter Gianna and seven other people in a helicopter crash on Sunday,” a statement said.

Bryant’s career began in 1996, straight out of high school. On top of his NBA championship wins, he helped the US squad of all-stars to Olympic titles in 2008 in Beijing and 2012 in London.

Bryant bowed out of the NBA in 2016, scoring 60 points in a fairytale farewell appearance at the Staples Center.

The son of former NBA player Joe “Jellybean” Bryant, the Lakers legend was born in Philadelphia while his father played for the 76ers.

The elder Bryant played from 1984 to 1991 in Italy, giving young Kobe a global worldview as he grew up dreaming of following his dad into the NBA.

He would eventually join the ranks of professionals at the age of 17, jumping directly into the NBA, only the sixth player to make such a leap.

At 18, Bryant became, at the time, the youngest player or starter in an NBA game and the youngest winner of the NBA Slam Dunk Contest.

With Bryant alongside Shaquille O’Neal, the Lakers captured 3 straight NBA crowns from 2000-2002, returning the team to glory days unseen since 1988.

Bryant’s career was almost derailed in 2003 when he was arrested in Colorado over a sexual assault complaint filed by a 19-year-old hotel employee where Bryant was staying ahead of knee surgery.

He admitted to adultery but denied an accusation of rape and the case was dropped in 2004 after the accuser refused to testify.

A separate civil suit was settled under terms kept private.

After his playing career, Bryant branched out into the entertainment industry.

In 2018, he won an Oscar for his animated short film “Dear Basketball,” a love letter to the sport which brought him fame and fortune. The film was made available for free on Monday on Vimeo and the dearbasketball.com website. – Rappler.com