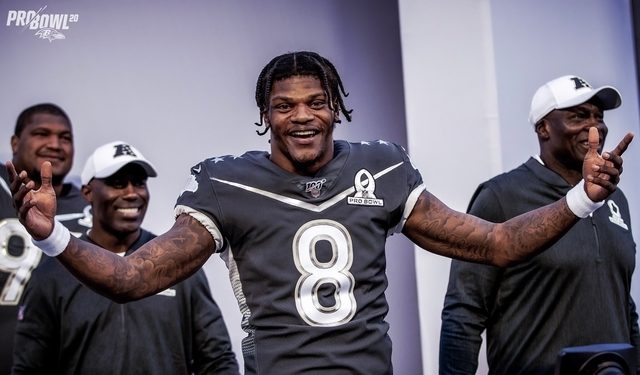 MIAMI, USA – Baltimore Ravens quarterback Lamar Jackson swept the board to be named the NFL Most Valuable Player award for 2019 on Saturday, February 1, in recognition of his record-breaking season.

The 23-year-old became only the second player in NFL history to be a unanimous pick for the honor after Tom Brady in 2010, winning all 50 first-place votes.

Jackson’s MVP award came at a ceremony in Miami on the eve of the Super Bowl between the San Francisco 49ers and Kansas City Chiefs.

The Ravens quarterback had been seen as a shoo-in for the award after a year which saw him rush for 1,206 yards to break Michael Vick’s single-season rushing record.

He amassed 47 tackles, 9 sacks, an interception, and a forced fumble during a stellar debut regular season after being selected by the 49ers with the No. 2 overall pick in the 2019 draft.

The 22-year-old from Fort Lauderdale wins the Defensive Rookie of the Year award 4 years after elder brother Joey of the Los Angeles Chargers won the same honor.

New Orleans Saints wide receiver Michael Thomas earned Offensive Player of the Year after a season which saw him set a new record for receptions with 149 catches and 1,725 receiving yards.

Arizona Cardinals quarterback Kyler Murray, the No.1 pick in the draft last year, won the Offensive Rookie of the Year award after a debut season which saw him finish with 349 completions and 3,722 passing yards.

His completions total is the third-highest-ever accumulated by a rookie quarterback.

Baltimore head coach John Harbaugh took home the Coach of the Year award after his team finished with a 14-2 record, including a 12-game winning streak.

The Ravens’ season came to an abrupt end in the playoffs when they were eliminated by the Tennessee Titans in the first round.

The 57-year-old Harbaugh is one of the longest-serving head coaches in the NFL, having been appointed by the Ravens in 2008.