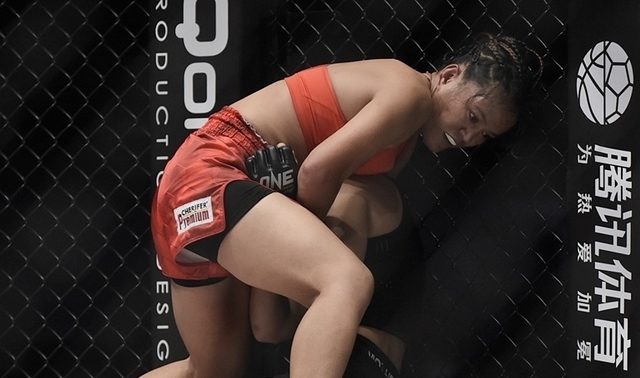 Facebook Twitter Copy URL
Copied
Coming off a gold-medal win in the 2019 SEA Games, Gina Iniong starts the year on a high note in ONE Championship

MANILA, Philippines – Gina Iniong carried her winning ways from her kickboxing gold-medal triumph in the 2019 Southeast Asian Games to ONE Championship.

Iniong started the year on a high note after picking up a unanimous decision win over India’s Asha Roka in ONE: Fire and Fury on January 31 as she showed off her improved ground game.

The veteran brawler out of Team Lakay pinned Roka, who is unbeaten in boxing, to the ground and sneaked in a slick guillotine attempt late in the second round.

“Our game plan was to take Roka down because that’s her weakness,” Iniong said in a mix of Filipino and English.

That was the third win in the last 4 fights for Iniong, who hiked her record to 9-4.

Aside from getting hyped up by the supportive home crowd, Iniong also drew extra motivation from her father and husband, both of whom watched her compete in mixed martial arts live for the first time.

“They’re happy. You can see on their faces that they’re happy and proud,” Iniong said.

Despite admitting that she ran out of gas in what could have been a submission win, Iniong remained positive about her performance.

“Although I wasn’t able to submit her, I’m still happy. It was a good result and a good performance so I’m happy.” – Rappler.com