NFL star changes jersey to No. 24 in tribute to Kobe Bryant 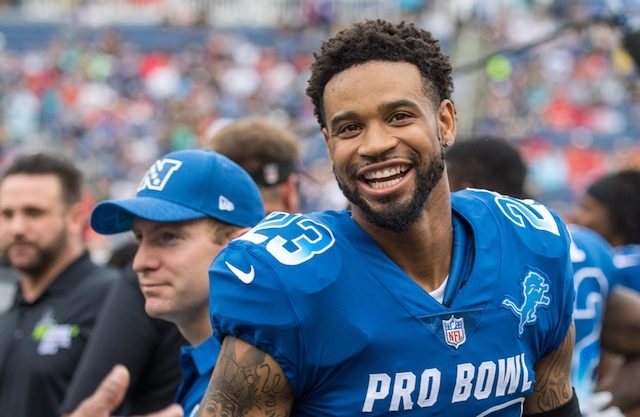 Facebook Twitter Copy URL
Copied
Defensive back Darius Slay will start his stint for the Philadelphia Eagles with a new jersey number after wearing No. 23 during his first 7 seasons in the NFL

LOS ANGELES, USA – New Philadelphia Eagles defensive back Darius Slay says he will change his NFL jersey to No. 24 in tribute to the late NBA legend Kobe Bryant.

The 29-year-old cornerback, who was traded to the Eagles on Friday, March 20, by the Detroit Lions, announced his plan in a social media post.

“I’m going Kobe mode,” Slay said. “Black Mamba, baby. Rest in peace to the GOAT (greatest of all time). One of my favorite players.”

Slay, who wore No. 23 while playing for Detroit for 7 seasons, signed a new three-year deal with Philadelphia on Saturday.

Slay is a three-time Pro Bowl player and was joint NFL leader in interceptions in 2017.

Bryant died in January at age 41 in a helicopter crash near Los Angeles that killed 8 others, including his daughter Gianna.

He played his entire 20-year NBA career with the Los Angeles Lakers, leading the club to 5 world titles during his stay.

Bryant was an 18-time NBA All-Star and the 2008 NBA Most Valuable Player and also helped USA capture Olympic gold in 2008 in Beijing and 2012 in London. – Rappler.com