Greatest team of the ’90s: Things to know about the Chicago Bulls 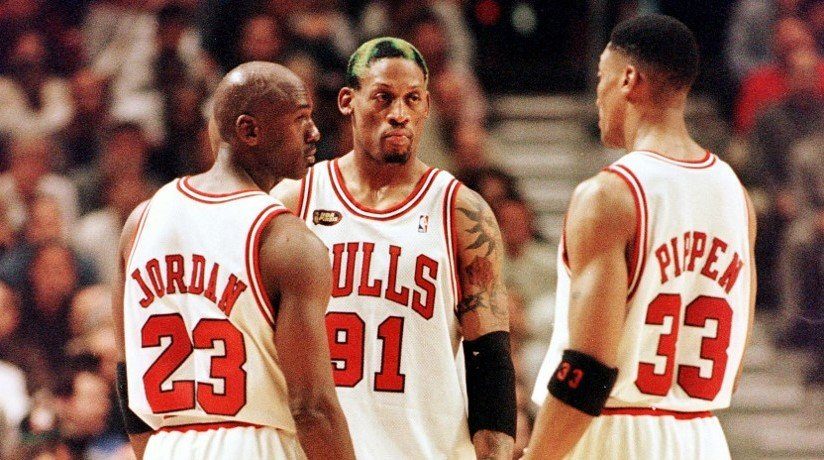 Facebook Twitter Copy URL
Copied
Dominating the NBA behind Michael Jordan and a bunch of notable supporting cast, the Bulls are credited for the rise in popularity of basketball and the league

MANILA, Philippines – The Chicago Bulls are undeniably the greatest and most influential NBA team of the 1990s.

Led by Michael Jordan, Scottie Pippen, and a bunch of notable supporting cast, the Bulls captured 6 titles in 8 years and eventually credited for the rise in popularity of basketball and the NBA.

Here are some things to know about the Bulls:

After succumbing to the Detroit Pistons in the Eastern Conference Finals for the second straight year, the Bulls got off to a rough start in their first title season as they lost the first 3 games of their 1990-1991 campaign.

But Jordan and the Bulls immediately got out of the rut, never dropping two consecutive games for the rest of the season. (READ: His Airness: Things to know about Michael Jordan)

Jordan never lost more than two in a row in his last 500 regular season games as a Bulls player and never dropped 3 games in a row in 126 playoff appearances during their dynasty.

The Bulls recorded 10 playoff series sweeps in those 6 championship runs and never played a Game 7 in the finals.

With the Bulls maintaining their place at the top of the basketball food chain, a handful of NBA legends never got to experience what winning a title feels like.

Among the unfortunate players whose peak coincided with that of Jordan and the Bulls were John Stockton, Karl Malone, Charles Barkley, Patrick Ewing, Reggie Miller, and Shawn Kemp.

Stockton, Malone, and the Utah Jazz came close to winning a championship in 1997 and 1998 but lost to the Bulls in both occasions in 6 games.

Barkley, meanwhile, was crowned the Most Valuable Player in 1993 and led the Phoenix Suns to the finals only to have his title aspirations dashed by Jordan and the Bulls, who won the series 4-2.

Kemp and the Seattle Supersonics were beaten in 6 finals games by the Bulls in 1996.

When Jordan retired after their first three-peat, the Knicks beat the Bulls in 1994 to reach the finals but eventually fell prey to the Houston Rockets.

Clyde Drexler and Gary Payton were both defeated by the Bulls in the finals but were able to win that elusive title later in their careers with the Rockets (1995) and the Miami Heat (2006), respectively.

Of the Bulls’ 6 championships, only two players were constant: Jordan and Pippen. (READ: Dance partner: Why Scottie Pippen was more than Michael Jordan’s sidekick)

It was only after the Bulls drafted Pippen and Horace Grant in 1987 that Jordan got past the first round of the playoffs.

Pippen averaged nearly 20 points in the regular season of each of the Bulls’ 6 titles, serving as a perfect running mate to Jordan, who led the NBA in scoring in those years.

No other Bulls player won more than 3 NBA championships.

Grant, John Paxson, Bill Cartwright, BJ Armstrong, Will Purdue, and Stacey King each captured 3 titles as part of the Bulls’ first three-peat from 1991 to 1993.

After Jordan retired momentarily in 1993, the Bulls rebuilt their team.

All good things come to an end

With Jordan retiring for the second time, Phil Jackson resigning from his post as head coach, and Pippen asking for a trade following their sixth NBA title, the Bulls never experienced the same success again.

From a reigning three-time champion, the Bulls plummeted to the bottom of the Eastern Conference in the lockout-shortened 1998-1999 season with a 13-37 record and stayed there for the next 3 years.

The franchise struck gold by drafting Derrick Rose in 2008, and as the youngest MVP in NBA history at 22, led the Bulls to the conference finals in 2011 – the farthest they reached in the playoffs since winning the title in 1998.

However, major injuries hit Rose, preventing the Bulls from taking off again.

To put to perspective how great the 1990s Bulls were, they won a combined 388 regular season games during their 6 title runs, more than the 387 won games the team accumulated from its last 9 seasons. – Rappler.com