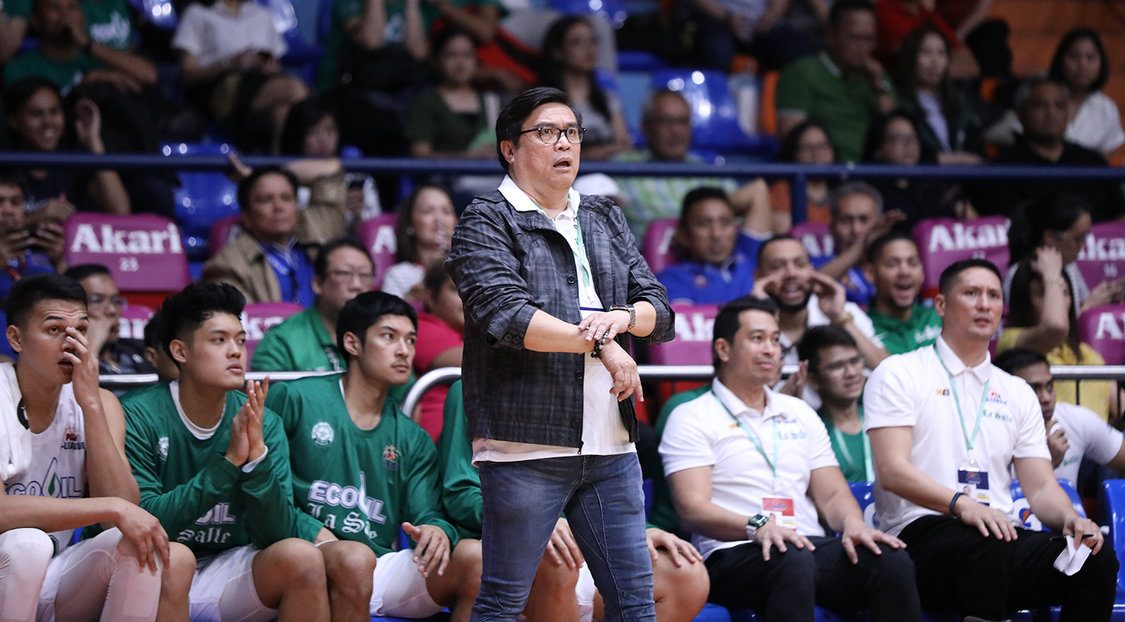 Facebook Twitter Copy URL
Copied
'We should not be down here,' says new La Salle coach Derrick Pumaren as the Archers continue to train remotely in a bid to reclaim lost glory

MANILA, Philippines – Even as the dynamics of everyday life have been changed due to the coronavirus pandemic, new De La Salle Green Archers head coach Derrick Pumaren said his team cannot afford to be “complacent” as they aim to return to UAAP Final Four relevancy.

The La Salle men’s basketball players, according to Pumaren, continue to work out remotely even as most of the country remains in quarantine.

“We’re trying to put some variety on everything,” Pumaren said in a recent coaching webinar organized by Hoop Coaches International.

“Until we get the final word [when we can return to practice], we still try to prepare the team as much as possible, get them ready, try to motivate them.”

“It gets boring too if it’s always an online workout. We put some variety on that and that is our job as coaches to do that for the players.”

Pumaren, who officially reunited with De La Salle back in January, led the Green Archers to UAAP championships in 1989 and 1990.

The opening of UAAP Season 83, originally scheduled for September, is now in flux as uncertainty looms on when live sporting events can take place again in the Philippines.

It has been reported that the opening of the collegiate league could potentially be delayed until the beginning of 2021. (READ: No UAAP basketball this year a possibility)

Even if that turns into reality, Pumaren doesn’t see it as an excuse for his Green Archers to become lackadaisical. For the veteran head coach, the responsibility to prevent that also falls on him and his staff.

“Trabaho natin yun (it’s our job) – how to motivate the players in getting ready. We are thinking probably next year, January, February, but the line of thinking for the team is… we must be ready,” he said.

“We [won’t] just start later on. We want to be a step ahead of other teams. We are trying to get back to the Final Four. We cannot just be complacent. We cannot have the same attitude we’ve had the last two seasons.”

Since winning the UAAP men’s basketball title in 2016 and returning to the finals a season later, it’s been a downward spiral for the Green Archers, who missed the Final Four in 2018 and 2019, much to the dismay of a fan base used to championship-or-bust expectations.

La Salle has had an issue with continuity. Since 2009, the program has had 7 different head coaches. One of them – Aldin Ayo, who now coaches the UST Growling Tigers – thinks DLSU will be a contender under its returning multi-titled head coach.

“Siyempre yung La Salle (Of course La Salle will be there),” said Ayo of the likely contenders next season. (READ: UST coach Ayo chimes in on quarantine, future of UAAP)

“I think magbabago yung takbo ng La Salle ngayon because of coach Derrick (La Salle will run differently under coach Derrick). I know him also. He’s one of the best coaches in the collegiate game.”

Ayo also expects the next men’s basketball tournament, whenever it returns, to be “unpredictable.”

Ateneo and UST, who competed in Season 82’s finals, are expected to return as title contenders, while UP and FEU will aim to return to the championship round.

La Salle, Adamson (coached by Derrick’s brother Franz), NU, and UE will attempt to break through and return to the Final Four.

Pumaren admits that will be a “big challenge, but it is not impossible.”

“The players right now understand; we understand each other [and] what we’re trying to achieve here,” he claimed.

“It’s not going to be a walk in the park for us. The La Salle community expect a lot from us.”

The early signs of Pumaren’s positive impact on the Green Archers were apparent when La Salle went 2-0 in the PBA D-League before sporting events were suspended in the country.

Displaying more resiliency on defense and better ball movement on offense, DLSU scored wins against Letran and CEU, although the latter victory – where La Salle prevailed after losing a double-digit lead – left Pumaren far from pleased.

“We should be up there,” Pumaren said of La Salle’s place in the UAAP hierarchy. “We should not be down here.”