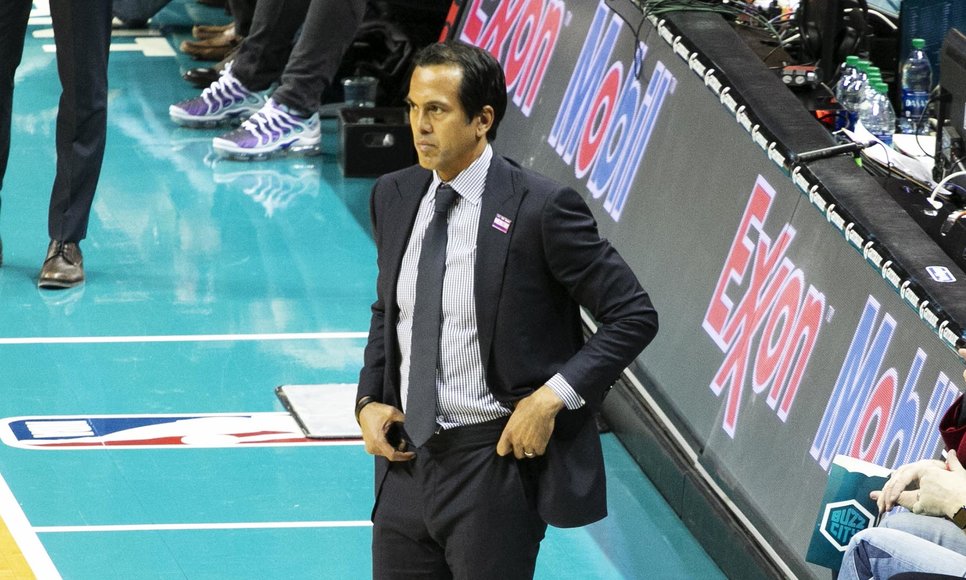 The Fil-Am mentor, in an online interview at #NBATogether with Ernie Johnson, shared the story of his journey from working backstage as a video coordinator to earning the right to call the shots on court.

“I wanted to get into coaching but remember, this is the mid ‘90s so the landscape was much different than it is right now,” Spoelstra said.

“When you’re in a video room, you never would think, ‘alright, this is going lead to a coaching position’.”

Spoelstra said he never thought of coaching an NBA team, not until he got an inspiring message from former Heat head coach Stan Van Gundy.

“(Stan) is one of my favorite people, one of my biggest mentors,” he said. “Pat (Riley) is my biggest mentor and he’s guided me through this journey, but Stan was the first coach that really gave me confidence on the floor, player development.

“He wrote me a letter once that I still have and I’ll never forget that he said ‘Hey, you can be a head coach in this league, you need to start thinking differently and open up your mind to that.’ That’s one of the most impactful things that I ever received in my life.”

The 49-year-old coach has been with the Heat for 25 years and the head coach of the team for 12 years.

Still, Spoelstra can vividly remember the day when Riley called him to the office in 2008 and told him that he would be the head coach of the squad that finished the season with a woeful 15-67 record.

“It would probably be as you imagine – like a Godfather scene,” said Spoelstra. “He brought me in after that season on Saturday and the lights were down, I would sit on the other side of desk of him, I can barely make out his face but he could see me.

“He said ‘Hey I’m done. You know this day was coming, and you’re ready for it. This is going to be like you’re up on a bird’s nest and I’m just gonna push you off the branch and you’re gonna figure out how to fly.’”

Right after the meeting, Spoelstra said he immediately shred the news to his parents – his father Jon, a former NBA executive, and Filipino mother Elisa Celino, who traces her roots in San Pablo City, Laguna.

Spoelstra credited his father, who worked as general manager for the Portland Trail Blazers and Denver Nuggets, for the support and advice he gave early in his career.

“My dad knew how improbable this path was to a head coaching position in this league,” Spoelstra said.

“There’s only 30 jobs. My dad’s been around long enough (in the league) so he was thrilled. My parents were thrilled.”

Since he took the head coaching position, Spoelstra has won two championships – both during Miami’s Big 3 era – and steered the Heat to the finals for 4 straight seasons from 2010 to 2014.

Superstars LeBron James, Dwyane Wade and Chris Bosh led the Heat, but another big-time player in their roster was veteran shooter Ray Allen.

Back in Game 6 of the 2013 NBA Finals against the San Antonio Spurs, Allen made one of the most historic shots in the league – a last-second corner triple off Bosh’s offensive board that forced the game to overtime and saved the Heat from being eliminated.

Spoelstra revealed during the interview how Allen developed and built that shot.

“What I remember from this play is the first day Ray came into our building in early September,” Spoelstra said. “He was working on a drill with one of our coaches on the far end.

“(Allen) would lay down in the middle of the key and then pop up, back pedal and ask the coach to throw him the ball. (Riley and I) went and asked him what is that drill, we never seen anybody do something like that.”

“As he explained it, he wanted to be able to back pedal and not have to look at his feet to know if he’s inbound and still behind the line and  he used to do it from the corners. It was so fitting that that was the shot that would force the game to overtime.”

“For us, we always say it was the greatest shot of all-time,” he said.

As a video coordinator for Riley, Spoelstra  used to do cuts of defensive breakdowns and pick-and-roll plays.

But one of the toughest works he had to do happened when Riley asked him a different type of output – a music video.

“It was about December and (Riley) said I want you to put together a music video tomorrow,” he said.

“I literally have no idea what he was talking about and he said to find some kind of soulful music and make sure it matches up with each dunk that there’s a highlight to the song.”

Spoelstra said he used to call Bob Salmi, who was Riley’s video coordinator back then, to understand what Riley’s asking for.

“He told me like a Hollywood-type feel so I scrambled and to this day, I can’t thank Bob Salmi enough. I pieced together something pretty horrible but I ended up going to TV stations from that point on to help them produced videos for me.”

Since then, Spoelstra kept his good relationship with Riley and the front office. Just last year, Spoelstra signed a four-year contract extension as head coach of a Heat squad bannered by veteran Jimmy Butler.

Before the league shutdown due to pandemic, Miami held the No. 4 spot with a 41-24 record in the Eastern Conference. – Rappler.com