Facebook Twitter Copy URL
Copied
In their first game back since the FIBA Asia Championship, Gilas Pilipinas showed they could still work together as a team, outlasting the PBA All-Stars

MANILA, Philippines –  In their first game back since the FIBA Asia Championship, Gilas Pilipinas showed they could still work together as a team.

The national men’s basketball squad was all business and in full control of the game right from the get go all the way until the end as they asserted their might in the paint with naturalized big man Marcus Douthit, and let it rain from beyond the arc with 9 three-pointers.

The nationals, indeed, executed their game plan as they got off to a good start with Jeff Chan burying a trey right off the gates. They later piled up on points to make it a 49-42 halftime advantage.

They never looked back after that, outscoring the All-Stars 33-22 in the third to push their opponents into a hole they could never claw out of.

“I’d like to extend my appreciation to coach Tim (Cone) and PBA All-Stars for preparing hard,” remarked Reyes. “You could see that they were very well prepared. They defended us well, they kept showing us different combinations, different looks. 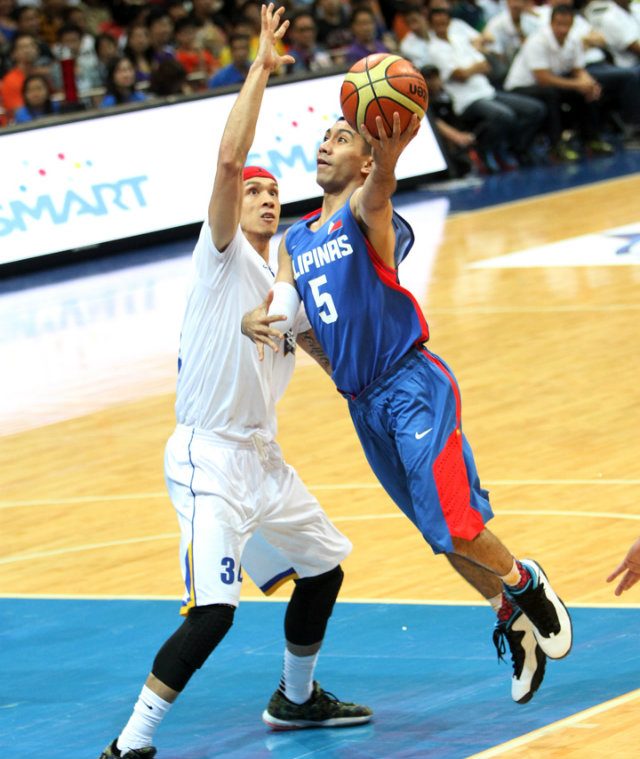 “You could see with their offense they were able to run some stuff that we’re going to see in international competitions. I think this game will definitely help us.”

On the part of All-Stars coach Tim Cone, the variations on offense, defense and line-up were all part of their goal for tonight.

“The idea coming in here was to challenge the Gilas team and I thought we did that,” he said. “We did everything, we played big line-ups, we played small line-up, we tried to run sets, we tried to run triangle. We threw the whole kitchen sink at them.

“But they responded well as expected. They are a team that’s intact and they know each other.”

"Ironically we had enough defense but didn't have enough offense. The idea was play defense then bahala na offense." pic.twitter.com/HVs7Chmmi7

The FIBA Asia silver medalists built their biggest lead during that searing third frame run on a Jayson Castro breakaway lay-up, 67-49, with 6:25 on the clock.

The All-Stars put up some resistance once again towards the end of the payoff period, cutting the deficit to 10, 100-90, on an Arwind Santos basket with 2:25 to play. But missed attempts ensued for the All-Stars after that, effectively securing the win for Gilas.

Even with the loss, the All-Stars, led by James Yap, Mark Barroca and Greg Slaughter, weren’t too shabby.

Despite what the final tally might say, the All-Stars gave Gilas a tough time executing their offensive sets. The defense locked in on Gilas whether on the perimeter or closer to the basket.

“Ironically we had enough defense, we just didn’t have enough offense,” noted Cone. “We went through some of the defensive schemes we wanted to do and I thought we executed it pretty well. At least we executed it with effort. The idea was play defense and bahala na (whatever) offense.”

The All-Stars made 8 treys with Marcio Lassiter leading the scoring with 12 points. Slaughter added 11, while PJ Simon had 9 markers. Gilas, on the other hand, tallied 28 assists, which Reyes says is a testament to the kind of team they are.

Chan tallied 17 points on 4-of-6 triples while Gary David had 15 markers.

David was named All-Star Most Valuable Player and won the P30,000 prize for it.

This is only the beginning for the World Cup-bound national team. They obviously still look rusty on the court despite the win and there is still plenty more they need to accomplish before they are ready to go on a showdown against the world’s best. But Reyes knows this one game alone is already a step in the right direction.

“It might be just one game but it means a lot to us and most especially to the fans to be able to see again.”

Even before the actual game, both squads already bathed in the spotlight with the traditional All-Star dance-off.

But just like last year, it’s still the PBA All-Stars who reigned supreme when the hip-shaking and confetti settled.

Wearing the well-known Jabbawockeez mask, Gilas, led by David, showed their quirky and relaxed personalities with shameless dance moves to a very entertained crowd. The highlight of their performance was June Mar Fajardo breaking out in dance and silent song to the film Frozen’s highly popular song “Let It Go.” Fajardo initiated that final dance as his teammates popped some confetti and joined the dancing themselves.

Their counterparts in the PBA All-Star selection, came out hiding cardboards underneath their shirts. They later revealed it to be letters that formed “GILAS PILIPINAS” with Maning Vilbar, the colorful character on the San Mig Super Coffee bench, carrying the final word, “PUSO.”

Devance and Santos led the dancing for the All-Stars, showing off some impressive dancing chops. Barroca was also a highlight of their performance with his brown curly wig as he sang to “I Love Rock ‘N Roll.”

Gilas was unable able to redeem themselves from last year’s dance-off loss, however, as the All-Stars took home the cash prize of P50,000.

The dance-off loss, Reyes said, was the only bad thing he could see from the game.