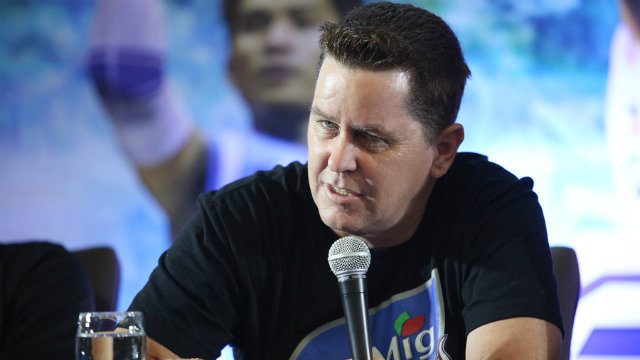 Facebook Twitter Copy URL
Copied
San Mig Coffee head coach Tim Cone coached against the Gilas team on Sunday night. While he doesn't believe they're the most talented squad ever assembled, he feels they're the best team the Philippines has seen in a long time

MANILA, Philippines – Having a collection of talented players in one team can make winning easier, but stringing together a unique group of dribblers to make the perfect team is an extraordinary circumstance.

That was the biggest difference on Sunday, April 6 during the All-Star battle between a PBA selection and Gilas Pilipinas.

Having the right pieces in the puzzle is the formula to having Gilas Pilipinas become the best basketball team ever assembled in recent memory, according to multi-titled PBA head coach Tim Cone, who called the shots for the PBA All-Star selection for this year.

“I don’t think it’s the most talented but it is the best team because it is well-constructed; Chot came in with the idea of how to run the team. He wanted the dribble-drive so he collected pieces he saw around the league. They play at a really high level together,” said Cone after their exhibition match where Gilas dominated, 101-93.

While Gilas does not boast a talent-rich squad or players who fill the stat sheets and cop and handful of individual distinctions, their success is traced to having the cagers who perfectly fit head coach Chot Reyes’ system. Cone, who has been in the PBA for more than two decades now, believes this team is not the most talented but it is the best.

Cone mentored the PBA selection but struggled against the more experienced and well-rounded national squad; he thinks Gilas mentor Chot Reyes purposely chose his set of guys from the beginning and it turned out to be the best squad put together.

“I think it is Chot’s intention from the beginning to not put the best players but put the best team together and he’s done that,” he said.

He added Reyes could have gone for more talented guys around the league, but instead chose a unique set of individuals who would be rolled into a system that runs like a well-oiled machine. And Reyes has done that impressively.

“There are many talented guys in the league but these are the guys he chose for his system and it is going to elevate the level of play.”

Nevertheless, Cone’s wards fulfilled their mission of giving Gilas Pilipinas everything they could handle. While it was an All-Star affair, the PBA selection pressured Gilas constantly on defense, ran European plays, and used different combinations on the floor in trying to give the nationals a run for their money.

“Our goal was to play as hard as we could and to be defensive-minded. We felt that would be the best test for Gilas and we achieved that.”

And the San Mig Coffee head coach knows the team will only get better with Chot Reyes at helm.

“He is a great developer of chemistry. He has a knack for that, a gift for that. Not every coach has that, honestly,” told Cone about Reyes.

“He will make this team better because they’ll connect more, have more defined roles, and have positive attitude. I think that is the next level for them.”

On the right track

Gilas Pilipinas were ruthless from the get-go, and finished with more assists (28-16), rebounds (50-46), and were way ahead on points off turnovers heading into the fourth period before the PBA group – composed of former national team members as well – would spark a run.

They led by as much as 18 points midway in the third quarter, and led for all but 2:40 minutes in the 48-minute encounter, proving just how deadly they could get despite not having a tune-up match since last year.

Five players finished in double-digit scoring for coach Chot Reyes, who believes having a year of experience proved to be the night’s biggest difference.

“This isn’t our first game together as a team so that was the biggest difference,” said the multi-awarded PBA head coach.

Last year, Gilas Pilipinas gave away 124 points in the Digos City, Davao Del Sur edition of the All-Star match. While they limited the PBA stars on Sunday, Reyes admits Cone pushed them to the limit. On the bright side, it was the perfect simulation for what they would be expecting in the FIBA World Cup on August.

“They prepared well for us; they we’re throwing different combinations and giving us different looks. They were able to run some stuff we will see in international competition,” he added.

“More than the final score, I was looking at how the players were reacting and executing. I am very happy with our 28 assists and that speaks volume of the kind of team we have.”

Former Gilas players Mark Barroca and Sonny Thoss themselves think the current roster can go a long way. Thoss muscled his way inside and did score on an array of post moves; he says he just got lucky, but more than that, he is glad to have given Gilas a helping hand.

“Any game is gonna help them. They know their chemistry and any opportunity for them to play is a chance to grow and develop. Everybody on our side pushed them and did not take them lightly,” shared Thoss, who was part of the Jones Cup-winning Gilas 2 squad in 2012.

“We tried to zone and create mismatches to help Gilas with their preparation. We also pressured on defense because we know their opponents will be even better defensively,” the Smart Gilas I point guard quipped.

Gilas Pilipinas surpassed expectations on Sunday with flying colors. They will resume with once-a-week practices before going to a tough grind on July in Wuhan, China for the FIBA Asia Cup.