Viloria: Manny needs to be Manny to beat Bradley 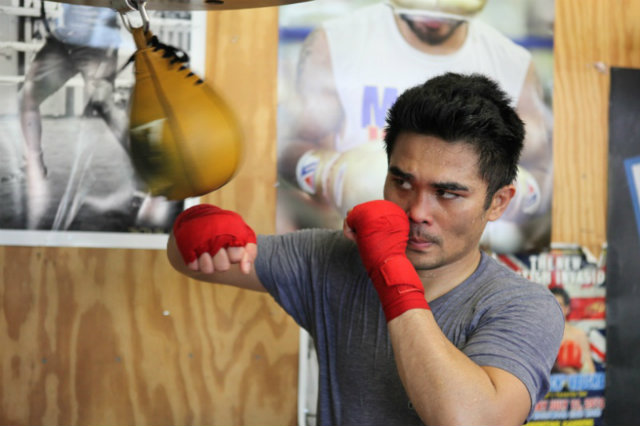 SINGAPORE – Former flyweight champion Brian “The Hawaiian Punch” Viloria thinks Manny Pacquiao should stick to what he does best, and that’s fight coming forward, when he takes on Timothy Bradley in their much awaited rematch at the MGM Grand Garden Arena in Las Vegas, Nevada on Saturday, April 12 (Sunday morning PH time).

“Given the fact that [Pacquiao] did win the last fight in my eyes, he just needs to be aggressive,” said Viloria, who knows a thing or two about being the initiator. “Manny doesn’t need to do anything different than being a little more aggressive,” he added.

Viloria however, doesn’t feel that Pacquiao should go in recklessly, given the way he lost to rival Juan Manuel Marquez in December of 2012. Pacquiao ran into a Marquez counter right hand, which effectively removed him from his senses.

“Pacquiao shouldn’t look for a knockout though,” said the man they call The Hawaiian Punch. “He should just go in there and fight his fight – fight a Manny Pacquiao fight.”

(RELATED: 3-on-3: Thoughts, predictions on Pacquiao vs Bradley II)

Oftentimes, fighters who carelessly chase a knockout end up on the wrong end of a punch they don’t see coming, much like the one that sent Pacquiao crashing face first onto the ring floor. But if he sticks to Freddie Roach’s gameplan, Viloria thinks Pacquiao should win quite handily.

Unless of course, Timothy Bradley has something to say about it. For Bradley to win, Viloria says boxing would be key.

“To be successful against Pacquiao, Bradley will have to box him the way Marquez did – with counterpunching. He needs to box Pacquiao,” said Viloria, a highly technical boxer with extensive knowledge of the sweet science, being a member of the 2000 US Olympic team that competed in Sydney.

“[Bradley] needs to be passive, but at the same time aggressive – boxing, but boxing effectively. Make Pacquiao miss, counterpunching,” said Viloria, who feels Bradley may have the skills to win on points, if he fights smart that is.

“But I really can’t see Bradley knocking Pacquiao out. I really don’t think he has that kind of power,” he added.

(IN PHOTOS: Pacquiao’s last day of running in LA)

Then again, no one thought Marquez had the type of one-punch knockout power he showed when he took Pacquiao out, so it’s not surprising fans, including Brian Viloria, think Pacquiao should be a little more cautious.

“[Bradley] can take a punch, he showed that in the Provodnikov fight. I can’t really question his heart. It’s going to come down to who’s going to establish their game plan more,” Viloria explained.

“It’s the quintessential boxer versus aggressor type of fight. Pacquiao needs to throw combinations and step out of the way. At the same time, Bradley needs to use Pacquiao’s momentum against him while boxing and counterpunching.” 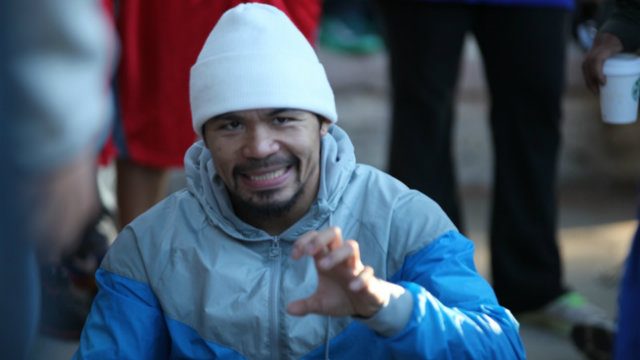 A student of the game first and foremost, and a Pacquiao fan second, Viloria thinks that this time, the judges will get the decision right.

“I see Manny winning this fight (again), in a decision,” he added. “Bradley will take good shots and get backed up from those shots. The judges will give it to Pacquiao due to aggression.”

Own road back to title

Viloria is home in Los Angeles with wife Erica eagerly awaiting the birth of their baby boy.

“Five weeks left,” Viloria said, in what he considers will be the biggest victory of his year.

Coming off a win over Juan Herrera of Puerto Rico in his last fight, Brian Viloria is slated to return to action this May, in a co-feature with Nonito Donaire who is headlining against WBA featherweight champion Simpiwe Vetyeka in Macau, China.

Viloria’s fight date is right about when the couple are expecting their first child. Viloria said that though he wants to compete in May, it could be a little too close for comfort.

“I told my manager (Gary Gittelsohn) that I would definitely love to be there for the fight, but I think it’s cutting it a little too close,” Viloria explained.

“I can’t say to my child: ‘I wasn’t there when you were born.’ I don’t think I can do that. I would really love to be with my wife during the delivery and be there for them,” he added.

Viloria had been on a tear since 2010, defeating the biggest names in his division and becoming the man to beat at 112 pounds until he ran into Juan Francisco Estrada a year ago. Viloria dropped his unified WBA and WBO flyweight titles to the Mexican by split decision but has since then returned to the ring for another run at becoming world champion. – Rappler.com