Pacquiao Watch: The way out of tax trouble

Apr 26, 2014 2:54 PM PHT
Edwin Espejo
Facebook Twitter Copy URL
Copied
Though the BIR has halted garnishments on Manny Pacquiao's accounts have ceased, he isn't out of the woods yet on his tax issues. Columnist Edwin Espejo looks at how he can put them to rest 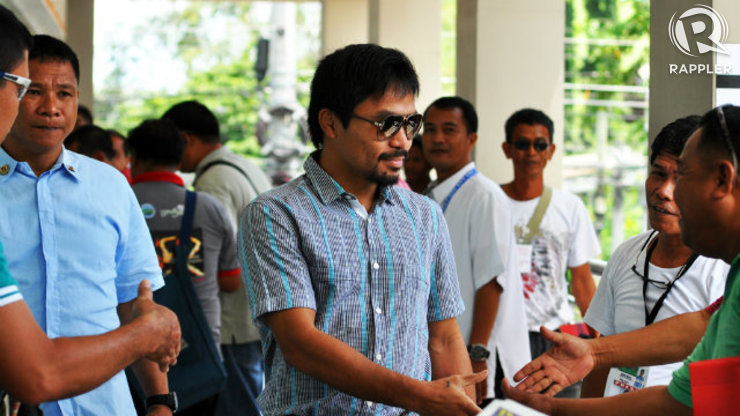 Despite meeting with President Benigno Aquino III on Monday, Rep. Manny Pacquiao the taxpayer is not yet off the hooks.

Yes, the Court of Tax Appeals stopped the garnishment of his accounts but it may have been an order to pave the way for a settlement. In lifting the BIR garnishment order on Pacquiao’s bank accounts, the court however also said the lone congressman from Sarangani will have to post a cash bond equivalent to his reported P3,298,514,894.35 total obligations or a surety bond that is 1 and 1/2 times his deficiencies.

The Court of Tax Appeals knew fully well that Pacquiao’s current net worth cannot cover up for the cash or surety bond that the eight-division world boxing champion was required to enable him to withdraw or deposit money from his known bank accounts.

But the order is one giant leap towards a compromise.

His lawyer Remigio Rojas already set the tone for a petition to reduce the bond which the court will likely grant given the controversy the case has generated. Both Pacquiao and the BIR obviously want a quick fix and an easy way out.

You see, his is one of the more celebrated tax cases in recent years. A sudden reprieve will have more ramifications, mostly on the political side, if Pacquiao walks away totally absolved of his tax obligations. It will also set a dangerous precedent as Pacquiao is known to be entertaining a possible presidential run in 2022.

Yet the government also knows very well that Pacquiao’s reservoir of goodwill is not about to dry up.  At least, not sooner than when the Aquino administration leaves office in 2016.

So expect some thawing and a settlement that will let everybody walk away with a smile if not a grin.

He was reported by ABS-CBN TV Patrol Socsksargen to have paid P161 million in income and other taxes before the Lenten break for the year past.

A large portion of what the BIR has levied Pacquiao came allegedly from his boxing purses and share in the pay-per-view buys in his lucrative fights during those years.

But the camp of Pacquiao claimed he should no longer be taxed for his income in the US which had been deducted of tax by the Internal Revenue Service.

The problem is his camp is yet to furnish the BIR a DFA-authenticated certification that he has paid taxes in the US for those fights in 2008 and 2009.

What is taking his camp so long to produce those documents, only they can tell.

The sooner Pacquiao does away with his BIR woes, the better it is both for him and the Aquino government.

A deal could erase and spare them all the embarrassments.

Methinks it will just be a matter of cooling off period before Pacquiao and the BIR come to terms. – Rappler.com