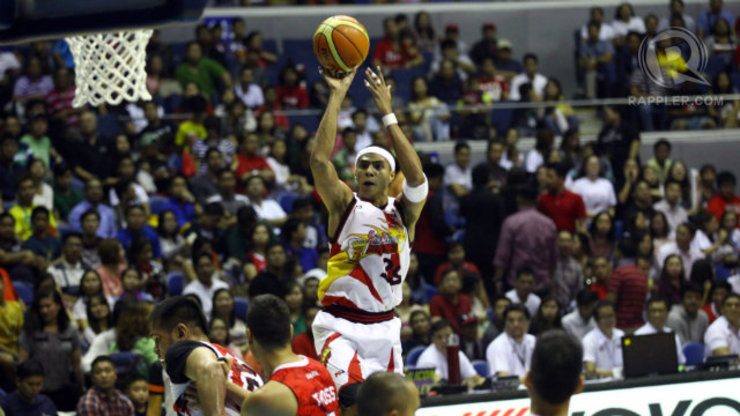 MANILA, Philippines (UPDATED) – Whether it’s the flagrant fouls, the technical fouls, the double fouls, the shoving matches, or the psychological games, what’s clear is that both the Alaska Aces and San Miguel Beermen won’t give in to intimidation in their best-of-7 2015 PBA Philippine Cup Finals series.

In game two on Friday, January 9, the Beermen had the last laugh by beating the Aces, 100-86, thanks to a fourth quarter explosion that let them tie the series at 1-1.

“Isa lang ang mananalo (only one could win), and this time we prevailed,” SMB head coach Leo Austria said after the game.

Arwind Santos finished with 22 points on 9-of-16 shooting and 4 rebounds, while Chris Lutz had his second consecutive impressing outing with 20 points, 10 rebounds, and 5 assists. June Mar Fajardo, after taking just 9 shots in game 1, took just 8 in game 2 but finished with 15 points and 12 rebounds before leaving the game in the fourth quarter due to an ailing back.

“I thought that, initially, when we took some cheap shots, we lost our focus. We need to be smarter than that,” Alaska head coach Alex Compton said following the match.

His star player, Calvin Abueva, finished with only 11 points of 3-of-10 shooting while also getting involved in a number of heated altercations, most of which with Santos, who was the better play on the floor on Friday.

“He’s the one that dictated the tempo of the game. He became physical. Talagang hinarap niya si Abueva (he really faced Abueva), and that’s what we want,” said Austria, whose club, if not for blowing a 22-point lead in game one, could have been up 2-0 by now.

“I know we won the first game, but I don’t feel it changed the fact that we are the underdogs,” said Compton, who later added: “we’re still facing Goliath.”

SMB only had a two-point lead entering the final quarter, but went on a quick 7-0 spurt to build a 9-point lead. After JVee Casio – who finished with 14 points – hit a jumper to break his team’s drought, San Miguel went on a 12-2 run to increase their advantage to 91-74, which was enough of a leeway to come away with the win.

The Aces shot 46% from the field but took just 8 free throws, while SMB made 48% of their shot attempts and went 20-of-25 from the free throw line. Rookie David Semerad went 4-of-4 from the foul line and finished with 10 points and 4 rebounds in 10:19 minutes.

Alaska was destroyed on the boards, 52-30, allowing the Beermen 19 second chance points while they put up just 8. After throwing away 26 turnovers in game 1, the Beermen committed multiple miscues again in game 2, tallying 23 turnovers.

Chris Ross was efficient for SMB, putting up 12 points on 4-of-4 shooting to go along with 5 assists. Alex Cabagnot recorded 7 points in 17:21 minutes of action.

Cyrus Baguio had 13 points while Sonny Thoss recorded 16, but had only 1 rebound. After his big night in game 1, Hontiveros was quiet with only 8 points on Friday.

Both teams were accurate on offense in the first quarter, combining for 60 points on 23-of-41 shooting and 9-of-14 shooting from 3-point range.

But the biggest theme of the game’s first 12 minutes was the physicality, as a total of three technical fouls and a flagrant-one foul was assessed to different players and Compton.

On multiple plays, Santos and Abueva baited each other into committing silly fouls, while other Beermen like Ronald Tubid and Semerad took turns dropping Abueva to the floor with rough plays.

The physicality from both sides regressed in the second quarter, but unfortunately for the Aces, so did their offense.

SMB increased their lead up to 8 at one point despite a fairly quiet first half for Fajardo – 6 points on 3-of-5 shooting – while Lutz and Santos (a combined 24 points in the first half) tilted momentum towards the Beermen’s side as they took advantage of empty offensive possessions from the Aces.

Before the end of the first half, Alaska went on a 7-2 run thanks to shots from Baguio and Thoss that cut SMB’s advantage to three, 51-48.

The physical play of the match reached a notch higher in the third quarter as Alaska took the lead. Following a jumper by Santos that cut the deficit to one, both he and Abueva were battling for a rebound that yielded a cut on the former PBA MVP’s forehead. 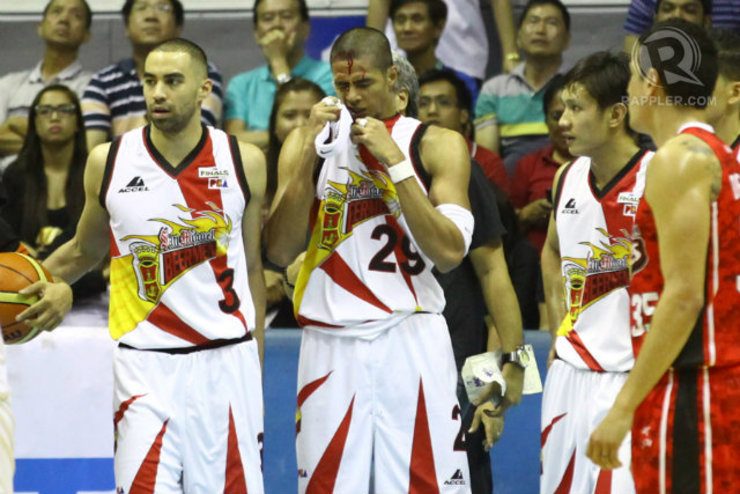 Santos was taken out of the game to remedy the gash, then moments later, Hontiveros and Semerad got involved in a skirmish that led to the benches of both teams running to the floor to separate the two.

“I’m supposed to control my emotions,” later said Hontiveros, who also mentioned that he should avoid such incidents since he’s already a veteran in the PBA, while Semerad is only a rookie.

A few minutes after, Vic Manuel was assessed with a flagrant-one foul for pushing Semerad down from the neck, leading to a three-minute exile on the bench.

(The flagrant foul on Manuel was the turning point of the game).