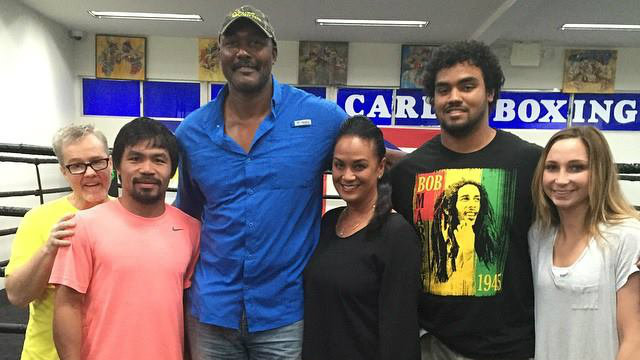 A photo posted to Pacquiao’s Instagram account showed the 6-foot-9 Malone and the 5-foot-7 Filipino standing side-by-side, along with Roach and the former NBA player’s family.

Thank you Karl Malone for visiting me today. God Bless you and your family.

“Thank you, Karl Malone, for visiting me today. God bless you and your family,” Pacquiao wrote.

Regarded as one of the best power forwards in NBA history, Malone spent his first 18 seasons with the Utah Jazz and formed a formidable duo with his teammate John Stockton that led the team to two finals appearances.

Malone, a two-time NBA MVP awardee, tallied 36,928 points in his 19-year professional career that placed him at second in the scoring leader list and also holds the record for most free throws attempted and made.

Pacquiao is a basketball enthusiast and serves as a playing-coach for the Kia Carnival in the PBA, Asia’s first professional basketball league.

The 36-year-old Pinoy boxer was also seen using basketball scrimmages as part of his training to condition his body. – Rappler.com