Mayweather would be devastated by a loss, says Foreman

Apr 24, 2015 3:26 AM PHT
Facebook Twitter Copy URL
Copied
Former heavyweight champion George Foreman is picking Pacquiao to defeat Mayweather on May 2, saying he think Mayweather would have to leave the country to recover from a loss 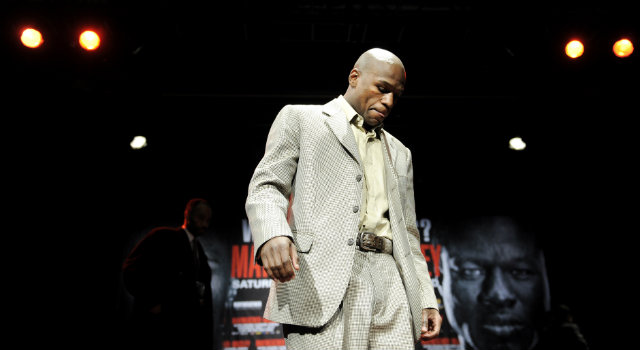 Foreman has plenty of experience in superfight history, having suffered his first career defeat in a mega-bout spectacular in Zaire to Muhammad Ali in the fabled 1974 “Rumble in the Jungle.”

And he sees a strong start for Pacquiao, a big rally by Mayweather but a decision for the Filipino icon, who is 57-5 with two drawn and 38 knockouts.

“I think Pacquiao to win six rounds, the seventh will be kind of even. Mayweather will come on in the last rounds but it will be too late. The fight will be won by a single round,” Foreman said.

“Mayweather starts off early looking for a rhythm, Pacquiao will pop him early on, he will tire and Mayweather will come on in the later rounds but he will lose.

“It’s going to be a fantastic, amazing boxing match. It will live up to all the hype, it really will.”

Foreman knows all-too well the impact on a fighter who goes into such a bout unbeaten and comes out a loser, a fate he predicts for Mayweather, 47-0 with 26 knockouts.

It took Foreman 15 months to climb back into the ring against another opponent after losing to Ali, his first defeat after 40 career wins.

“I’m the one guy who knows what it’s like to be undefeated going into a fight like that and to be knocked off that pedestal,” Foreman said.

It was 1991 before Foreman again fought for a world title and it was not until 1994, just over 20 years after losing to Ali, before Foreman reclaimed the title, defeating Michael Moorer to become, at 45, the oldest champion in heavyweight history.

“You lose your perspective on who you are as a human being,” Foreman said, saying that could be a reason why a rematch would not take place.

“This could devastate him (Mayweather) as a boxer, not as a man but as a boxer. He might have to go out in the country somewhere if he lost.”

Foreman, now 66, has an insight into what Pacquiao and Mayweather are going through and he stressed the solitude each fighter must face.

“This is probably, for Pacquiao and Mayweather, the most loneliest hours they have ever had in their lives,” Foreman said.

“They have a lot of people around to train with but there’s no one to talk this around with. You can only talk to yourself. There’s nowhere to go but inside yourself. It’s lonely.”

Foreman advised Mayweather to attack early and go for combinations and power punches rather than make defensive moves and counterpunch, waiting for great chances.

“Against Pacquiao, you have to throw hard shots and go for the finish two or three times,” Foreman said.

“He’s going to have to throw combinations and big punches. You’re not going to get a knockout but try early anyway to stay ahead on points.

“He can only use that counterpunching if somebody is attacking. Pacquaio uses his style and angles, he is hard to land on with a counterpunch. Mayweather is a defensive genius, but believe me, to win these rounds it’s going to take offense.”

Foreman was part of an HBO pre-fight special on which he joined Britain’s retired heavyweight legend Lennox Lewis and Bernard Hopkins, who broke Foreman’s record as boxing’s oldest major champion, to examine big fights ahead of what figures to be the richest bout in boxing history.

“Us old guys love the comparisons. It gives us a chance to live again,” Foreman said. “The comparisons are good although this is a great fight by itself.” – Rappler.com