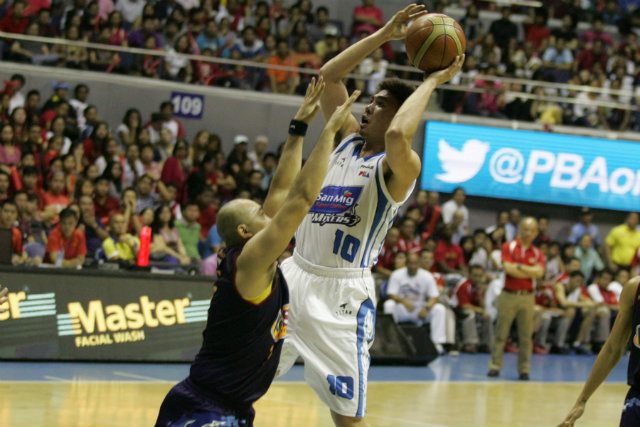 MANILA, Philippines – Injured big man Ian Sangalang will begin the next phase of his long comeback journey in July when he returns to practice with the Star Hotshots for the first time since tearing the anterior cruciate ligament (ACL) in his right knee.

Sangalang, the second overall pick in the 2013 PBA Draft, suffered the injury after a bad landing during the Hotshots’ season-opening game against Alaska last October.

“Nakaka-jump na ako (I can jump already), single land, left and right,” the beaming 23-year old shared an update on his recovery to Rappler. “Confident naman ako kasi lahat ng kailangan ko gawin sa court, nagawa ko na sa rehab ko (I’m confident right now because all the stuff I need to do on the court, I can already do in rehab).”

The former San Sebastian College standout said he is slated to wrap up his rehabilitation this month and aims to train again by the first or second week of July, in what will be a long offseason for him to prepare for the 2016 PBA season which starts around October.

(Right now I don’t have any more restrictions, so I can do pretty much everything. Unlike before there was a lot I was not allowed to do.)

Already a 3-time PBA champion in just his rookie season as the Star (then the San Mig Super Coffee Mixers) won a rare Grand Slam, Sangalang quickly ascended into one of coach Tim Cone’s vital cogs for his triangle offense.

Sangalang averaged 7.4 points, 5 rebounds and 1 assist in close to 20 minutes per ballgame through his first year as he provided depth, versatility and, most important of all, fresh young legs to the Hotshots’ frontcourt.

“There is a reason why we’re not doing as well this year than we did last year and that’s the loss of Ian,” Cone told Rappler.

The Hotshots have largely struggled since their 4-peat dating back to the 2013 season. In this season’s Philippine Cup, they finished in 7th place and was likewise unable to defend their Commissioner’s Cup title, bowing out in the semis.

Sangalang’s loss is greatly felt, especially now that the Star is making another run in the 2015 Governors’ Cup playoffs and trying to overcome a twice-to-beat Globalport.

“He’s too valuable for us. He’s our future. He’s really important to what we do over the next 5 to 8 years,” Cone explained.

But more than the team missing Sangalang, Cone expressed concern over what Sangalang is missing in experience compared to his draft batchmates in first overall pick Greg Slaughter and third overall pick Raymond Almazan.

“I just feel a little sayang (bad) for him because you look at how much Almazan has progressed and Greg has progressed, now Ian has lost almost a whole year.”

On the other hand, the upside according to Cone is “he has less mileage on his legs and he’ll come back stronger.”

With serious knee injuries like a torn ACL, athletes often find the challenge of regaining one’s high level of play is more a test of mental than physical strength.

Overcoming the fear of re-injuring oneself after fully recovering physically is the acid test to a player’s resolve. It is a test that Sangalang can pass with flying colors, Cone confidently said.

“He’s not a guy who lacks confidence. He has deep confidence inside himself. He’s a winner. He’s won everywhere he’s gone and he’s gonna come back. It’s really about finding his timing and we’re gonna be patient with him,” the multi-titled coach explained.

“Ang kalaban mo lang naman diyan yung mental aspect, yung takot mo,” admitted Sangalang, who has been lifting weights the past 3 months in an attempt to stay in shape. “Confident na ako pag balik ko.” (Your real challenge is the mental aspect, your fear. But I will be confident once I get back.) – Rappler.com