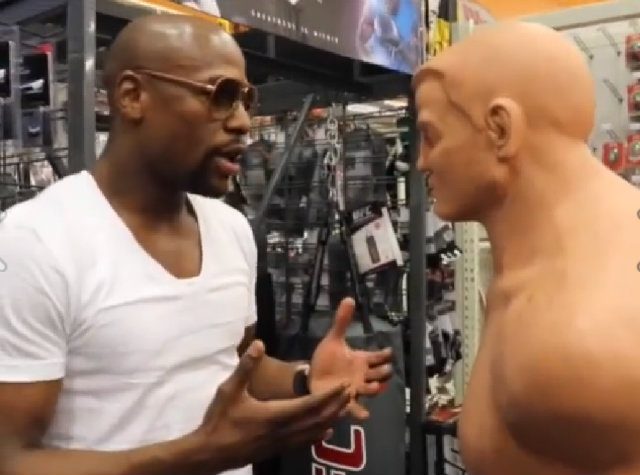 Facebook Twitter Copy URL
Copied
Mayweather confronts a rubber dummy about Pacquiao's claims that he deserved the victory in their fight earlier this year.

MANILA, Philippines – Floyd Mayweather Jr is adding some insult to injury after his victory over Manny Pacquiao.

The 5-division boxing champion posted a video on Wednesday, July 1 of himself at a sporting goods store where he pretends that a punching dummy is the Filipino boxer.

I love having fun, joking and living life #SenseOfHumor

“You’re out here telling people that I didn’t win fair and square, that this little arm is messed up. Is that right? Talk to me,” Mayweather said, before letting loose with some open hand palms to the rubber dummy’s face.

Pacquiao (57-6-2, 38 KOs) told reporters upon his arrival back in the Philippines: “I scored it and I believe I won by two points against Mayweather. But we have to accept the decision.”

Mayweather (48-0, 26 knockouts), is set to fight September 12 at the MGM Grand in Las Vegas, with opponents Andre Berto, Karim Mayfield and Amir Khan being floated around for the co-starring role.

Pacquiao, who blamed a torn right rotator cuff for his docile performance in the May 2 super-fight that Mayweather won by unanimous decision, had a cast on his arm for three months following surgery but has already had it removed. He’s set to travel to the United States for follow-up consultation on his arm with surgeon Dr. Neal ElAttrache on July 4, Pacquiao’s promoter Bob Arum tells ESPN.

No date has been given for Pacquiao’s return to the ring, though a return in 2016 has been ruled out. – Rappler.com