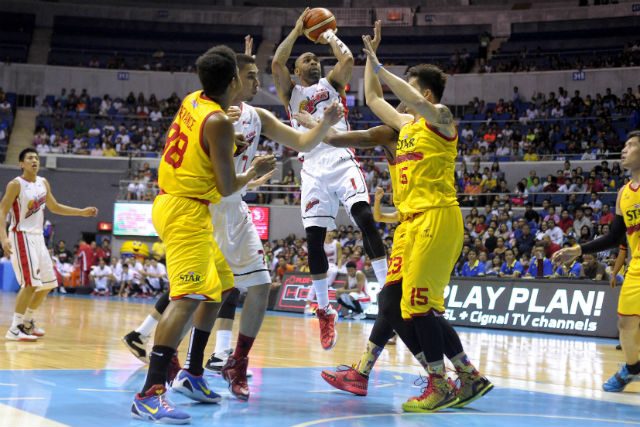 MANILA, Philippines (UPDATED) – The Alaska Aces are bound for their second PBA Finals appearance this season after taking care of the Star Hotshots in Game 3 of their semifinal series, 82-77, on Sunday, July 5, at the Smart Araneta Coliseum.

Trailing by 3 with under 3 minutes to go, the Aces turned to their import Romeo Travis who nailed two huge jumpers to re-take the lead for his team.

After getting a consecutive defensive stops, the Aces then leaned on Vic Manuel to deliver the dagger jumper that propels the Aces to the next round of the playoffs and puts an end to the season of the Hotshots, who entered this conference as defending champions.

Travis finished with 19 points, 10 rebounds, and 7 assists, while Manuel came up with 14 points and 4 boards. Rome Dela Rosa – who was named the best player of the game – and Cyrus Baguio each put up 11 points.

The Hotshots’ PBA season ended without them attaining a championship after they won 4 straight from the 2013 Governors’ Cup until the 2014 Governors’ Cup. The team was led by the 20 points of James Yap in the loss, while import Marqus Blakely tallied 15 points, 7 rebounds, 6 assists, 4 steals, and 4 blocks.

“When we talked about coming into this game, [we knew] there was going to be adversity,” Alaska head coach Alex Compton said after the win. “After Game 1, I talked about they’re not our kuyas (big brothers), but that never takes away the fact that we have tremendous respect for them.”

The Hotshots went with a bigger line-up that had Yap as their smallest guy on the floor and raced off to a quick 23-16 lead after one quarter.

“They caught us off-guard with that, completely,” Compton said.

Star’s lead extended to 46-37 at the half but the Aces quickly erased it to start the third period. The game went down the wire, with the Hotshots holding on to a 77-74 lead with 2:56 remaining in the contest.

Over the next few possessions, Travis hit a mid-range jumper, rebounded a miss by Yap, and then hit a 3-pointer in transition to give the Aces a 79-77 edge with 2 minutes remaining.

“He showed why he’s just a fantastic import,” Compton said about Travis. “He nailed two huge threes. Just all heart, all heart. Got some monster rebounds, a big block in the end. He just made some huge plays late that really helped us get back to the finals.”

“Thank God it went in,” Travis said about his 3-pointer that provided the final lead change of the contest.

The Hotshots had a few opportunities to re-take the lead, but Blakely missed an open 3-pointer and an attempt in the post, followed by a miss by Yap from downtown.

With 30 seconds remaining, Romeo found an open Manuel who hit a mid-range jumper and sealed the win.

“I love [that] I get to coach my guys. They adjusted, they played as hard as they could,” said Compton, whose team limited Star to 31 points in the final two quarters.

“It’s not like we were an offensive juggernaut against them, but if we can hold a great team to 31 points in a half – especially the second half – you give yourselves a chance,” he said.

The win delivered Alaska their 28th PBA Finals appearance. They will aim to obtain their 15th franchise championship as they go up against either the Rain or Shine Elasto Painters or San Miguel Beermen in this conference’s finals that’s scheduled to open next week.

The Aces fell to the Beermen in 7 games in the Philippine Cup finals.