Addressing malnutrition, one meal at a time

Jul 10, 2016 12:49 PM PHT
Millie Kilayko
Facebook Twitter Copy URL
Copied
I became obsessed with a single dream: to bring Mingo to the periphery of Bukidnon, to make it available to hungry little stomachs in its mountains 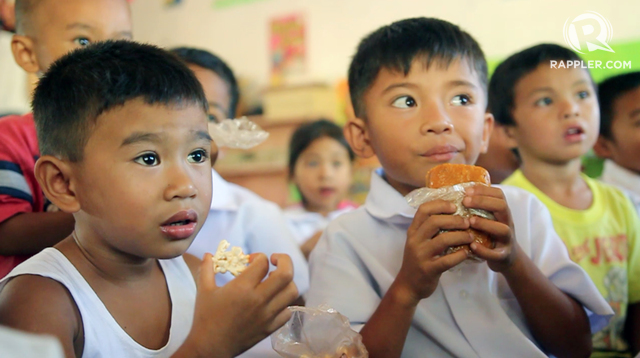 A November 29, 2015 article in Rappler triggered our non-profit foundation’s journey to the mountains half a year later.

It was a story written by Fritzie Rodriguez, on the children of Bukidnon who survived on nothing but cassava. At the time I read it, our 5-year- old Negrense Volunteers for Change Foundation Incorporated (NVC), of which I am a member, had already provided about 5 million Mingo Meals in 20 provinces.

Mingo is an instant powdered complementary food made of rice, mongo and moringa (malunggay) designed for infants and toddlers. In many cases, a meal program had also been designed for young children in school.  After Super Typhoon Yolanda (Haiyan) struck in 2013, its instant qualities made it a convenient emergency food even for adults.

Tossing and turning on my bed until the morning, I became obsessed with a single dream: to bring Mingo to the periphery of Bukidnon, to fill hungry little stomachs in its mountains.

Two things especially inspired and moved me to pursue the dream: one was Cardinal Chito Tagle’s promise to Pope Francis during his January 2015 visit to the Philippines, that the Filipino people would accompany him to the periphery. The second was a speech I heard a month earlier, of then candidate Leni Robredo’s passion for the “laylayan ng lipunan (margins of society)” for whom much had to be done, which inspired me immensely.

In my heart, Bukidnon would be NVC’s 21st province, and it had to be in the periphery of Bukidnon.

And so we began our search. Our foundation’s policy is that we implement programs only where we can find a good ground partner. The search was not easy. There were several referrals, and I would try to talk to each one, but somehow, there were as many misses as there were hits.

Finally, I was able to make a phone call to Sr Irene, whose order of Assumption nuns operates Xavier High School in Kibangay, Lantapan, Bukidnon. Shortly after that, we were able to send one field officer on a search mission.

During that trip, she was introduced to Fr Conrado (Bom) Casas and his assistant, Jay-R Yabo, who had been instrumental in pioneering development into the tribal community, while respecting their cultural heritage. When our field officer, Alyne Batano, returned home, we knew we had found our periphery.

Six months later, almost to the date, together with 3 other volunteers and 3 NVC staff, we climbed the slopes of Mount Kitanglad to meet the people of the Tala-andig Tribe.

Of course, the uphill trip to reach them was not easy. We attempted to walk the whole way, except for one volunteer who feared that the vibrations of the habal-habal would be detrimental to her vulnerable knees which had undergone surgery. We found it faster (not necessarily safer) to ride 3 quarters of the way, over sharp rocks and steep slopes, on the habal-habal.

As a gesture of friendship, we brought with us one round of Mingo Meals for the kids to test. We also brought a set of 3 simple farm tools which the community had been hoping (but could never afford) to own.

We were there for less than a day. Within the short span of time, so many things happened to me. I found children who could smile despite their hunger. I met men and women who, poor as they were, did not beg. I learned about the stories of selfless teachers who would walk up and down the hills daily for a fraction of what their colleagues receive as take-home pay.

There, up in the mountains, driven only by a single online Rappler article I read close to midnight several months back, I found the face of Jesus in every person I met.

All 7 of us rolled down the hills as different persons with different hearts. And back in Bacolod where we started off, we began to find a way we could craft, together with the tribe people, a holistic program for 9 sitios that they populate. One sitio at a time.

As for the children, we knew that this was something that could not wait. We just needed to find a way to get all the 3,000 children of the tribe to have access to Mingo Meals daily, for at least a few years while their parents are aided to find a way to provide more for their families.

We all know how malnutrition causes stunting among children. It affects not just physical, but emotional, intellectual and social growth of a child as well. We all know how the negative effects of malnutrition are irreversible even with improved nutrition.  We also saw how older children, also with hungry stomachs, looked with longing as Mingo Meals began to be served to infants and toddlers. Thus, we knew that we had to find a way to provide them all with daily Mingo Meals.

One big dream. One Mingo Meal at a time. As of this writing, close to 200 daily meals for 6 months are answered for, and have been brought up to the hills, carried by 4 horses and one cow.

Whenever I think of about 2,800 more daily Mingo Meals we need to provide, I do not fear. I just remember that night in November when I read the Rappler article, and how it seemed, then, like a mind-boggling task to find a way for NVC Foundation to be involved in a community up in the hills of Bukidnon.

And how, when we got there, 6 months later, we found a teacher of the tribe, wearing a T-shirt that said “NOTHING IS IMPOSSIBLE.” – Rappler.com

The author is the President of Negrense Volunteers for Change Foundation Inc (NVC), which, together with a few other province mates, she founded in August 2010. At the time of its inception, the founders envisioned a small community-based organization providing assistance around them by effective positive change in personal ways.  Instead, in 6 years, NVC’s projects have spanned 20 provinces, provided 4,789 motorized fishing boats to fishermen who need them, built 197 classrooms, provided tools for livelihood to 277 individuals, and served 5,450,854 Mingo Meals. She has spent most of her adult life in social development related projects and has been recognized with a TOWNS Award (The Outstanding Women in Nation’s Service) for her socio-civic involvement.