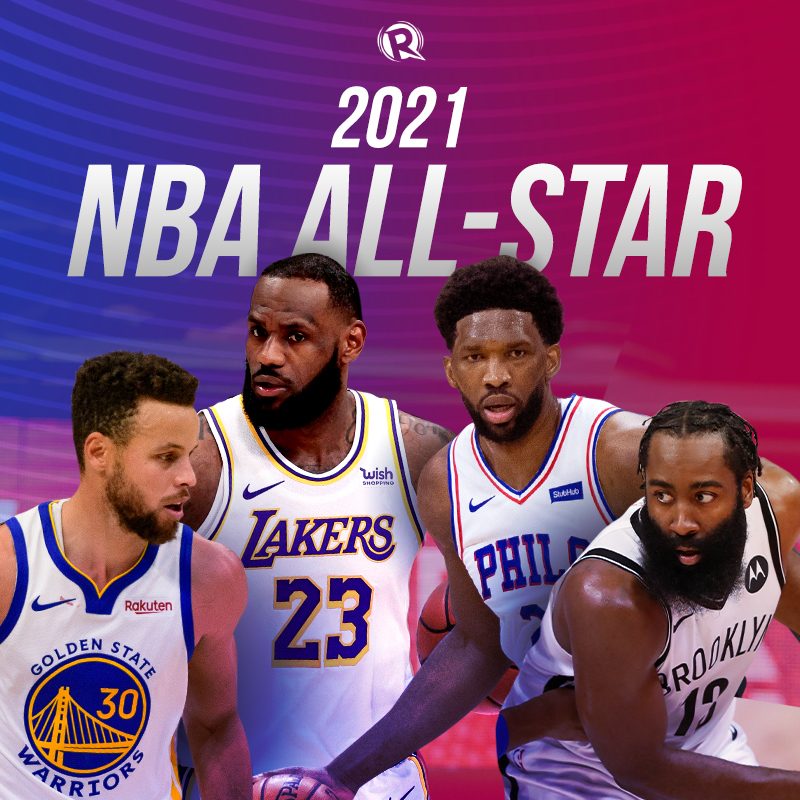 STAR-STUDDED. LeBron James and Steph Curry team up for Team LeBron, while Joel Embiid and James Harden link up for Team Durant.

The best and most prominent NBA players take center stage in the 2021 All-Star festivities to be staged in Atlanta, Georgia on Sunday, March 7 (Monday, March 8, Manila time).

Unlike past editions, all All-Star events will be played on the same day at the State Farm Arena due to the ongoing coronavirus pandemic.

Giannis Antetokounmpo dropped a game-high 35 points and never missed a shot to lead Team LeBron to a dominant 170-150 win over Team Durant in the 2021 NBA All-Star Game.

Antetokounmpo, who clinched the All-Star MVP award, shot a perfect 16-of-16 clip from the field and added 7 rebounds and 3 assists as Team LeBron won for the fourth consecutive year.

Damian Lillard also shone in the 20-point romp with 32 points, wrapping up the game with 3 straight three-pointers, the last of which he drained from near the half court line.

Just like last season, the All-Star Game had a target score this year – the cumulative score of the leading team through 3 quarters plus 24 points, which pays homage to late NBA icon Kobe Bryant.

With Team Lebron leading Team Durant, 146-125, after the first 3 quarters, the target score was set at 170 points.

Steph Curry finished with 28 points for Team LeBron after hitting half of his 16 three-point attempts, while Chris Paul had 6 points, 16 assists, and 8 rebounds, and 3 steals.

Three in a row.

Team LeBron imposed its will on Team Durant for the third straight quarter as it seized a huge 146-125 lead going into the final frame of the 2021 NBA All-Star Game.

With Giannis Antetokounmpo remaining perfect from the floor with 35 points on a 16-of-16 shooting, Team LeBron won the 3rd quarter, 46-45.

Following the format of the All-Star Game last year, the 4th quarter will be untimed, with the two teams racing to reach the target score of 170 points.

The target score is the cumulative score of the leading team through the first 3 quarters plus 24 points, which is a nod to late NBA great Kobe Bryant.

Anfernee Simons became the first player from the Portland Trail Blazers to win the NBA Slam Dunk Contest after narrowly beating rookie Obi Toppin of the New York Knicks in the final.

Simons earned the nod of 3 of the 5 judges with his blow-a-kiss dunk.

Off the bounce, Simons got his head above the rim and tried to kiss it before he threw down the slam, with former Dunk Contest champions Dominique Wilkins, Jason Richardson, and Dee Brown voting for him.

Josh Smith and Spud Webb, meanwhile, voted for Toppin, who finished with a between-the-legs dunk after taking off from near the free throw line.

The Dunk Contest followed a different format for the final this year, with the judges choosing the dunk they prefer instead of giving a score.

Indiana Pacers rookie Cassius Stanley also participated in the event but failed to reach the final after compiling just 81 points with his two dunks in the first round.

Simons ended the first round with 95 points, while Toppin had 94 points.

Team LeBron piles up 100 points at halftime vs Team Durant

Team LeBron piled up a whopping 100 points against Team Durant to build a commanding 20-point halftime lead in the 2021 NBA All-Star Game.

Giannis Antetokounmpo shot a perfect 11-of-11 and finished the first half with 24 points as Team LeBron won the 2nd quarter, 60-41.

Stephen Curry backstopped Antetokounmpo with 22 points on an efficient 6-of-8 clip from three-point distance, while Damian Lillard added 16 points for Team LeBron.

Team LeBron, who also won the 1st quarter, added another $150,000 as donation for the Thurgood Marshall College Fund.

Kyrie Irving topscored for Team Durant at halftime with 15 points.

Curry buried a barrage of impressive three-pointers in the opening salvo, one that had him turning his back from the rim even before the shot fell and the other that saw him drain from the logo.

Emotional time for LeBron to talk about Kobe

LeBron James was emotional when asked about his late friend and NBA icon Kobe Bryant.

Declining to answer a query about the memories he and the late great shared during the NBA All-Star festivities, James admitted it is a tough topic for him and his team at this point.

“I would like to stay away from the Kobe question. Today is just too emotional,” James told Rappler.

“Too emotional for our franchise and things of that nature. Obviously, he continues to live on and every other victim that was on that tragic day. My heart is with Kobe and Gigi and the family.”

“But I’d like to stay away from that one.”

The All-Star MVP is now named after Bryant, who won it 4 different times.

James has won it thrice, most recently in 2018, and will have the chance to tie Bryant and fellow record-holder Bob Pettit. Curry missed his first 4 shots in the finals before he heated up late to finish with 28 points, a point ahead of Conley, as he clinched his second Three-Point Contest crown and first since 2015.

A replacement in the event for injured Phoenix Suns standout Devin Booker, Conley surprised fans as he put himself in consideration for the title after firing 27 points in the finals.

Conley made all but one from his money ball rack and did not miss from his last rack on the left corner.

But Curry, who shot last in the finals, sizzled in his last two racks by drilling in 4 shots from his money ball rack and burying the game-winning money ball from his final rack on the right corner.

Jayson Tatum of the Boston Celtics also reached the finals but finished with just 17 points after putting up 25 points in the elimination round.

Curry led all participants in the elimination round with 31 points, while Conley chalked up 28 points.

Jazz star Donovan Mitchell and Chicago Bulls ace Zach Lavine did not make the cut despite tallying 22 points apiece, while Celtics’ forward Jaylen Brown had 17 points in the eliminations.

Brooklyn Nets All-Star James Harden is hopeful the 2021 NBA All-Star Game will be as competitive as last year’s thrilling edition.

That matchup, captained by teams of MVPs LeBron and Giannis Antetokounmpo, went down to the wire following a new format where the winning team had to reach a certain point total rather than playing with a traditional game clock.

Harden, who was part of James’ winning team thanks to clutch Anthony Davis free throws, scored 11 points in the 157-155 victory.

This year, he is part of Team Durant.

“Hopefully the game can be as close and competitive as it was last year,” Harden told Rappler.

“That was a special game, it was great to be a part of it. So hopefully we can come close, if not match, come close to the excitement that the fans had.”

The runner-up last season, Sabonis finally clinched the Skills Challenge title after draining his fourth three-point attempt in the finals, with Vucevic misfiring in the last part of the contest.

Sabonis became the third straight non-guard to win the event after Jayson Tatum (2019) and Bam Adebayo (2020).

Dallas Mavericks’ Luka Doncic and Phoenix Suns’ Chris Paul received a first-round bye, but they were eliminated by Sabonis and Vucevic, respectively, in the second round.