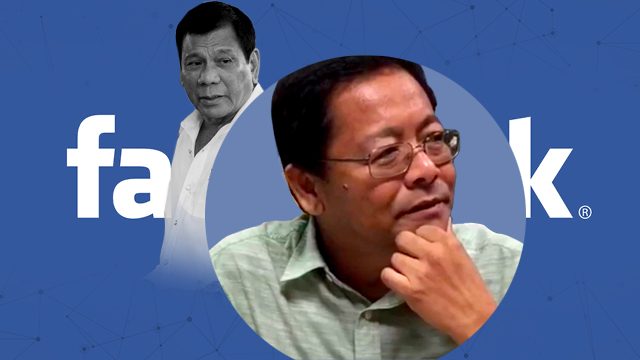 “[The pages] frequently posted about local and political news, including topics like the upcoming elections, candidate updates and views, alleged misconduct of political opponents, and controversial events that were purported to occur during previous administrations. Although the people behind this activity attempted to conceal their identities, our investigation found that this activity was linked to a network organized by Nic Gabunada,” Facebook said in a blog post.

The pages are influential, with 3.6 million users following at least one of the pages. While Facebook says the network was helmed by Gabunada, and that the pages pushed political messaging, they call the network “a non-government actor,” saying they don’t have anything concrete linking the Gabunada-run network to the government.

Gabunada said he was surprised with the takedown, and called the move “unfortunate,” in a phone interview with ABS-CBN. He said he was just among the people who share content and invited to join certain groups, and also said he plans to appeal the takedowns.

The Gabunada takedown follows similar Facebook action in January when the company took down Twinmark Enterprises for similar violations on Facebook’s policies on what it calls coordinated inauthentic behavior.

Gleicher notes that in the case of the Gabunada network, they noticed that the fake accounts operated more prominently in Facebook groups, misleading people to believe that they were interacting with real people with real political beliefs, when in fact they were part of social media campaign designed to influence and manipulate. Gleicher adds that in the Twinmark case, traditional pages were utilized more as opposed to Facebook groups.

Gleicher, as the company has always emphasized in the past, says that when looking for violations against their policy on coordinated inauthentic behavior, it’s the behavior they’re looking for and not the actual content being pushed. It’s the fact that fake pages were created to appear as real that triggered the takedown, and not the messaging or the political content being pushed by the pages, he said.

“[The pages] were designed to look independent, but they were coordinated. They post about political news: pro-content about their candidates, while some attack the opponents of those political candidates. They conceal their identity,” said Gleicher.

One of the tricks used by the network used include combining authentic and inauthentic accounts.

The pages also made use of Facebook ads, spending a total of about $59,000, with the first ad appearing in January 2014, and the last, just this March 2019. The ads were paid for in Philippine peso, Saudi riyal and US dollars.

Gleicher also said they will be working with policy makers after the takedown. A third-party report about the Gabunada network is also forthcoming from a US-based company, which Gleicher says should come out soon after their own report. – Rappler.com