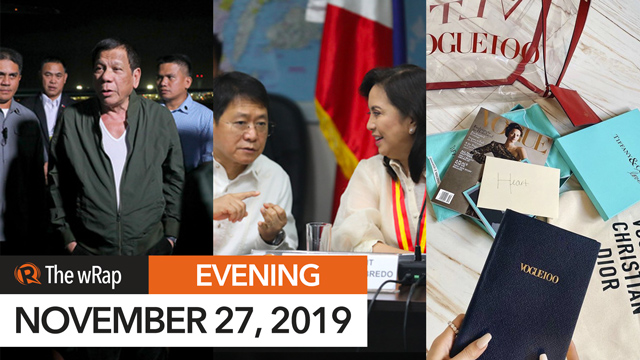 President Rodrigo Duterte is dismayed about the many mishaps plaguing the 2019 Southeast Asian Games. He wants a probe into why these things happened.

Interior undersecretary Jonathan Malaya says Vice President Leni Robredo did not get any confidential information from them during her time as co-chair of the Inter-Agency Committee on Anti-Illegal Drugs or ICAD.

Opposition Senator Risa Hontiveros says Tuesday, November 26, she asked the Senate to conduct an inquiry into the potential threat of China shutting off the country’s electricity supply.

The Department of Foreign Affairs or DFA announce the passport appointment rescheduling feature on its online appointment system is ‘temporarily unavailable’ due to a systems upgrade.

Celebrity Heart Evangelista is selected to be part of the Vogue 100, cementing her status as a global fashion icon. – Rappler.com