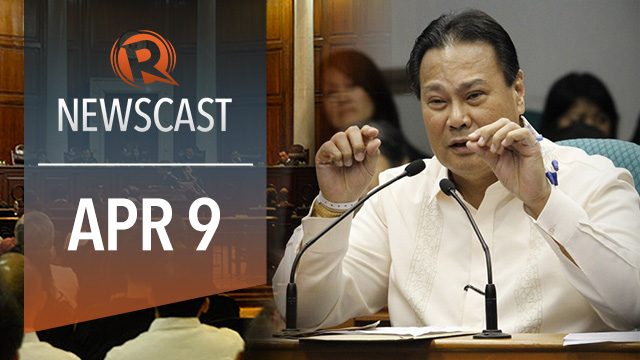 Dismissed Chief Justice Renato Corona abandons his claim for retirement pay days before the Supreme Court was scheduled to decide on it.
In a letter to the SC en banc dated Monday, Corona said he is withdrawing his earlier request to be granted retirement benefits.
Corona previously argued his impeachment does not prevent him from claiming retirement benefits.
He was dismissed in 2012, after the Senate found him guilty of violating the Constitution for undeclared wealth.
Lawyers estimated his retirement pay would amount to a lump sum of P20 million.
The former magistrate currently faces perjury and tax evasion charges.

President Benigno Aquino pays tribute to the country’s war veterans and soldiers stationed at disputed Ayungin shoal to mark April 9, Day of Valor.
It is also the 72nd anniversary of the fall of Bataan.
Aquino says his administration expanded benefits for war veterans.
He also assures soldiers in active service, the government is allocating P36 billion for the modernization of the Armed Forces.
The President also praises 7 Marines stationed for 5 months at the grounded ship in Ayungin Shoal, which China also claims.
Aquino says the soldiers endured nearly zero communication with their families and almost no fresh supplies.
He is referring to the constant harassment of Philippine vessels by Chinese coast guard ships bringing supplies to troops in the South China Sea or West Philippine Sea.

STORY 4: ‘BREAKING THE SILENCE’: THE TRUTH ABOUT ABORTION

The ruling on the RH law is a victory for advocates, who say it’s time issues on women’s health are addressed.
Church groups have repeatedly criticized the law, saying it promotes abortion.
But pro-RH Health Secretary Enrique Ona says that to stop abortion, women need to have accurate information to deal with high-risk pregnancies.
A theatrical presentation brings the true stories of Filipina women and the impact of abortion on their lives.
The exclusive event gathered local and international delegates of the Asian Pacific Conference on Sexual Health and Reproduction.
G Tongi reports.

Breaking The Silence is a collection of  monologues and true stories about abortion.
Its aim: to break the silence and remove the stigma on a taboo topic.
These Filipino women openly share their experience of going through the difficult decision of terminating a pregnancy.

G Tongi: Let’s start with one simple incontrovertible fact. Abortion is very common in the Philippines.
Pinky Amador: It’s a tragically simple cycle. Abortion laws lead to stigmatization, stigmatization leads to unsafe abortions. Unsafe abortions lead to blood and pain and sickness.
Jenny Jamora: Women are suffering and dying all around us. And yet we have done nothing. Afraid to be judged. Afraid to act. Afraid even to speak.

DR. JUNICE MELGAR, LIKHAAN CO-FOUNDER: It is a very historic occasion, for the women… who are completely denied information and services on abortion.
It is important because women are dying.
Families are losing  their mothers… it should not be happening to half of the population of the Philippines!

A Guttmacher Institute study in 2008 says around 1,000 maternal deaths in the Philippines were caused by abortion complications.
Nearly one quarter of the 2,039 hospitals in the Philippines cited abortion complications as one of the top ten admissions of patients.
Red Tani of the Filipino Freethinkers says “Breaking The Silence” does not advocate legalizing abortion.

RED TANI, FILIPINO FREETHINKERS PRESIDENT: A lot of women are affected by this issue and not only women but  families. A lot of them have died because of induced abortions. Even before legalization, we should start by talking about these issues.
We shouldn’t rely on authority and tradition to dictate to us  what we should believe, or how we should act. We live in a scientific and democratic time.

CARLOS CELDRAN, REPRODUCTIVE HEALTH ADVOCATE: If we don’t talk about it, doesn’t mean that it’s gonna go away! Ignorance equals death! This thing is a specter hanging over our head and 11 mothers a day as you know die in this country because they have no  access to reproductive health or reproductive health options. So education is the first key to empowerment.
You empower the mother, you empower the family and you will empower society.

KATHY MULVILLE, WGNRR DIRECTOR: We know that stats worldwide are 1 in 3 women have abortions! Every single  woman in the Philippines, I deny any woman to tell me that she does not know a mother, a sister and auntie, a neighbor who hasn’t had to have an abortion. Therefore it touches all our lives and how can something that touches  everybody’s lives be the one thing that’s not spoken about? We have to  change the situation!

STORY 5: OSCAR PISTORIUS TO RETURN TO STAND AFTER BREAKDOWN

On the third day of Oscar Pistorius’ murder trial, prosecutors grill the athlete accused of intentionally killing his girlfriend Reeva Steenkamp last year.
Pistorius admitted to shooting Steenkamp, but claims he thought she was an intruder and only fired at her accidentally.
Prosecutor Gerrie Nel cross-examines the athlete, telling him,
“You made a mistake? You shot and killed her. Say it — ‘I shot and killed Reeva Steenkamp.’”
The South African athlete broke down in tears after prosecutors abruptly showed a graphic picture of Steenkamp’s head.
Pistorius earlier testified about the events of the night Steenkamp died, recounting how her blood ran over him as he picked her up.

Japan kills 251 minke whales during the 2014 Antarctic hunt, in what is expected to be the last one after an international court ruling.
Japan’s Fisheries Agency says the number of whales caught is double last year’s tally of 103, but smaller than the target of 935.
Japan is a signatory to the International Whaling Commission, which bans commercial hunting, but it insists the operation was research.
Last week, the United Nations’ International Court of Justice ruled the program was a commercial hunt disguised as science.

STORY 7: THE wRap: YOUR WORLD IN ONE READ

At number 4, the latest outbreak of the Ebola Virus in West Africa is regarded by health workers as the “most challenging” yet.
World Health Organization’s Keiji Fukuda expresses concern over the spread of the virus from its epicenter to the forests of southern Guinea, which has never had an outbreak before.
Ebola leads to hemorrhagic fever, causing muscle pain, vomiting, and in severe cases, organ failure and unstoppable bleeding.
Most severe strains have a 90% fatality rate.

At number 5, polling stations open for Indonesia’s parliamentary elections.
It will determine who can run in the presidential polls on July 9.
Jakarta governor Joko Widodo or “Jokowi” is among the frontrunners.
Incumbent President Susilo Bambang is unlikely to be re-elected after a string of corruption scandals.
Widodo is expected to be challenged by Prabowo Subianto, who lags far behind in the polls.

At number 10, award-winning novelist Gabriel Garcia Marquez is in a delicate condition.
He was hospitalized on March 31 and treated for lung and urinary tract infections.
Mexican officials say Marquez had “quite severe pneumonic symptoms.”
Marquez is the author of award-winning novels “One Hundred Years of Solitude” and “Love In The Time of Cholera.”
He also won the Nobel Prize for Literature in 1982.

STORY 8: ROACH ON PACQUIAO: GYM, NOT GOD, WILL BRING VICTORY

If Manny Pacquiao is going to defeat Timothy Bradley in their Saturday rematch, it’s going to be because of what he does in the gym, not in church.
That’s what Pacquiao’s trainer Freddie Roach says when asked about the role religion will play in their return bout.
Roach says, “God doesn’t win the fight, God doesn’t care who wins the fight.
I think the guy who works the hardest will win the fight.
We don’t need to thank anybody but ourselves for working hard.
The best shape fighter that night will win the fight.”
Roach admits he’s seen some of Pacquiao’s killer instinct wane in recent years, beginning around the time he became more involved with religion.
Apart from boxing, Pacquiao is also a congressman in Sarangani province.
He also leads his own Christian ministry.
Bible studies and hymns have become as omnipresent in Pacquiao’s training camps as sparring and jumping rope.
Once known as the most ruthless, cold-blooded finisher in the sport, Pacquiao hasn’t scored a knockout since defeating Miguel Cotto in 2009.
He hit breaking point in 2012 with his decision loss to Bradley followed by his sixth-round knockout loss to Juan Manuel Marquez.
With Pacquiao nearing the twilight of his career at 35, Roach doesn’t want to see him hang on too long.
He says “We’ll think about retirement (if Pacquiao loses). I don’t want him to become a stepping stone. I won’t let it happen.”

Britain’s baby Prince George hosts his first ever official function with a group of toddlers in New Zealand Wednesday.
The 8-month old, whose parents Prince William and Kate began a tour of New Zealand on Monday met 10 local babies at Wellington’s Government House at a play session organized by non-profit childcare group Plunket.
Plunket president Tristine Clark says the babies were all roughly the same age as George and were chosen to reflect the diversity of New Zealand society, including various ethnic groups and a same-sex couple.
Not all Kiwis are thrilled. The New Zealand Republic lobby group says any of the 10 Kiwi babies would be better qualified as the country’s head of state than George, who is third in line to the throne in both Britain and New Zealand.
It says, “Baby George is as cute as any other baby… but unfortunately he cannot be New Zealand’s future head of state not unless he one day migrates to New Zealand and becomes a citizen.”

Move over, Grumpy Cat – a scowling Prince George’s going viral!
One of the young British royal’s photos from his New Zealand trip with his parents proved so meme-worthy that it spawned a lot of memes.