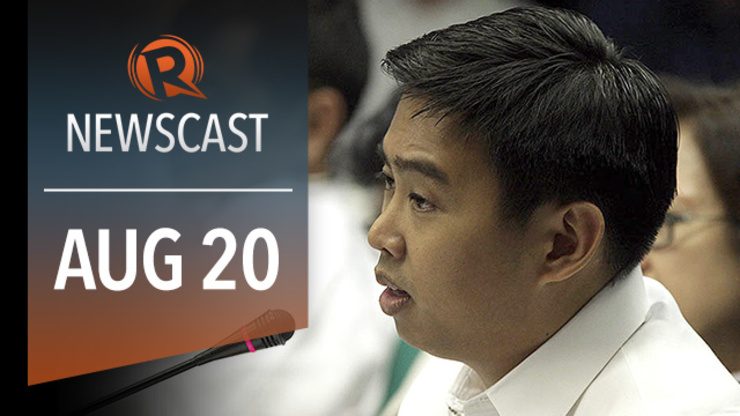 Senator Koko Pimentel says the presentation was not included in the agenda and should be skipped.
But Senator Antonio Trillanes says the cakes are a valid point of investigation.
Bondal adds, the Makati City Hall, hospital, and science high school buildings are all supposedly overpriced.
He claims the Binays and their allies overpriced the alleged parking building by P2 billion or $45.65 million.

(The people of Makati lost P2 billion because of the building they constructed from 2007 to 2013. The country needs to know the system of plundering the Binays did in Makati because Vice President Binay might do the same if he is elected President.
This is how we are in Makati. Our quality of living didn’t improve, unlike the leaders who governed our city.)

Bondal also accuses the Binays of violating the Government Procurement Act by splitting the building project into 5 contracts.
He calls Makati “the chop-chop capital of the Philippines.”
Mayor Binay cited a Commission on Audit memorandum saying the price of the building was “reasonable…”
but chairperson Grace Pulido-Tan clarifies it’s still under review.

JARDELEZA APPOINTED AS SUPREME COURT JUSTICE
President Benigno Aquino appoints Solicitor General Francis Jardeleza as Associate Justice of the Supreme Court Wednesday.
Jardeleza thanks Aquino and pledges to serve with the “interests of the Filipino people” in mind.
Jardeleza’s appointment is widely anticipated.
He was reported to be Aquino’s choice, even before the appointment was made.
He was initially excluded in the short list of candidates submitted to Aquino, due to integrity issues raised by Chief Justice Maria Lourdes Sereno, who chairs the Judicial and Bar Council.
Jardeleza’s integrity was reportedly questioned after he deleted a “portion” in the memorandum, submitted by the Philippines to a United Nations-backed tribunal seeking to challenge China’s claims, in the South China Sea or West Philippine Sea.
Rappler sources say the act would have resulted in a “colossal mistake” that would have undermined the country’s legal claim and territorial integrity.
On Tuesday, right before Aquino’s deadline, the Supreme Court granted Jardeleza’s plea for inclusion in the list of nominees.
It was Jardeleza’s third attempt to be part of the High Court.
He first applied for the SC post in 2011, and was a candidate to replace ousted Chief Justice Renato Corona in 2012.
Jardeleza also vied for the post of Ombudsman in 2011 but lost to retired Supreme Court Justice Conchita Carpio-Morales.

SEN ALAN CAYETANO, WIFE, FACE GRAFT RAPS
Senator Alan Peter Cayetano faces graft charges for the alleged misuse of his Priority Development Assistance Fund or PDAF and the purchase of overpriced multi-cabs.
Lawyer and university professor Rod Vera files separate complaints against the senator and his wife, Taguig Mayor Lani Cayetano.
Two graft complaints were filed against Senator Cayetano over the use of his development funds.
A plunder complaint was filed against the Taguig mayor over the alleged hiring of 3,188 ghost employees for Taguig City.
The Cayetanos are also respondents in a graft case over allegedly overpriced multicabs.
In a statement, the Cayetanos said the charges are a ruse to shift public focus…
from the probe on allegedly overpriced Makati buildings.
Vice President Binay and Cayetano both say they will seek the presidency in 2016.
The Cayetano camp also discredits the complainant, Vera, saying he is the classmate of Binay’s daughter, Makati Representative Abigail Binay-Campos.

ABAYA: PH TRANSPORTATION TO CATCH UP WITH COMMUTER NEEDS
Asked about the lackluster performance of his agency, Transportation secretary Jun Abaya says he is only picking up from his predecessor’s initiatives.
He says, laying down the blueprint of his department’s efforts requires years of advance planning.
He adds the Philippines is playing catch-up not only with the rest of the world, but also with its growing population.

JUN ABAYA, TRANSPORTATION SECRETARY: If you really wanna look long-term, there’s a new gateway, there’s going to be a new airport we’ll see in 2025. But given the rule of thumb that gateways like this… we as Filipinos, the way we also move and decide, probably this will take 15-20 years.
We have a masterplan for our airports. In rail systems the way is to migrate people from private cars to rail systems so we see an LRT1 project to Cavite, an LRT2 extension to Antipolo, which will also extend to the port area, we have MRT 3 eventually being bought and O&M being privatized, MRT 7 is about to start…
I’d often cite a rail expert, that the true test of a developed country is not when your poor get to ride the mass transit system, but it’s when your rich who gets to ride.

Abaya and his department have been under fire for the MRT train accident at the Taft Avenue station last week.
He says the investigation points to human error.

JUN ABAYA, TRANSPORTATION SECRETARY: Our findings it’s just human procedural error. It’s a type of finding you’ll have if you focus on the man, the driver, the people who run the system. We have to enhance training, currently they undergo refresher training once every year.. these are drivers that have gone through significant training.
They’ve gone through extensive training but they’re only human, lapses do happen. Likewise, we have to review our procedures.

Abaya says the government is committed to avoiding future accidents and addressing the demand for fast, cheap public transportation.

JUN ABAYA, TRANSPORTATION SECRETARY: Hopefully by 2040 we’ll be like Singapore or Hong Kong. Obviously, transportation projects are also dependent on the economy, amount of resources decided upon by decision makers that you allot for infrastructure. But clearly this administration when we get to 2016 has committed that we will ramp up infrastructure spending from I think 2.5% of GDP in 2013 to 3% in 2014, 4% in 2015, and by 2016 5% of our GDP will be devoted to transportation and infrastructure.

Amid calls for his resignation, Abaya defers to the President saying he can leave anytime.

JUN ABAYA, TRANSPORTATION SECRETARY: Actually Chay, I can go anytime. As I’ve said I have a family to take care of, I have three young kids to raise. Serving in government is a real privilege for me, especially under President Aquino…
But again, just like any other privilege, it could be taken away by the appointing person, anytime, and I’m not a man into drama. A simple text from the president that I should go, then I go.
I understand command responsibility. I came from the military. I also understand the concept of not abandoning your superior.

FVR: RAW INTEL SAYS 100 FILIPINOS TRAINING WITH ISIS
Former president Fidel Ramos expresses concern 100 Filipino Muslims in Iraq are training under the Islamic State, formerly known as Islamic State of Iraq and Syria or ISIS.
Ramos cites raw intelligence reports in a TV interview Tuesday.
He also recalls how brothers Abdurajak and Khadaffy Janjalani joined a group of about 90 Filipino Muslims trained in the Afghan war to form the Abu Sayyaf Group.
Ramos adds, the Abu Sayyaf is “encouraged by the success of ISIS and ISIL in Iraq.”
He echoed concerns of terrorism experts that returning jihadists would reinvigorate local radicals.
The Philippine military says the information Ramos shared has yet to be verified.
Intelligence sources say at least one Filipino linked to the Abu Sayyaf has gone to Syria to join ISIS.
The jihadist group ISIS traces its roots to at least two al-Qaeda-linked groups.
ISIS seized control of Syrian villages and Iraqi cities and is moving to capture more.
A video of senior Abu Sayyaf leader Isnilon Hapilon circulated a few weeks ago showing him with masked men swearing oath to ISIS.
The military downplays the video.
Intelligence chief Major General Eduardo Año says it is a case of the Abu Sayyaf giving “moral support” to the jihadist group, not the other way around.

JIHADISTS CLAIM BEHEADING OF US JOURNALIST JAMES FOLEY
More on ISIS…
Jihadists release a video of the beheading of an American journalist kidnapped in Syria Tuesday in retaliation for US airstrikes.
The video shows a masked militant beheading a man resembling journalist James Foley…
who has been missing since he was seized in Syria November 2012.
Foley was a veteran correspondent who covered the Libyan war.
He followed the revolt in Syria against Bashar al-Assad’s regime.
Foley contributed to many media outlets, among them GlobalPost and Agence France-Presse.
Witnesses say Foley was seized in the northern Syrian province of Idlib.
In the video, the group says Foley was killed because US President Barack Obama ordered air strikes against ISIS in northern Iraq.
ISIS threatened to kill another US reporter named Steven Sotloff if the bombings do not stop.

GAZA CEASEFIRE COLLAPSES, TRUCE TALKS FREEZE
The 24-hour ceasefire between Israel and Hamas collapses hours after its announcement.
The Israeli military blames militants in Gaza for the breakdown…
while Hamas points to the lack of progress in talks, blaming the Israelis.
Hamas’ armed wing the Qassam Brigades says it fired 29 rockets into Israel.
The Israel Defense Forces launches airstrikes and orders bomb shelters open.
At least 3 people are killed, and 52 injured since the breakdown of the ceasefire.
On Wednesday, Hamas says an Israeli air strike killed the wife and child of its Gaza military chief Mohammed Deif.
More than a month of fighting between Israel and Hamas has killed at least 2,020 Palestinians and 67 on the Israeli side since July 8.

AUSTRALIA, INDONESIA AGREE TO BURY SPY ROW
Australia and Indonesia agree to put their conflict over spying behind them.
Bilateral ties soured in November 2013 after Australian spies attempted to tap the phones of President Susilo Bambang Yudhoyono and his inner circle.
Jakarta recalled its ambassador from Canberra and suspended cooperation in several areas over the incident…
including efforts to stop people-smuggling boats reaching Australia.

TEENAGER BECOMES WORLD’S YOUNGEST F1 DRIVER
16-year-old Max Verstappen will become the youngest driver in Formula 1 history next season, after being named Toro Rosso’s latest recruit.
The teen is the son of ex-F1 driver Jos Verstappen.
The young Verstappen won the world go-karting championship in 2013, and was a regular Formula 3 podium finisher.

JACKIE CHAN’S SON ARRESTED ON DRUG-RELATED CHARGES
Hong Kong film star Jackie Chan’s son Jaycee, who has been detained in China on drug-related charges, is shown on television with boxes of cannabis.
The younger Chan was arrested August 14 “on suspicion of accommodating suspected drug users.”
His father Jackie has been an “anti-drug ambassador” since 2009.