Nov 28, 2014 8:47 PM PHT
Rappler.com
Facebook Twitter Copy URL
Copied
The Philippine National Police reports a ‘downward trend’ in crime in the capital. A hacker collective attacks a media integration platform affecting 80 news sites around the world. The Philippines is the newest market for a cheating website 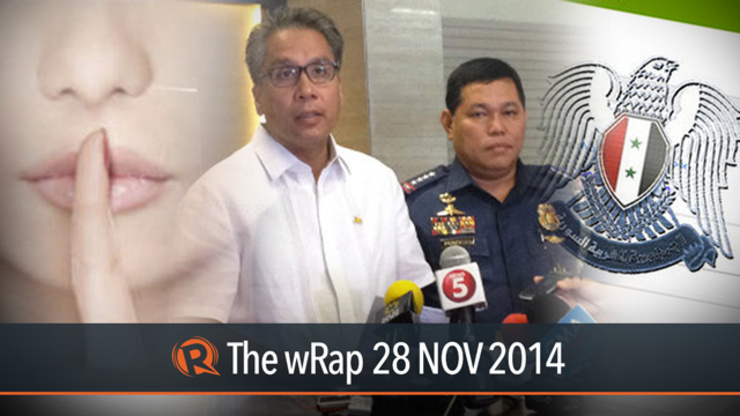 The Philippine National Police or PNP reports a ‘downward trend’ in weekly crime after six months in an experimental program. Called Operation Plan Lambat-Sibat, police chiefs are trained to report and tally crime statistics better. By coming up with more accurate crime data, the PNP hopes to be able to better deploy personnel. Interior Secretary Mar Roxas says there was no systematic approach to gathering crime data prior to this effort. He adds, there’s been substantial progress since the program’s launch.

MAR ROXAS, INTERIOR SECRETARY: It was too hit or miss, what we call bara-bara, ad hoc, kanya-kanya, in silos, and it was ningas kugon, or sporadic. We’re not happy yet where we are but happy enough that it stabilized.

The Commission on the Filipino Language or KHF translates the draft Bangsamoro Basic Law to Filipino to inform Filipinos about the proposed Bangsamoro political entity in Mindanao. The KWF says Bangsamoro Law stakeholders will be consulted before releasing an official Filipino translation. KWF Director-General Roberto Añonuevo says the commission, pending budget, plans to translate the draft to regional languages like Manobo, Tausug, and Maranao.

A group calling itself the Syrian Electronic Army attacked social media integration platform Gigya Thursday evening Manila time. This affected some top 80 news and sports sites around the world including Rappler. Sites like Forbes, The Guardian, CNBC, Al Jazeera and National Geographic were replaced with an image of an eagle marked by the Syrian flag. Gigya CEO Patrick Salyer says, “neither Gigya’s platform nor any user, administrator or operational data has been compromised.” The Syrian Electronic Army is a hacker collective supporting Syrian President Bashar al-Assad.

A group of Japanese scientists says e-cigarettes contain up to 10 times the amount of cancer-causing agents as regular tobacco. The study commissioned by Japan’s Health Ministry shows the vapor from e-cigarettes contains carcinogens such as formaldehyde a substance found in building materials and embalming fluids. The World Health Organization in August called on governments to ban the sale of e-cigarettes to minors warning they pose a “serious threat” to unborn babies and young people.

The Philippines is one of cheating website Ashley Madison’s newest markets, and the company is optimistic even though the Philippines is Asia’s largest Roman Catholic nation. Company spokesperson Christopher Kraemer says they do well in conservative markets and Catholic countries. He adds, “The Philippines unites all of those factors… plus, the additional factor is that divorce is illegal here in the country, which will be a new experience for us.”

For the full stories, click on the links on your screen.
And for those of you watching on mobile, the links can be found on the titles on the article.
You can also click on the tabs below to go to a story in the video.