Thirty years after the first EDSA Revolution, many myths about the Marcos era are being deliberately floated around especially among today’s youth.

Particularly alarming is the mistaken notion that the Marcos era ushered in the “golden age” for Philippine society, including the economy.

We thought we might contribute to the ongoing discussion by looking at the data and allowing them to speak for themselves.

Indeed, for the newer generations with virtually no means of recalling the brutal martial law era and the economic hardships that it brought, perhaps one of the best ways of reliving the Marcos economy is by revisiting the data and opening yourselves to the story these data show.

To do so, we picked the top 5 graphs which, to our mind, best illustrate the ill outcomes of the Marcos era on the economy.

1) We lost two decades of development 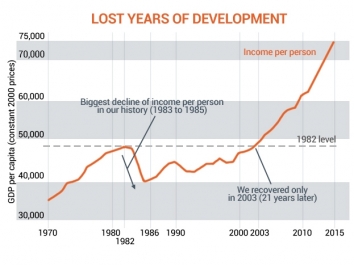 What the graph shows: A continuous increase in GDP per capita (or income per person) is usually understood as an overall improvement in economic welfare. Figure 1 shows that Philippine GDP per capita declined after 1982 and did not reach the same level until 2003, or 21 years later.

What it means: This severe retrogression of Filipinos’ income per person – called “lost decades of development” – testifies to a truly dark era in our economic history. It took the country an entire generation to recover from the bad outcomes of the Marcos regime’s economic policies and management. Even with this data alone, it is difficult to understand why many people cling to the idea that the Marcos regime, taken as a whole, brought about the Philippine economy’s “golden age”. 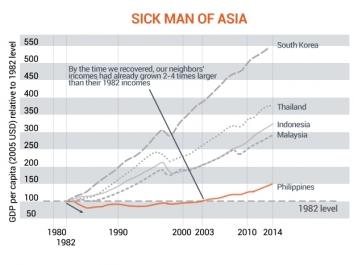 What the graph shows: The decline of income per person after 1982 was not seen in our neighboring countries; in fact their incomes went on to soar since then. By the time we recovered our 1982 income levels, their incomes had already grown between two to 4 times.

What it means: The economic setback due to the Marcos regime cemented our title as the “sick man of Asia” for the good part of the past 3 decades, and prevented us from partaking of the so-called “East Asian miracle”. Although we have enjoyed high annual growth rates of 5-7% in recent years, Figure 2 shows that we lost so much ground compared to our neighbors and catching up remains a huge challenge.

3) The regime borrowed too much too quickly The country’s stock of debts grew exponentially in the late 1970s, and this imprudent debt management burst into a full-blown crisis by 1983.

What the graph shows: Figure 3 shows the unsustainability of debt during the Marcos regime. From 1977 to 1982 (or in just 5 years) the country’s total external debt grew from $8.2 billion in 1977 to $24.4 billion. As a result, interest payments as a share of national income (in gray) increased eightfold in the same period, a trend closely mirrored by the debt-exports ratio (in orange).

What it means: For the country as a whole, borrowing per se is not a problem; it fact it can even spur growth. Borrowing is problematic only when it becomes unsustainable, or when the debtor fails to meet its obligations.

This is exactly what happened during the Marcos regime, whose many “successes” were built on “debt-driven growth”. While it is true that the regime embarked on an infrastructure spending spree, this was pursued largely to justify its existence and at the exorbitant cost of the ballooning of the country’s external debt. The situation was exacerbated by a confluence of external factors, including the Latin American debt crisis.

The 1983 debt crisis is a painful reminder of the long-run importance of sound and prudent macroeconomic management. Contrary to the Marcosian economic view, borrowing alone cannot induce growth. Instead, it requires deep, structural reforms that transform the economy fundamentally and promote growth through innovation and enterprise.

The crony capitalism espoused by the Marcos regime disincentivized enterprise and growth in favor of cronies’ interests, leading to the inimical stagnation of the manufacturing sector. 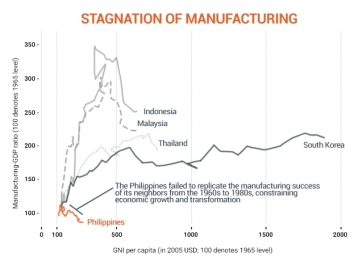 What the graph shows: The graph plots income per person (horizontal) versus the share of manufacturing to total output (vertical). The two variables usually go together, as experienced by our regional neighbors (notably South Korea); that is, income growth is usually accompanied by manufacturing growth. This would become the typical pattern of East Asian success that the Philippines, unfortunately, failed to replicate.

What it means: Although the Marcos era is remembered by many as an age of industrialization, it was characterized by “crony capitalism” where Marcos’ closest allies were awarded industries (e.g., TV and car manufacturing) and ambitious industrial projects (e.g., the Bataan Nuclear Power Plant), many of which ended up being inefficient or bankrupt. Such an economic environment led to the neglect and stagnation of the vital manufacturing sector, which, in turn, slackened the pace of the country’s structural transformation.

Finally, the martial law regime resulted in poor work conditions as testified by the sharp rise in underemployment, which at one point afflicted a third of the employed. 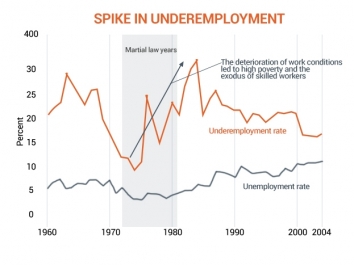 What the graph shows: Martial law coincided with a gradual rise in unemployment and more importantly, a precipitous rise in underemployment (from around 10% to 33% of the employed). Some scholars (including Prof Noel de Dios of UP) argue that for a developing country like the Philippines it may be underemployment (or the inadequacy of one’s work) that matters more than unemployment. After all, unemployment tends to be a middle-class phenomenon: most of the poor are employed, and most of the unemployed (e.g., college graduates) are nonpoor.

What it means: Since underemployment contributes to poverty, the severe underemployment brought by the martial law era gives a glimpse of the deterioration of welfare for Filipino households during that time. This dissatisfaction in the labor force (especially among skilled workers) would later give rise to the widespread growth of the OFW phenomenon after 1986.

The notion of a “golden age” of the Philippine economy under the Marcos regime, especially during its latter years, is a big, fat lie especially when pitted against the data during that time. It’s quite amazing (and disturbing) that a single man with absolute power could bring down an entire economy to a lower growth trajectory and set back the march of the country’s economic development by decades.

National Scientist Raul V. Fabella once said, “The annals of underdevelopment are filled with chapters on failures due to wasted opportunities”.

As we go to the polling booths on May 9, let us all heed the lessons of history and data, and choose leaders who will lead us to rapid, inclusive, and sustainable development by not repeating the mistakes of the Marcos regime (or even daring to kindle among the people its false, illusory glory). – Rappler.com

JC Punongbayan is a PhD student at the UP School of Economics. Kevin Mandrilla is an MA student at the UP Asian Center. The views expressed here do not necessarily reflect the views of the authors’ affiliations.