[OPINION] It’s our dissent that will save us 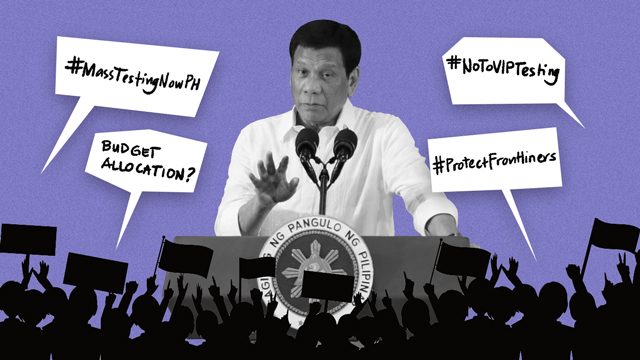 Facebook Twitter Copy URL
Copied
Many people have been going out, speaking out, challenging government’s response to the COVID-19 crisis and overcoming the limits set by the lockdown 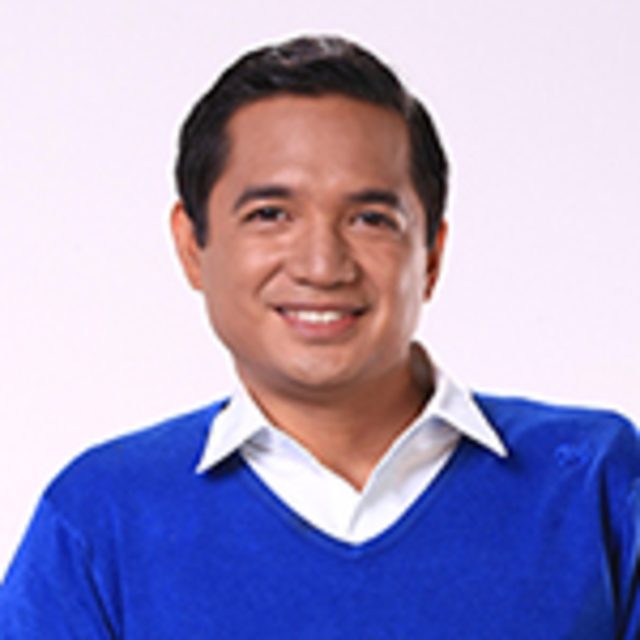 Stay home. Be quiet. We’re on it. Just wait. Help will come. Trust us. Do as you’re told or else.

These, in a nutshell, were the key messages pounded on the public by President  Rodrigo Duterte and his officials in the 3 weeks that the entire Luzon and other parts of the country have been on lockdown due to the COVID-19 outbreak.

But each message seems to have fallen on deaf ears. Many people have been going out, speaking out, challenging government’s response to the crisis and overcoming the limits set by the lockdown. This is certainly not a bad thing.

The outrage over the government’s late and tepid response to the COVID-19 threat started in late January, following Duterte’s initial refusal to impose a travel ban from China despite mounting evidence that travelers were spreading the virus outside Wuhan. Health Secretary Francisco Duque III told senators that the travel ban was a “very tricky and difficult issue” due to diplomatic and political repercussions. As late as January 24, tourists from Wuhan were still arriving in droves in Boracay.

Duterte’s stubborn deference to China was roundly criticized in mainstream and social media. The public outrage gave rise to the hashtag #OustDuterte which trended on Twitter on Janurary 31, the same day government finally imposed the travel ban.

Later on, again kowtowing to China, Duterte imposed a travel ban on Taiwan despite its low incidence of infection and absence of local transmission. The public uproar initiated by Overseas Filipino Workers (OFWs) and Taiwan’s threat to retaliate forced Duterte to rescind his illogical order.

After the travel ban fiasco, Duterte and his officials spent the next 3 weeks giving assurances that government was on top of the situation and that the country’s health system was well prepared for the pandemic. On February 4, Duque announced that Duterte had “approved in principle” P2.25 billion for personal protective equipment (PPEs) for 5,000 health workers. He also claimed on February 29 that the country had enough testing facilities to accommodate the expected surge in Covid-19 cases.

“We are prepared to handle this public health emergency in case the worst scenario happens,” Duterte told media on February 10, threatening to slap the virus and calling it “gago.”

It was obvious that the threat of a local outbreak was being belittled by no less than the President. At one point, he even ridiculed the safety protocols issued by the Department of Health (DOH), insisting on shaking hands and holding public meetings.

The President’s attitude rubbed off on his officials.

On February 18, more than two weeks after the first reported Covid-19 case in the country, tourism secretary Berna Romulo-Puyat announced the government’s plan to promote tourism despite public concern over the disease. “It’s safe to come to our country. No local transmission (of Covid-19) and the hotels and restaurants are ready,” she declared in a vain hope to spur local tourism and bring in guests from South Korea, the US, Australia, Japan and Europe.

Two days later, she also announced the holding of a nationwide mall sale from March 1-31 – dubbed the 2020 Philippine Shopping Festival  – to promote the country as a “fun, unique and affordable shopping destination.”

As late as March 9, despite the DOH’s declaration of a Code Red Sub-Level 1 alert and Duterte’s declaration of a public health emergency due to confirmed cases of local transmission, the President was still in a state of denial, announcing plans to visit Boracay with Romulo to encourage local tourism.

In contrast to Duterte’s nonchalance and in spite of Duque’s assurances that the DOH was ready and equipped to handle the threat, many health experts and professionals, policy makers, health workers organizations and concerned citizens persistently aired their doubts about the health system’s readiness to address the pandemic.

Of particular concern was the minimal testing and contact tracing being done, the shortage of face masks and other PPEs for health workers, the lack of quarantine and treatment facilities, including trained personnel. Critics noted the P147.4 million reduction in the DOH’s budget for disease surveillance as well as the P6 billion cut in its Health Systems Strengthening Program. Many demanded an immediate rechanneling of funds and resources to upgrade public hospitals and even baranggay health facilties for the expected local outbreak.

The many issues and concerns raised by government critics forced the public to take a hard look at government’s response to the health crisis. It forced a healthy debate that extended into the corridors of power. But all we got were more assurances that everything was being addressed.

The March 12 announcement of a lockdown confirmed our worst fears about government’s unpreparedness and lack of a comprehensive plan to address COVID-19.

The first meeting of the Inter Agency Task Force for the Management of Emerging Infectious Diseases (IATF) chaired by Duque was held on January 28, more than 20 days after China confirmed the corona virus outbreak. But for the next 4 weeks, the body overseeing the government’s comprehensive response to Covid-19 focused its attention on travel restrictions and quarantine protocols for foreign travelers and returning Filipinos, leaving all health matters to the DOH.

Unfortunately, just like Duterte, the DOH itself appeared to have underestimated the threat. On Febrary 28, Duque even announced that the number of persons under investigation (PUIs) in the country was decreasing, with those found negative of COVID-19 on the rise.

The DOH reported having no new cases for two consecutive weeks, earning a citation from the World Health Organization (WHO). Duque later admitted to Congress that he should have declared a public health emergency much earlier than the President’s March 8 declaration.

By this time, the number of confirmed and suspected COVID-19 cases was rising steeply by the day. Hospitals were reaching full capacity. Apparently the low number of confirmed cases in the country was due to the low number of tests being done and the negligible effort at tracing possible COVID-19 carriers. As a result, the DOH could not determine the actual extent of community infection. And even if it did, there were no quarantine centers to accommodate suspected carriers of the virus.

In a desperate move to contain the virus’ spread, Duterte adopted the IATF’s recommendation to subject the entire Metro Manila area to a lockdown by March 15. This caused widespread panic buying, a mass exodus from Metro Manila, massive traffic jams and throngs of stranded commuters trying to get in the next day, defeating the quarantine’s objective.

Finally, on March 16, Duterte expanded the lockdown to the entire Luzon Island, creating new and bigger problems on top of existing ones.

The lockdown measures aimed to impose strict social distancing protocols and limits on the movement of persons. But it was utterly lacking in health measures and steps to mitigate the lockdown’s impact on the economy and people’s livelihoods.

For two weeks, no one could give a straight answer on how many PPEs would be acquired by government, when, and how they would be distributed. No one could explain why VIPs were being tested yet ordinary PUIs were not. Nobody knew the protocols and mechanisms for putting up quarantine centers. And it seemed local government units (LGUs) were being left on their own to address the people’s health needs as well as the economic needs of those dislocated by the lockdown.

Worse, Duterte was asking for a draconian emergency powers law that was unnecessary and did not categorically address the many gaps in his government’s response to the crisis. With the lockdown in place, people took to social media to air their objections and suggestions.

The hashtags #NoToEmergencyPowers and #DuterteResign trended highly on Twitter in the run-up to Congress’ Mar. 24 special session to act on the measure.

Fortunately, Congress was listening. It struck down the unconstitutional provisions of the draft bill and tempered some draconian features. The Senate in particular put in clear and definite measures regarding the budget and the various health and socio-economic measures to address the crisis.

From dissent to concrete action

By the time Duterte imposed the lockdown on Luzon, groups and individuals critical of the government’s response took to social media not only to pressure the government to act on their demands but to organize networks to meet those needs without government help. Criticism and protest had turned into concrete action, whether by the critics or the objects of their criticism.

Powerful hashtags like #MassTestingNowPH, #NoToVIPTesting and #ProtectFrontliners captured the demands of a disgruntled public, resulting in changes in the way government has responded to Covid-19.

Likewise, hashtags like #TanongNgTaongBayan and #NasaanAngAyuda captured the demands for urgency and transparency with regards to government’s response to the people’s health and socio-economic needs, providing much needed pressure for government to act.

The sense of protest and outrage over government inaction and incompetence has spurred ordinary citizens to use social media to creatively fill the gaps in providing food, transportation and PPEs to health workers; giving relief packs to poor families and vulnerable communities; and even raising bail for those arrested during the lockdown.

As always, social media’s backlash to Duterte’s fascist moves was immediate and fierce. A few minutes after Duterte’s April 2 rant where he ordered the police and baranggay tanods to shoot quarantine violators if they felt threatened, the hashtag #OustDuterteNow trended, gathering almost half a million tweets until the wee hours of the morning.

The next day, the President was compelled to clarify his pronouncements.

What all this indicates is that in the time of Covid-19, dissent is not only healthy. Given government’s bungling, militarist response to the crisis, it is our dissent that will save us. – Rappler.com