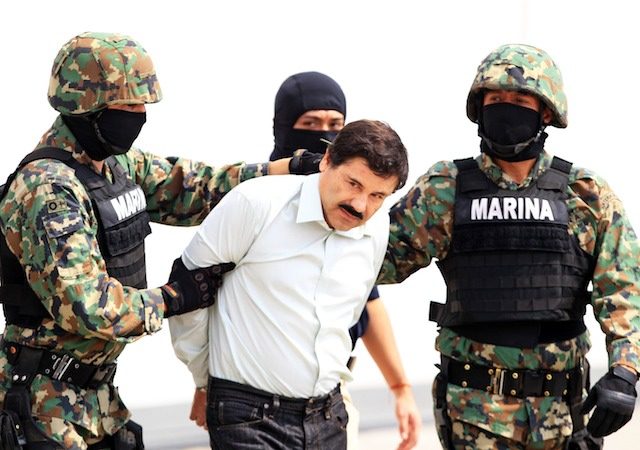 Facebook Twitter Copy URL
Copied
Police from around the world are on the case of Mexican drug lord Joaquin 'El Chapo' Guzman, relying on human intelligence and electronic surveillance to track him down

Almost 3 weeks after Guzman’s brazen jailbreak, US Drug Enforcement Administration Deputy Administrator Jack Riley told Agence France-Presse he was “optimistic” the Sinaloa drug cartel kingpin will be recaptured, though it will be tough.

“The hunt for him is a marathon, not a sprint,” the DEA’s number two official said in a telephone interview from Washington.

“We learned when we grabbed him the first time that it wasn’t easy, so obviously it’s kind of a cat and mouse game for us now.”

But he fled again on July 11, slipping down a tunnel under a maximum-security prison outside Mexico City.

US and Mexican authorities have been working “shoulder to shoulder” since then, Riley said, rejecting reports that President Enrique Peña Nieto’s administration was reluctant to accept US help.

While Guzman may be hiding on his home turf in the northwestern state of Sinaloa, police from around the world are on the case, relying on human intelligence and electronic surveillance to track him down.

“We work with our Mexican counterparts with all the information they have south of the border, and other places in Central and South America and even in Europe and Australia – all of that information is funneling together to get a big picture,” Riley said.

“For years, Chapo banked on the fact that cops were not talking to cops. But I can assure you that we are doing it better now than we have ever done it, and if I was Chapo, I would be looking over my shoulder.”

The investigation has gone global because the large and powerful Sinaloa “has tentacles all over the place,” and any information could “help us track him down or track someone very close to him down,” Riley said.

Guzman’s second jailbreak has fueled a debate about whether Mexico should have extradited him or other drug lords to the United States.

While the DEA will “certainly” ask for Guzman’s extradition if he is caught, Riley said he understood why Mexicans wanted to try him first as he is been responsible for countless deaths in Mexico.

“Here’s my read on it: I just want the guy in jail somewhere because that’s where he belongs,” he said.

US officials suspect Guzman has gone to Sinaloa’s remote mountains, where he has nurtured a Robin Hood image among locals.

“I can see if I was him returning to Sinaloa where I control the surroundings, I probably have a security force that rivals many police departments, and I’m in a situation where I can be forewarned if the good guys are making a move on me,” Riley said.

Guzman, 58, has probably sought to “consolidate his authority” over the cartel since his escape, he said.

While his capture weakened the group, it remained the country’s biggest criminal organization, with Guzman’s children and closest associates sharing the leadership.

“If the CEO who ran your company with a tight fist for 20 years was suddenly removed from power, the organization itself shutters, alliances become in flux, people become somewhat independent when before they were waiting for orders, communication becomes undisciplined,” Riley said.

“That’s really an opportunity for law enforcement on both sides of the border to make substantial hits, and I really believe that we did.”

But the hunt is back on.

Asked whether it could take years to find Guzman, Riley said: “No, and I’ll tell you why: because I don’t have years left on this job, and I’m not leaving until this guy’s hooked up (captured).” – Laurent Thomet, AFP / Rappler.com