Leaving Islam: How I became an atheist 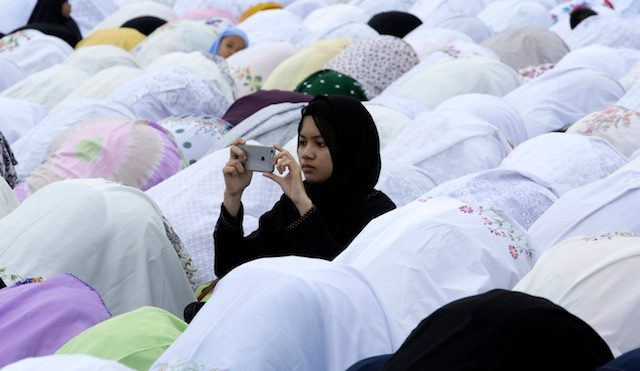 Facebook Twitter Copy URL
Copied
'No matter how many good things you have done before you kick the bucket, if you are not a Muslim, then bad news for you. Even back then, I had a problem accepting that part of the religious teaching'

“In the afterlife, only Muslims get to enter paradise.”

That was what my Quran tutor told me when I was in fourth grade. The moment she told me that, I was really, really, surprised.

One of the things that I learned from her was that entering paradise is a Muslim privilege. No matter how many good things you have done before you kick the bucket, if you are not a Muslim, then bad news for you.

Even back then, I had a problem accepting that part of the religious teaching.

My mother is a Catholic woman, a devout one in my opinion. When I was very little, I spent a lot of time with my grandparents from my mother’s side. They had to babysit me a lot because both my parents were working back then.

They had a lot of Catholic ornaments in their house – crucifixes on the walls, a statue of Virgin Mary, pictures of various saints, and many others. They would tell me stories about Jesus when they were babysitting me and I liked those stories.

When I was not being babysat by them, my father usually told me to perform shalat prayers with him. I did not know how to actually perform the prayers, of course, but I would just follow the movements from him.

That was my early childhood. I was always aware of the fact that my parents had different religious backgrounds. I did not have any problem accepting that fact – it all just made sense to me. I also knew that there were other people with other religious beliefs out there and thought that all of those different beliefs were as valid as mine. I had already identified as a Muslim at the time. If anyone asked me what my religion was, I would answer: Islam.

I never thought that my religion was superior to others, though. Until my Quran tutor taught me otherwise.

I guess that was the starting point of the journey that led me to become an agnostic-atheist.

I had a problem accepting the doctrine of the superiority of Islam over other religious beliefs, that only Muslims can enter paradise after the apocalypse. I loved my grandparents and I thought that it was not fair that they were going to hell just because they believed in God in a different way than I did. As I grew up, I started having other questions regarding other aspects of Islam such as the role of women in the traditional views of Islam and LGBT rights, but I was also afraid to question those views further because I did not want to go to hell for doubting my faith.

It wasn’t until my second year of university that I finally stopped practicing Islam. I stopped performing shalat, I stopped going to the masjid (mosque) every Friday, and I stopped performing shawm (fasting) during Ramadan. I did not identify as a Muslim anymore. I was not an atheist yet at the time. I was kind of a deist, still believing in a “higher power” of some sort. But I had finally become a murtadin (apostate).

I was not open about my epiphany to my parents. I lived in a kost (a boarding house for university students) in Yogyakarta when I first stopped identifying as a Muslim, while my parents lived in Jakarta, so that made it easier for me. But every time I went back to my parents’ house in Jakarta, I would pretend that I was still a Muslim.

“The main crisis that humanity faces now is not religion, as many atheists would suggest. it is the oppressive power structures that oppress lgbt people, religious minorities (including but not limited to atheists), women, the working class and other oppressed groups.”

Ramadan was the hardest challenge for me. I had to pretend that I was fasting and think of how to sneak food into my room without getting caught. Every time I went back to Jakarta during university break, I could not wait to go home to my kost in Yogyakarta.

I began to have curiosity about Buddhism during my first years of apostasy. I read a lot about Buddhism and also went to the local Buddhist temple near my kost to learn more about it. I used to meditate regularly, and I am still trying to now.

I was really into Buddhism for a while, until I grew skeptical of its supernatural aspects. I still think that Buddhism is a wonderful means of spirituality, though. You might even call me a Buddhist-atheist or a secular Buddhist. I just find it hard to believe in the supernatural aspects of Buddhism, or in supernaturalism in general.

What first made me became more skeptical of supernaturalism were the works of Richard Dawkins and other prominent figures of the New Atheist movement. I read The God Delusion and also watched his speech on YouTube. If you did not know, Buddhism is a non-theistic religion. So even before I became a full-time atheist, I already had a problem with the concept of an anthropomorphic god.

One of the things that got me into Buddhism in the first place is that it does not have a belief in such a god. When I became interested in New Atheism in general, I started to be more and more skeptical about any supernatural claim, and, consequently, the supernatural aspects of Buddhism.

Before I knew it, I became an atheist.

Becoming an atheist was not a conscious decision for me. It was not like I woke up one day in the morning and said to myself, “I think I want to be an atheist!” There was not an exact moment when I knew I was an atheist. Being an atheist was more of an outcome of a long thought process in my experience. When I realized that I was, technically, already an atheist, I joined the Indonesian Atheists group on Facebook. When I first started identifying as an atheist, I was somewhat into the New Atheists movement. Yes, I was “that kind of atheist”, which I am now quite ashamed of. I was borderline Islamophobic, partly because as an apostate, I was oppressed by the Muslim hegemony in Indonesia, and also because I had to pretend to believe in Islam in front of my family.

Most of the atheists I knew from the Facebook group were also these arrogant, militant atheists, who influenced me to turn into one.

It was my interest in Leftist discourses, especially in anarchism, that made me ditch the New Atheist movement eventually. I realized that the prominent New Atheists like Richard Dawkins, Sam Harris, and Christopher Hitchens are U.S. Imperialist apologists. I also learned about feminism, which made me come to the conclusion that Dawkins is sexist.

I am still an atheist, an agnostic-atheist to be exact. I do not claim that I know there is no God, I am just skeptical that such God exists. However, I am a different atheist from what I was before. Rather than putting my energy into debating religious people that they are wrong about God, I am more concerned about other important issues like gender, race, class, the environment, and human rights.

I have also stopped making hasty generalizations about religious people, as many atheists tend to do. I know a lot of religious people, who are also feminist and LGBT-allies, while, on the other hand, there are a lot of atheists who are sexist, racist and classist, which proves that bigotry is not exclusive to religious people.

The main crisis that humanity faces now is not religion, as many atheists would suggest. It is the oppressive power structures that oppress LGBT people, religious minorities (including but not limited to atheists), women, the working class and other oppressed groups. All people, no matter their religious, racial, or national backgrounds, should work together to dismantle this oppressive power structure.

This transformation and journey through religion is what makes me a Magdalene, unique and determined in the hope that other atheists or all of humanity in general, will understand this and fight for a just world. – Rappler.com

This story was first posted in Magdalene, an online magazine that offer a slanted guide to women and issues. To celebrate Magdalene’s 2nd Anniversary, Magdalene held a writing competition with the theme “Why I am Magdalene”, inviting readers to write an essay on why they find themselves in Magdalene, and how its content and messages resonated with them. This piece won 3rd place in the competition.

Aditya Nandiwardhana is that leftist-vegan atheist your mother warns you about and a proud Social Justice Warrior. He spends his time trying to change the world one bit at a time in between binge-watching illegally downloaded TV series.