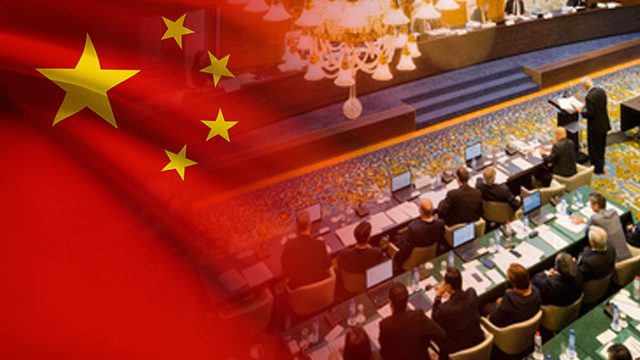 Facebook Twitter Copy URL
Copied
China refuses to participate in the proceedings, arguing that the case is about sovereignty and the court cannot rule on it

BEIJING, China – China will disregard any findings by an international tribunal on a case brought by the Philippines over disputed islands in the South China Sea, Beijing said Friday, October 30, after the court decided to consider the action.

The Permanent Court of Arbitration – which is more than a century old and based in The Hague – ruled on Thursday that it did have jurisdiction on the issue.

Manila insists the United Nations Convention on the Law of the Sea, which the Philippines and China have both ratified, should be used to resolve the bitter territorial row over isolated reefs and islets, which has triggered growing international alarm.

But China has refused to participate in the proceedings, arguing that the case is about sovereignty and the court cannot rule on it.

“We will not participate and we will not accept the arbitration,” Vice Foreign Minister Liu Zhenmin told reporters in Beijing.

“The ruling or the result of arbitration will not affect China’s position,” he added.

“It won’t affect China’s sovereignty rights and jurisdiction in the South China Sea, our rights will not be undermined.”

As veto-wielding permanent member of the UN Security Council, the stance will put Beijing in a difficult diplomatic position if the court rules that it has violated one of the UN’s own statutes. (FULL TEXT: PH’s round 1 win vs China over West PH Sea)

Beijing insists it has sovereign rights to nearly all of the South China Sea, a strategic waterway through which about a third of all the world’s traded oil passes.

The disputed waters – also claimed in part or whole by Vietnam, Malaysia, the Philippines, Taiwan and Brunei – have also become the stage for a tussle for regional dominance between Beijing and Washington, the world’s two largest economic and military powers.

This week, the American USS Lassen guided missile destroyer sailed within 12 nautical miles of at least one of the land formations claimed by China, sparking fury in Beijing.

Following a stand-off between Chinese ships and the weak Philippine navy in 2012, China took control of a rich fishing ground called Scarborough Shoal that is within the Philippines’ exclusive economic zone.

Over the past year China has asserted its stance by rapidly converting tiny reefs into islands for facilities with military uses, including as many as 3 runways.

The tribunal – set up in 1899 to resolve international disputes between countries – stressed Thursday its ruling did not yet go to the heart of the merits of Manila’s case, which was first filed in 2013.

A new hearing will now be held behind closed doors in The Hague, and a final decision is not expected until next year. – Rappler.com