Nov 21, 2015 12:08 PM PHT
Ayee Macaraig
Facebook Twitter Copy URL
Copied
The Malaysian Prime Minister mentions the bombings and shootings in Paris and Beirut, the attack on a plane full of Russians in Egypt, the Mali hostage-taking, and the murder by the Abu Sayyaf of a Malaysian hostage 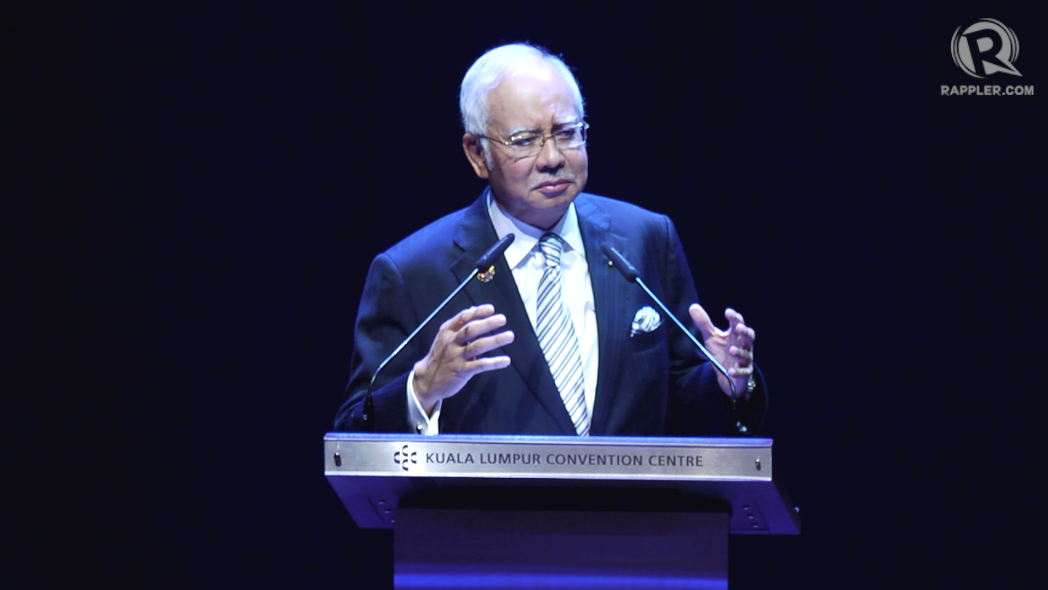 Najib struck a somber tone at the opening ceremony of the 27th Association of Southeast Asian Nations (ASEAN) Summit here on Saturday, November 21, saying the series of terror attacks “cast a shadow” on the meeting set to focus on economic integration.

Malaysia is chair of the ASEAN Summit being held in Kuala Lumpur from November 21-22.

Before ASEAN leaders, including Philippine President Benigno Aquino III, the Malaysian leader cited the bombings and shootings in Paris and Beirut, the attack on a plane full of Russians in Egypt, the Mali hotel hostage-taking, and the murder of a Malaysian in the hands of the Abu Sayyaf group in southern Philippines.

“We are ever vigilant against a threat that is very real in our region. Local militants and groups such as Abu Sayyaf have sworn allegiance to the so-called Islamic State. It was they who cruelly murdered our countryman Bernard Then on Tuesday.”

He added: “There cannot be a person in this hall who has not been shocked, shaken by the sickening disregard for human life, and the devastation [caused] on families and communities. Our countries are in mourning. We all share in this grief.”

While in the Philippines for the Asia-Pacific Economic Cooperation (APEC) summit on Wednesday, Najib condemned the beheading of Then. The Malaysian captive was abducted from Sabah in May. The Philippine military said he was killed after “a failure of the negotiations about money.”

“The Philippines extends its deepest sympathy and condolences to the bereaved family, and stands in solidarity with Malaysia and ASEAN in resolutely fighting terrorism,” Coloma said.

The Abu Sayyaf is blamed for some of the worst terror attacks in the Philippines. It is known for kidnapping foreigners and Filipino captives for months and years, and releasing them in exchange for money.

‘Evil that blasphemes vs Islam’

Leaders of the 10-member ASEAN are meeting under a cloud of terrorist attacks, and a terror threat directed against the high-profile meeting this weekend.

On November 13, suicide bombers and gunmen belonging to the Islamic State of Iraq and Syria (ISIS) killed 129 in Paris. In Beirut, Lebanon, 43 died in an attack at a busy shopping district. Russia announced that the downing of a plane carrying its citizens was caused by a bomb attack, which ISIS also claimed.

Just on the eve of the ASEAN Summit, separatist Islamist gunmen stormed the Radisson Blu Hotel in Mali, with at least 27 fatalities.

The leader of a Muslim majority nation, Najib denounced the attacks as an affront on Islam.

“The perpetrators of these cowardly, barbaric acts do not represent any race, religion or country. Nor should we allow them to claim to do so…. We stand with you against this new evil that blasphemes against the name of Islam,” he said.

A former defense minister, Najib urged ASEAN to find new solutions to the problem of extremism.

Terrorism threatens Southeast Asia, with over 500 Indonesians and more than 50 from Malaysia joining ISIS as of mid-2015, according to regional intelligence officials. Reports of suicide bombers planning to disrupt the ASEAN Summit also put Malaysia on high alert.

“A military solution alone will not be enough to defeat those who want to cause war,” Najib said. “It is the ideology propagated by these extremists that is the cause of this sadistic violence. We must not lose sight of the fact that the ideology itself must be exposed as the lie that it is, and vanquished for it is not Islamic. It cannot be.”

Najib quoted from the Quran and the Bible to point out that suicide bombings are “an utter travesty of a religion of peace, justice and moderation.”

The prime minister then again pushed for moderation, an issue Malaysia highlights to fight Islamophobia and extremism.

“It’s a concept deeply embedded in the ASEAN Way. Here in Malaysia, our unique mixture of faith, ethnicity could have divided us but instead diversity strengthened us. The thoughts and prayers of us all Muslims, Hindus, Buddhists, Christians and people of other faiths are with the people of France, Russia, Lebanon, Mali.”

In the East Asia Summit including ASEAN partners on Sunday, the leaders will sign a declaration on the “Global Movement of Moderates” to promote moderation as a tool against terrorism.

All 10 leaders of the ASEAN are attending the meeting in Kuala Lumpur. ASEAN includes Brunei, Cambodia, Indonesia, Laos, Malaysia, Myanmar, the Philippines, Singapore, Thailand, and Vietnam.