Under fire over sea row, China woos ASEAN with $10B in infra loans 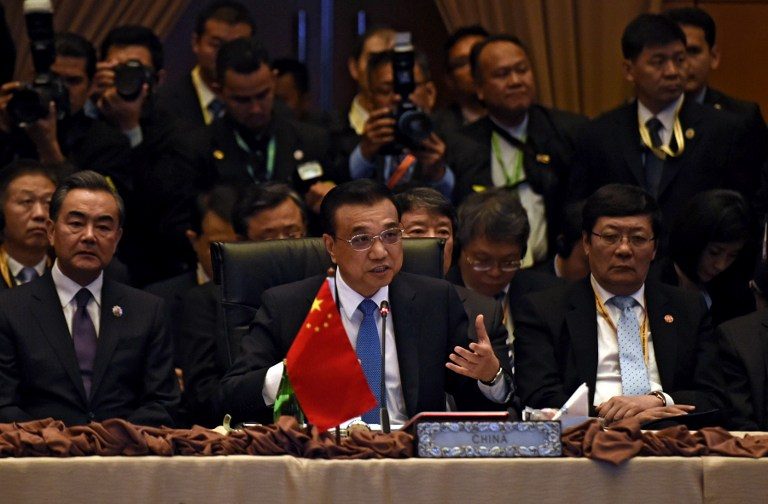 Facebook Twitter Copy URL
Copied
China offers to boost trade and economic ties with ASEAN as the Philippines, US, Japan and India raise the South China Sea row during the ASEAN summits

KUALA LUMPUR, Malaysia – Under international pressure to stop its land reclamation in the South China Sea, China sought to appease Southeast Asian leaders by offering them $10 billion in infrastructure loans.

Chinese Premier Li Keqiang made the pledge to members of the Association of Southeast Asian Nations (ASEAN) in a summit between the regional bloc and Beijing here on Saturday, November 21. Chinese officials reiterated the offer on Sunday in a news conference during the two-day ASEAN summit and related meetings held at the Malaysian capital.

China did not provide details on how this fund could be accessed or who would manage the fund.

In the ASEAN-China Summit, Li delivered a 6-pronged proposal on ASEAN-China cooperation, focusing largely on trade.

Li also called for the early conclusion of negotiations for a proposed free trade area among ASEAN, Australia, China, India, Japan, New Zealand and South Korea. Officials said the talks on the Regional Comprehensive Economic Partnership (RCEP) will be concluded by 2016.

RCEP is seen as China’s response to the US-led trade deal called the Trans-Pacific Partnership (TPP) that involves 12 countries excluding Beijing. The TPP was finalized in October after 5 years of talks.

China’s head of government said ASEAN and China must combine regional development strategies with Beijing’s Belt and Road Initiative which aims to create a trade and infrastructure network.

Li said China will continue pushing for the construction of a pan-Asia railway network, and “do its best” to start constructing railways linking China with Thailand and Laos by year-end, reported Xinhua.

China wants Code of Conduct, too

China made the $10 billion offer as it faced repeated criticism over its island-building spree in the South China Sea during the regional summit.

Philippine President Benigno Aquino III and US President Barack Obama called on Beijing to stop reclamation, and to comply with international law.

The Philippines, Vietnam, Brunei, Malaysia and Taiwan also have claims to the South China Sea, a rich fishing ground believed to hold vast deposits of oil and gas. It is a crucial shipping route for global commerce.

Li sought to downplay the row, reiterating China’s line that it does not hinder freedom of navigation in the sea.

The Chinese premier also said that Beijing was “willing to quickly conclude” a legally-binding deal with ASEAN “on the basis of consensus.” Li though did not give a timeframe for the pact after 13 years of delay.

Aquino made the Code of Conduct on the South China Sea a focal point in his ASEAN interventions, calling on Beijing to take the lead to swiftly conclude talks instead of dragging its feet.

On Sunday, China signed on to a statement of the East Asia Summit supporting the implementation of the non-binding 2002 Declaration on the Conduct of Parties in the South China Sea, and the early conclusion of a Code of Conduct.

The East Asia Summit is the primary forum discussing strategic, political and security issues in the region.

In an obvious reference to the US, Li said parties that are not claimants in the dispute should not “hype” the issue.

“That is in nobody’s interest. Only by expanding our common interests and seeking common ground can we narrow our differences,” Li added.

Despite Li’s statements, Aquino was highly critical of Beijing all throughout the summits.

Aquino told East Asian leaders including Li: “The world is watching and expects no less from a responsible global leader.” – Rappler.com