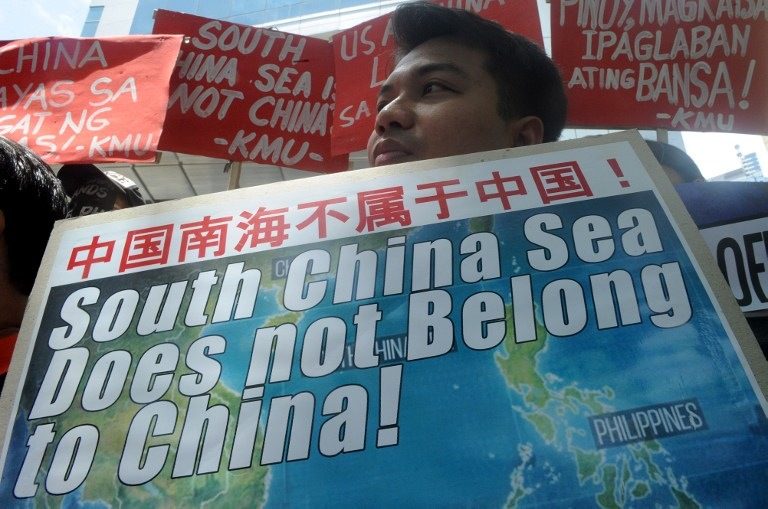 Facebook Twitter Copy URL
Copied
An international tribunal based in The Hague 'commenced the hearing on the merits and remaining issues of jurisdiction and admissibility,' says a statement

THE HAGUE, Netherlands – An international tribunal on Tuesday, November 24, began hearing a case brought by the Philippines over disputed islands in the West Philippine Sea (South China Sea), in an increasingly bitter row with China.

The Permanent Court of Arbitration “commenced the hearing on the merits and remaining issues of jurisdiction and admissibility,” the Hague-based tribunal said in a statement.

Manila has called for the tribunal, which is more than a century old, to rule on the dispute, appealing to the UN Convention on the Law of the Sea. (READ: Powerhouse PH team vs China back in The Hague)

Beijing claims almost all of the West Philippine Sea, putting it in conflict with several neighbors, and is a party to the Convention but has rejected the court’s jurisdiction on the issue.

“Our position is clear: we will not participate to or accept the arbitration,” foreign ministry spokesman Hong Lei told a regular briefing earlier Tuesday.

The hearing, expected to last until November 30, is being held behind closed doors. But Australia, Indonesia, Japan, Malaysia, Singapore, Thailand and Vietnam are allowed to have observers present.

Beijing has never precisely defined its claims to the strategic waterway, through which about a third of all the world’s traded oil passes.

The waters – claimed in part by Vietnam, Malaysia, the Philippines, Taiwan and Brunei – have become the stage for a tussle for dominance between Beijing and Washington, the world’s two largest economic and military powers.

Following a stand-off between Chinese ships and the weak Philippine Navy in 2012, China took control of a rich fishing ground called Scarborough Shoal that is within the Philippines’ claimed exclusive economic zone.

Beijing has in recent years rapidly built artificial islands, which neighbors fear will be used as military outposts.

Manila hopes that a ruling in its favor from the court, which was established in 1899, could put pressure on Beijing to rein in its territorial ambitions.

In a July hearing in The Hague, Philippine Foreign Secretary Albert del Rosario warned the very integrity of UN maritime laws was at stake.