Defiance in Paris as #COP21 wraps up 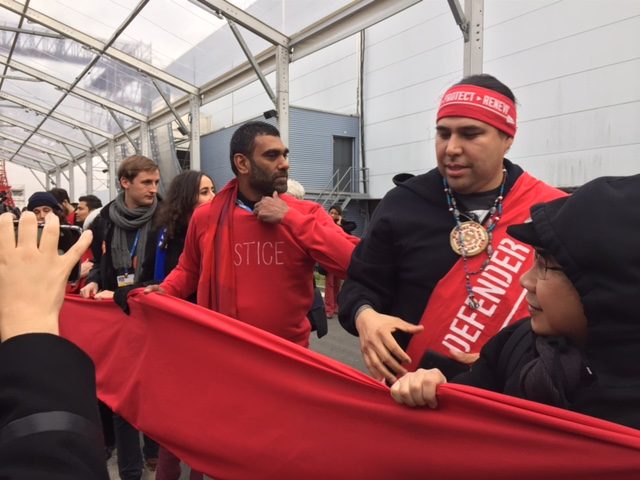 Facebook Twitter Copy URL
Copied
Activists say their protest action will be a reminder that any progress in the battle against climate change will be 'led by the people, not politicians'

PARIS, France – About 10,000 activists will descend on the “City of Light” to paint the town “red” on Saturday noon (Paris time), December 12.

“The action will be a reminder that there is no complete triumph in the battle against climate change. Any progress will be led by the people, not politicians,” various groups including 350.org, Greenpeace, Attac, Confederation Paysanne, Roseau Sortir du Nucléaire, and Climate Justice Action declared as climate talks end in Paris.

The protest defies the French government’s ban on demonstrations in the wake of the November 13 terror attacks that left the city in shock.

Thousands of shoes earlier stood for the protesters who could not mass up for big actions before world leaders, negotiators, and observers kicked off the two-week summit.

‘You can put Eiffel Tower through deal’

Past climate talks were marked by intense protests on the sidelines as countries drill on an agreement that’s expected to be watered down.

The deal in Paris is no different, activists said.

“The text has so many loopholes you could put the Eiffel Tower through it,” Greenpeace International executive director Kumi Naidoo said.

“The language on loss and damage is very weak and will not satisfy developing countries,” Naidoo stressed.

Delegates from Asia also joined Naidoo and other global activists in criticizing the outcome of the conference.

“Limiting warming to 1.5°C means nothing less than a drastic and systemic change in worldwide energy consumption and pollution. However, we are still on track for 3 or more degrees of warming, even if all national climate plans were actually implemented,” said Gerry Arances, coordinator of the Philippine Movement for Climate Justice.

Philipppine activist think tank Ibon International, meanwhile, called the Paris deal “illegitimate and immoral even before it is sealed.”

On Friday, December 11, over a hundred civil society observers formed a long red line down the main corridor of the Blue Zone in Le Bourget, venue of the summit. According to the activists, the line represented civil society’s own “red lines” or non-negotiable issues: equity, finance, justice, zero emissions, and compliance.

The negotiations sought to forge a strong and binding climate deal that is supposed to hold average global temperatures below 2 degrees Celsius, the disastrous tipping point of climate change. (WATCH: #COP21: Not ready for 1.5-degree-Celsius cap?)

On the traffic circle and streets around the Arc de Triomphe in Paris, activists are painting the roads yellow to create the image of a giant shining sun. #cop21 updates here: rappler.com/climatechange Photo by Greenpeace International

Ahead of Saturday’s action, Greenpeace painted the traffic circle and the streets around the Arc yellow to create the image of a huge shining sun.

“We hope that as every delegation takes off, in the air they will see the image of the sun on the ground, just a reminder that when they get back home, they have to start improving their ambitions on the current commitments they made here.”

“They need to know now that they have opened themselves up to the start of a series of climate litigation,” Naidoo said. – Rappler.com