RIYADH, Saudi Arabia (UPDATED) – Saudi Arabia broke off diplomatic ties with Iran on Sunday, January 3, after protesters ransacked its embassy in Tehran to protest the execution of a Shiite cleric whose killing has sparked fury.

Saudi Foreign Minister Adel al-Jubeir made the announcement at a news conference in Riyadh, and said Iranian diplomats had 48 hours to leave the kingdom.

Saudi Arabia “is breaking off diplomatic ties with Iran and requests that all members of the Iranian diplomatic mission leave… within 48 hours,” Jubeir said.

“Iran’s history is full of negative interference and hostility in Arab issues, and it is always accompanied by destruction,” he said, accusing Tehran of seeking to “destabilise” the region.

On Saturday, January 2, a mob attacked the Saudi embassy in Tehran and a consulate in the second city of Mashhad amid protests at Nimr’s execution.

Jubeir said Saudi authorities had asked their Iranian counterparts to ensure security at the embassy but they did not cooperate and failed to protect it.

Nimr, 56, was a force behind 2011 anti-government protests in oil-rich eastern Saudi Arabia, where Shiites have long complained of marginalisation.

He was put to death along with 46 other people, including Shiite activists and convicted Sunni militants who the Saudi interior ministry says were involved in Al-Qaeda attacks that killed dozens in 2003 and 2004.

Some were beheaded and others were shot by firing squad.

Iran has said it arrested 44 people over the embassy attacks, and President Hassan Rouhani said the demonstrators were “radicals” and the assaults “totally unjustifiable”.

“The unjustly spilt blood of this martyr will have quick consequences,” he said, adding “It will haunt the politicians of this regime.”

Relations between Sunni-ruled Saudi Arabia and Shiite-ruled Iran have been strained for decades, with Riyadh frequently accusing Tehran of interfering in Arab affairs.

The two countries have also been divided over the nearly five-year war in Syria, where Iran is backing the regime, and the conflict in Yemen where a Saudi-led coalition is battling Shiite rebels.

Khamenei was joined in his condemnation of Nimr’s execution by Iraq’s top Shiite authority, Grand Ayatollah Ali al-Sistani, who called the death sentence “an unjust act of aggression”. 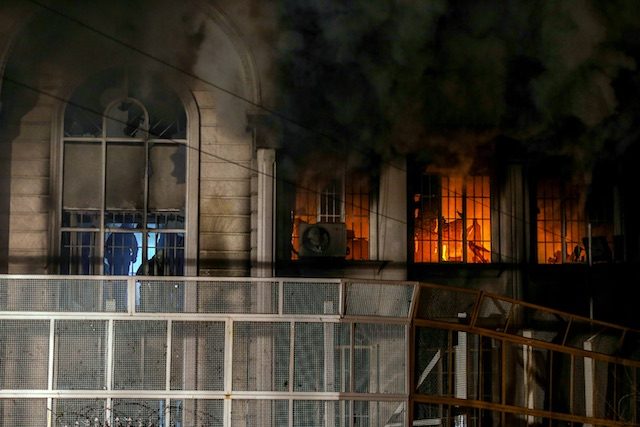 Their comments, echoed by other regional religious and political leaders, came as protests in Iran on Sunday spread to Bahrain, Pakistan, Indian Kashmir and Lebanon.

Saudi Arabia branded Nimr an “instigator of sedition” and arrested him in 2012, after a video on YouTube showed him making a speech celebrating the death of the then-interior minister.

Three years earlier he called for the oil-rich Eastern Province’s Shiite-populated Qatif and Al-Ihsaa governorates to be separated from Saudi Arabia and united with Bahrain.

Demonstrations outside the Saudi embassy and at Palestine Square in Tehran attracted around 1,500 people Sunday, with chants of “Death to the House of Saud”.

“His death will start a revolution which hopefully will lead to the fall of the Saudi family,” said Rezvan, a 26-year-old in a traditional black chador who declined to give her last name.

On Baghdad’s Palestine Street, Iraqi cleric Ahmed al-Shahmani said: “The House of Saud has opened the gates of hell on its own regime.”

In Bahrain, where authorities defended Saudi Arabia along with other Gulf allies of Riyadh, police used buckshot and tear gas against Shiiite protesters who threw petrol bombs. Arrests were reported.

Executions have soared in Saudi Arabia since King Salman ascended the throne a year ago with 153 people put to death in 2015, nearly twice as many as in 2014, for crimes ranging from murder to drug trafficking, armed robbery, rape and apostasy.

Human Rights Watch said the mass execution was the largest since 1980, when 68 militants who had seized Mecca’s Grand Mosque were beheaded, and called it a “shameful start to 2016”.

But on Sunday Jubeir said those executed had received “fair and transparent” trials and were convicted of carrying out “terrorist operations that led to the deaths of innocents.” – Abdul Hadi Habtor with Arthur MacMillan in Tehran, Iran, AFP / Rappler.com