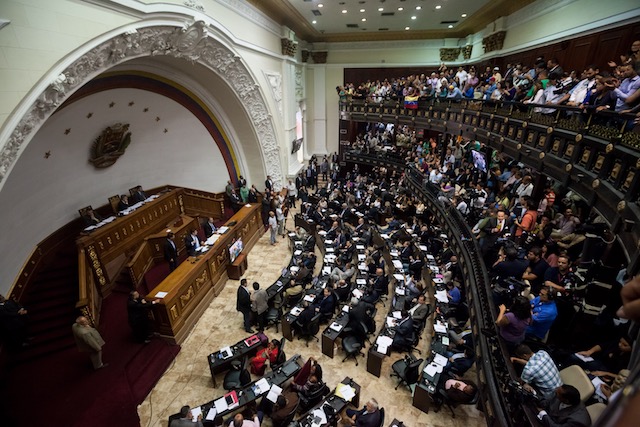 The opposition has vowed to find a way to get rid of Maduro within 6 months.

It has taken control of the National Assembly for the first time since 1999, the year the late socialist leader Hugo Chavez came to power.

At its first regular legislative session on Wednesday, the opposition-controlled assembly swore in 3 anti-government lawmakers, defying Maduro who had secured a court injunction to suspend them.

The 3 extra deputies boost the total number of opposition seats in the legislature to a 2/3 “supermajority” that could enable them to remove Maduro by constitutional means.

The government side vowed to charge the opposition with contempt of court.

Opposition leaders earlier had portraits of the socialist government’s hero Chavez removed from the assembly building.

“I don’t want to see portraits of Chavez or Maduro. Take all this stuff away to the presidential palace, or give it away,” the new speaker, Henry Ramos Allup, told workmen who were removing the portraits, in a video released by his staff.

He said his side would within 6 months propose a way “to change the government by constitutional means.”

Maduro responded: “I will be there to defend democracy with an iron hand. They will not make me give ground or waver.”

But on Wednesday, he announced a reshuffle of his government.

In elections on December 6, the opposition MUD coalition won a majority in the assembly for the first time in nearly 17 years.

Under Venezuelan law, with a 2/3 majority, the opposition could from next April launch measures to try to force Maduro from office before his term ends in 2019.

But it was not clear whether they will succeed in pushing ahead at odds with the court injunction.

The government side insisted any legislation passed with the votes of the suspended deputies would be null.

Cabello said the government would “paralyze” the assembly by withholding its budget from the treasury.

“No change of government is easy. Everything will depend on the situation in the country in a few months,” said Juan Manuel Rafalli, an expert in constitutional law.

“I foresee great social conflict and enormous pressure for change.”

One of the first measures the opposition wants to pass is an amnesty for some 75 political prisoners, but Maduro has vowed to veto that move.

The US State Department backed the call for political prisoners to be released, with spokesman John Kirby calling Tuesday, January 5, for a “transparent” resolution of the dispute.

Venezuelan Foreign Minister Delcy Rodriguez rejected that as “interference,” in a Twitter message.

December’s election result was widely seen as a protest by voters over the state of Venezuela’s economy.

It threw up the toughest challenge to the president’s authority and Chavez’s socialist “revolution” since Maduro took over from his late mentor in 2013.

Venezuela has the world’s biggest known oil reserves but has suffered from a fall in the price of the crude on which its government relies.

It is in deep recession, with citizens suffering shortages of basic goods and soaring inflation. Now they face the uncertainty of a political conflict.

“If the government uses its institutional control in a focused way, it could get its way in the short term,” said analyst Luis Vicente Leon, head of polling firm Datanalisis.

“While the Chavistas and the opposition get involved in a political debate, the people will feel a great lack of solutions to their main problems.” – Maria Isabel Sanchez, AFP / Rappler.com