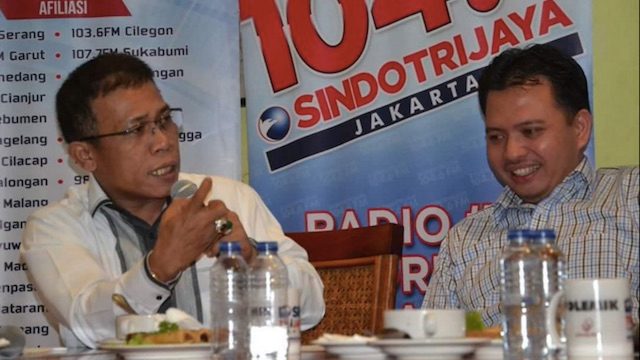 JAKARTA, Indonesia – An Indonesian lawmaker is in hot water after he allegedly assaulted a member of his staff.

Parliament member Masinton Pasaribu of the PDI-Struggle (PDI-P) party was reported to the National Police criminal investigation unit on Saturday, January 30, after being accused of hitting his expert staffer Dita Atidya.

The National Democratic Party (Nasdem), which is part of President Joko Widodo’s coalition, is involved as well, providing legal guidance for Atidya who is also a member of the party.

Pasaribu was accused of hitting Atidya in her face after picking her up from a bar in Bikini, Central Jakarta. Pasaribu reportedly accused her of spying on him for Nasdem, angering the lawmaker.

Pasaribu has denied the allegations saying another member of his staff, Abraham, accidentally hit Atidya’s face when Abraham tried swatting her hand away, after Atidya drunkenly tried to grab the steering wheel.

Nasdem said it also has plans to file a report with the House Ethics Council (MKD).

Despite the party’s involvement however, Chairman of Nasdem in Parliament, Victor Laiskodat, told Rappler on Sunday that the party will not intervene in decisions related to the settlement of the case, including if Atidya chose to settle amicably.

“It’s a personal matter. If the victim chose to forgive him, she can go ahead. We will not interfere,” he said.

Pasaribu and Atidya have yet to respond to calls and text messages from Rappler. – Rappler.com