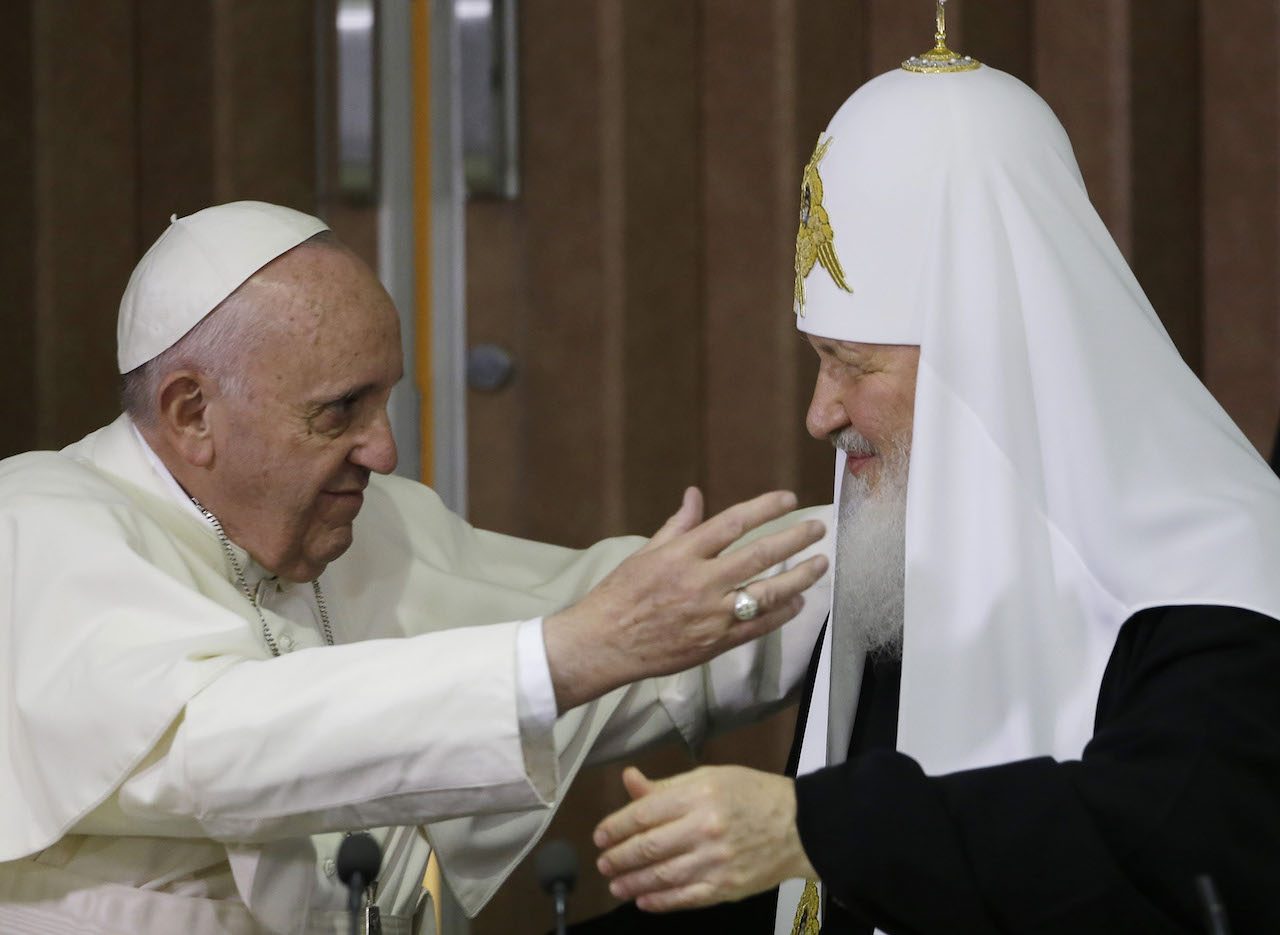 “For nearly one thousand years, Catholics and Orthodox have been deprived of communion in the Eucharist,” they said in a joint declaration signed after talks in Cuba.

“We are pained by the loss of unity, the outcome of human weakness and of sin.” (READ: Pope Francis urges healing of Catholic, Orthodox split)

It was the first meeting between the heads of the Eastern and Western churches since the great schism of 1054 when the churches split apart, with the Eastern church rejecting the authority of Rome.

“Mindful of the permanence of many obstacles, it is our hope that our meeting may contribute to the re–establishment of this unity willed by God,” the church leaders said.

Their meeting was driven by rising violence in recent years in the Middle East, where Christian communities have suffered violence at the hands of extremists.

“We call upon the international community to act urgently in order to prevent the further expulsion of Christians from the Middle East,” they said.

“In many countries of the Middle East and North Africa whole families, villages and cities of our brothers and sisters in Christ are being completely exterminated,” they went on.

“We wish to express our compassion for the suffering experienced by the faithful of other religious traditions who have also become victims of civil war, chaos and terrorist violence.”

The 79-year-old Francis, in white robes and a skullcap, and Kirill, 69, in black robes and a white headdress, earlier kissed and embraced before sitting down smiling for the historic meeting at Havana airport.

Between them, they are the spiritual leaders of more than 1.3 billion Christians.

“At last we meet. We are brothers,” said the pope as he met the white-bearded Orthodox leader. “Clearly, this meeting is God’s will.”

The meeting on neutral ground – hosted by the communist, atheist Cuban leadership of Raul Castro – was decades in the planning, with the final obstacles swept away by the pope’s determination and global politics.

“I just wanted to embrace my Orthodox brothers,” he said in an interview this week.

But he also framed the encounter in a broader context of engaging Russia, saying Moscow could be an important partner for peace in the world.

Francis has twice received Russia’s President Vladimir Putin at the Vatican. The Russian leader has clashed with other powers recently over the conflicts in Syria and Ukraine.

The Orthodox Church’s refusal to accept the primacy of the Roman pontiff has long been the primary barrier to a rapprochement between the Roman Catholic and Orthodox churches.

Now there are also tensions over the perceived evangelism of the Catholic Church in Eastern Europe.

The conflict in Ukraine has pitted Ukrainian Catholics loyal to Rome against separatists who are mostly Russian Orthodox.

Meanwhile, violence by armed Islamist groups has surged in the Middle East and North Africa.

“The international community must undertake every possible effort to end terrorism through common, joint and coordinated action,” the declaration read.

“We exhort all Christians and all believers of God to pray fervently to the providential creator of the world to protect his creation from destruction and not permit a new world war.”

The church leaders warned against the rise of secularism and said European integration must respect religious identities.

“While remaining open to the contribution of other religions to our civilization, it is our conviction that Europe must remain faithful to its Christian roots,” they said.

Francis left after the meeting for a tour of Mexico, while Kirill continued a visit to Cuba, Brazil and Paraguay.

Francis’s arrival in Mexico was set to be a luminous affair, with hundreds of thousands of well-wishers expected to line the 12-mile (19-kilometer) route from the airport to the Vatican ambassador’s residence in Mexico City.

Believers planned to light up the road Francis’s popemobile will travel with their mobile phones or hand-held torches, creating what local organizer Roberto Delgado described as a “wall of light and prayer.” – Jean-Louis De La Vaissiere, AFP/Rappler.com